BenFest at Gigantic Brewing, DIY Invitational at Growler’s Taproom and the rest of Portland area beer events for the week of September 7th.

Pints for Pits
4 pm-Midnight Friday Sept. 8, Lompoc Sidebar, 3910 N. Williams Ave;
The Lompockians are sponsoring a fundraiser for Born Again Pit Bull Rescue, whose mission is to save lives by keeping dogs out of local shelters through spay and neuter assistance, owner and shelter support programs, and community education. You can meet organization reps, drink Lompoc beer including their just released Oktoberfest, win raffle prizes, and learn more about this good-hearted organization. Lompoc will donate 10 percent of sales from that day to pit bull rescue. 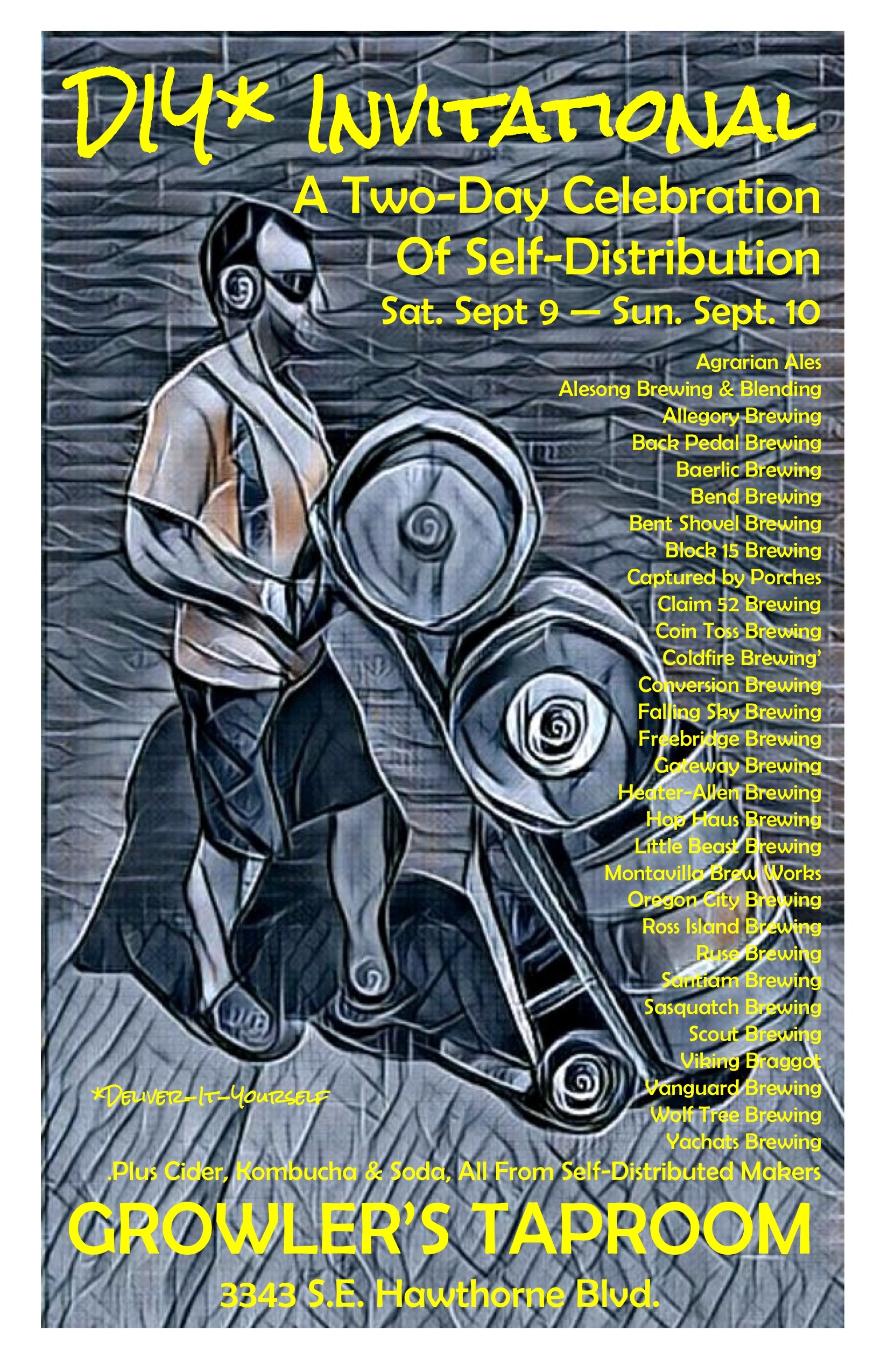 DIY Invitational
11 a.m.-11 p.m. Saturday Sept. 9 and Sunday Sept.10, Growler’s Taproom, 3343 S.E. Hawthorne St.; free admission.
Southeast Portland’s new pub and beer garden honors Oregon’s self-distributed breweries, cideries, kombucha and soda makers with the DIY Invitational: A Two-Day Celebration of Self-Distributed Beverages. All 30 of the pub’s beer taps, five cider/mead taps and kombucha and soda taps will be pouring drams from companies who make, sell and deliver their own goods without the help of a wholesale distribution partner.
The event is the brainchild of Growler’s bartender Jim Parker, who has worked for several self-distributed breweries and last year organized a series of Selfie-Fest Roadshow tap takeover events. The idea, he says, is threefold: To show appreciation to the number of fiercely independent self-distributed breweries in the state; to educate beer drinkers on the distribution system. “Most people don’t realize, when they look at a tap list, that some of the brewers up there had to work harder and beat longer odds to get their beer on that board,” he said.
Beers will be available in 4-, 12- and 16-ounce pours. During the fest, brewers will also be competing in the Growler’s Intergalactic Cornhole Championships in the beer garden.

Eighth Annual BenFest
1-8 pm Saturday Sept 9, Gigantic Brewing 5224 SE 26th Ave.;$30 includes admission, glass and 10 tix. 21+ only
Portland’s has a boatload, a burgeoning bounty of brewers named Ben, so why not have a festival about it? BenFest rapidly became a favorite event of the Portland beer year and this year’s — the eighth– has a job to do: earlier this year one of our favorite Bens — Ben Flerchinger, longtime brewer with the Lucky Lab, Gigantic and 54-40 — died suddenly so this year’s edition will serve as the fundraiser for his family to help with end of life expenses. Even though, BenFest and the beer community will not be the same without him, organizers are making this year’s celebration the biggest yet. Besides the breweries with a Ben participating, many awesome brewers are also sending great beer. 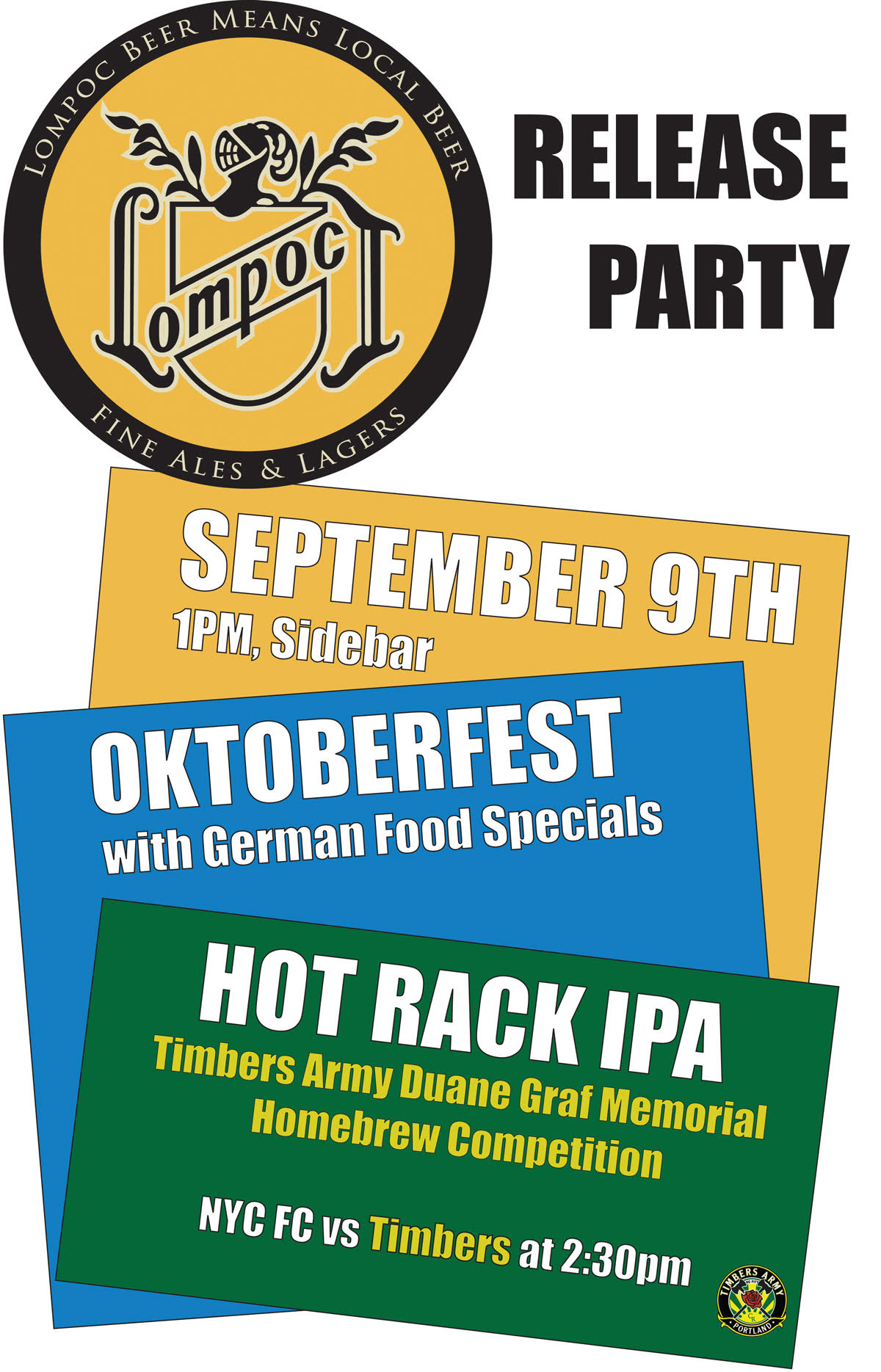 Lompoc Oktoberfest and Hot Rack IPA Release
1 p.m. Saturday Sept. 9, Lompoc Sidebar, 3910 N. Williams Ave;
Lompoc Oktoberfest is one of my favorite iterations of the style, a 5 percent German style lager that is pale orange in color with a clean malt flavor balanced by a touch of Perle hops. A portion of the grain used was roasted in the oven at Lompoc’s Fifth Quadrant, giving a slight biscuit flavor. There will also be German themed food specials available at the event.

11th Annual Slabtown Community Festival
11 am-5 pm Saturday Sept. 9, McMenamins 23rd Ave. Bottle Shop, 2290 NW Thurman St.; all ages OK, 21 and older to sample.
The bottle shop crew will be pouring samples of Ruby, Hammerhead and their seasonal cider, plus root beer for the kids at the festival site in the parking lot at NW 23rd/Thurman St. Inside the Bottle Shop, all apparel and McMenamins logo items will be 20% off during the event… and there will be a McMenamins Passport Discovery Hunt – solve the clues, get a prize, and be entered to win an overnight stay at one of McMs historic hotels. 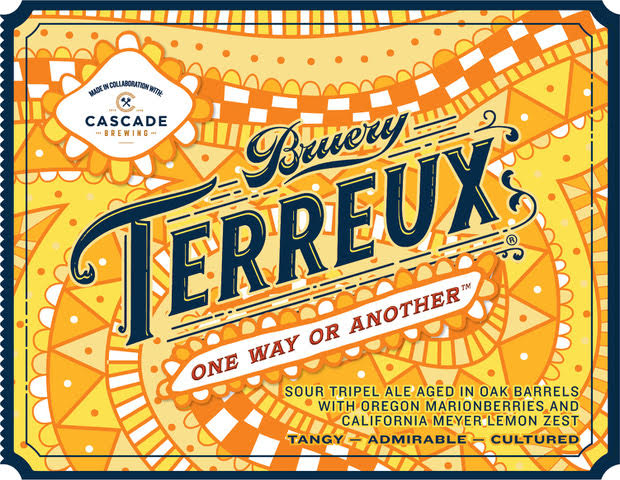 One Way or Another Release Party
5-11 p.m. Tuesday Sept. 12, Cascade Brewing Barrel House, 939 SE Belmont St.;
Cascade Brewing and Bruery Terreux are each releasing a version of their long-awaited collaboration beer, One Way or Another,  a blend of sour triple ales aged in oak wine barrels for up to 16 months with regional ingredients including Oregon marionberries and California Meyer lemons (7.9% ABV). Last spring, the crew from Bruery Terreux visited Cascade, AKA the House of Sour, to discuss the blend and to brew the first batch of what was to become One Way or Another. The following week, Bruery Terreux replicated the same recipe in their brewery in Anaheim, Calif. The two brewery projects feature different labels and graphics to delineate between the two. Tuesday’s release party features both collaboration beers, plus seven Bruery Terreux beers on tap, vintage Cascade Brewing bottles for sale, and a special live tapping with members of the Bruery Terreaux team.