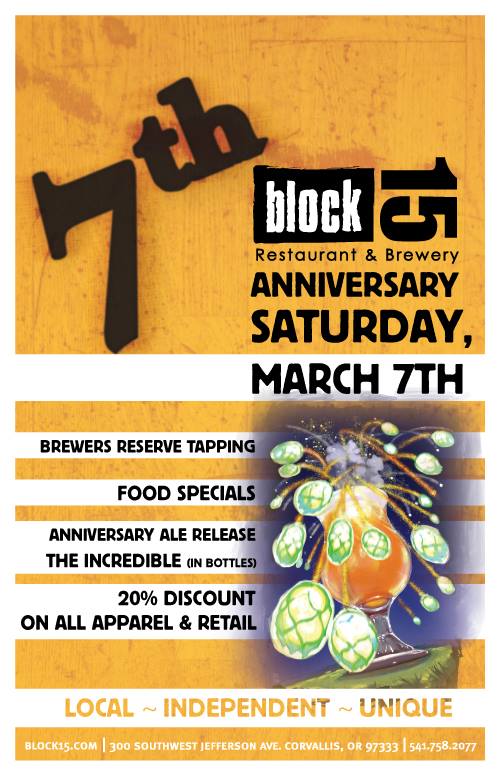 All things will be turning up lucky this Saturday in Corvallis, Oregon last Block 15 Restaurant & Brewery will be celebrating its 7th Anniversary.

Its hard to believe that Nick Arzner and his crew have been going at it for the past 7 years. It takes a lot of work to brew some quality beverages in the tight, basement space that is home to its current brewery. However, the brewery will be enlarged when its production brewery is finally up and running in the Corvallis Industrial Park on the south side of town.

But before this expansion happens Block 15 is excited to host its 7th Anniversary on Saturday, March 7th. What’s in store is a great day filled with Brewers Reserve tappings, food specials and the release of Block 15’s Anniversary Ale, The Incredible Imperial Double IPA.

This is our second time brewing and first time bottling The Incredible, a luscious Imperial Double IPA. Deliciously hoppy and strong The Incredible is inspired by Sticky Hands, our Hop Experience Ale, and brewed with pale & pilsner malts, a unique hop blend, and privately banked brewer’s yeast.  The incredible aspect of this beer is not face melting hops, but rather the balance of copious hop characters, supporting malt, and crisp water treatment.
11% ABV $7.25/500 ml, limit 4

There will also be a few Brewer’s Reserve Tappings during the anniversary. Block 15 will be pulling out some gems from its Brewer’s Reserve. Beginning this weekend and continuing through March, Block 15  will rock two taps with beer cellared over the past seven years.  Leading off is Batch #30 Super Aboriginale and 2012 Provisions.

This is also a great time to stock up on Block 15 apparel as this will be discounted 20% on Saturday. Its the brewery’s gift to its loyal patrons.