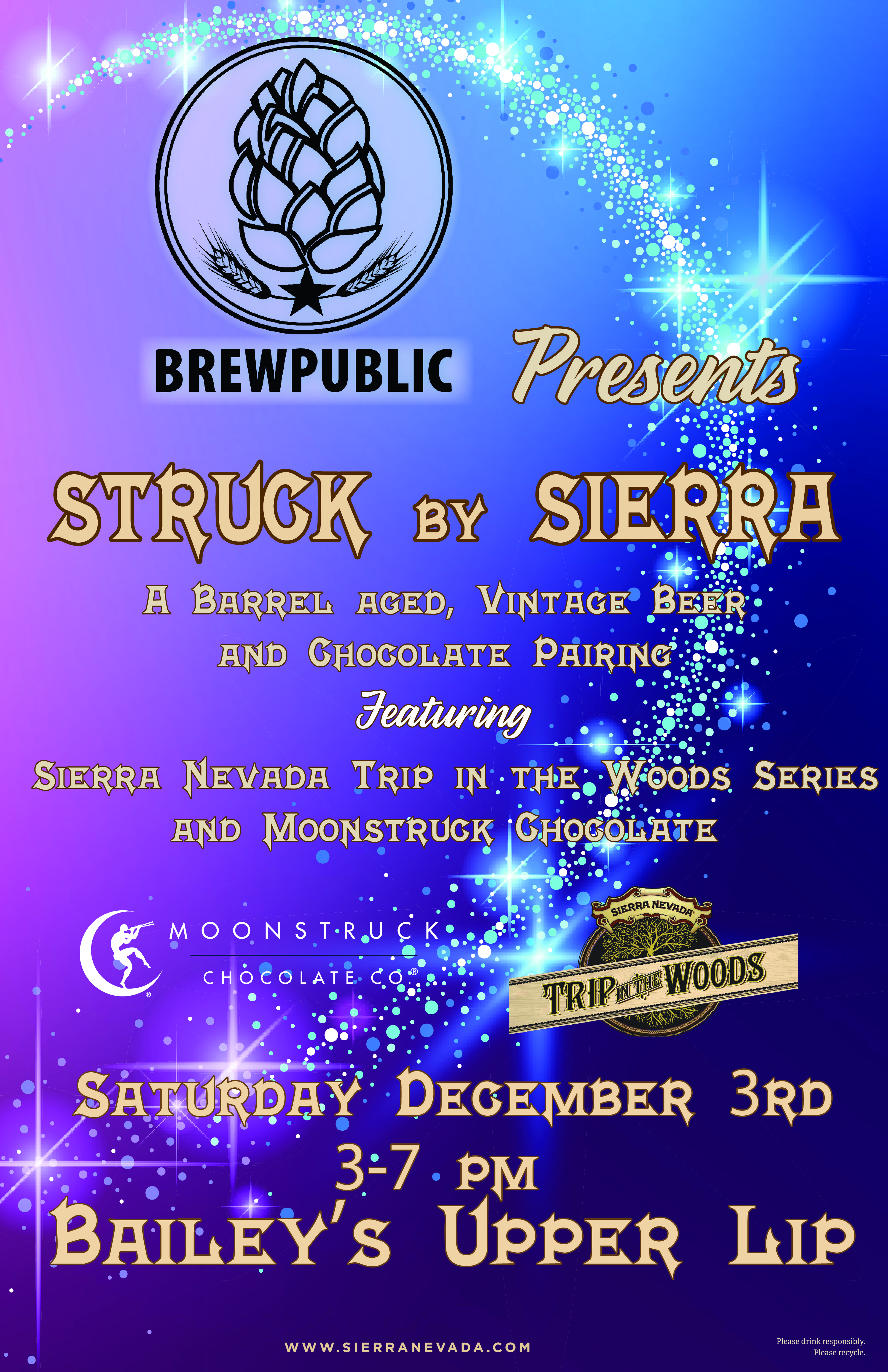 As Bailey’s Taproom and The Upper Lip close out its Dark Days, a week of featured barrel-aged beers, it will do so on Saturday, December 3rd with one event that is sure not to miss. BREWPUBLIC Presents Struck by Sierra: Moonstruck & Sierra Nevada Beer & Chocolate Pairing at The Upper Lip. Taking place from 3:00 to 7:00pm, Sierra Nevada Brewing will be taking over all six taps at The Upper Lip featuring its Trip In The Woods Series of barrel-aged beers paired with Moonstruck Chocolate.

Sierra Nevada Brewing recently debuted its new Trip In The Woods series of barrel-aged beers that includes Barrel-Aged Narwhal with Red and Black Currants, Barrel-Aged Bigfoot with Ginger, and Barrel-Aged Bière de Garde. All three of these beers will be on tap for this event and the only place in Portland that will be doing so. Its Barrel-Aged Biere de Garde recently received Third Place at the 2016 Festival of Wood and Barrel Aged Beers in Strong Pale Beer category. Local Sierra Nevada Area Sales Manager, Kat Finn will be at The Upper Lip to answer any questions on the brewery that’s been brewing since 1979.

And if pouring these three barrel-aged Sierra Nevada beers and three other tasty offerings from the highly regarded brewery from Chico, California, we have also brought in Portland’s hometown Moonstruck Chocolate into the fold. Moonstruck has been producing handcrafted, artisan chocolates since 1993. For Struck by Sierra, Moonstruck Chocolate’s master chocolatier, Julian Rose will be on hand and has craftily paired each of the six beers with chocolates that he helped develop.

A little over a year ago, Julian was the mastermind behind the successful Oregon Craft Brewers Truffle Collection from Moonstruck Chocolate. (Read more about this collection from our review here.) Julian will also be selling chocolates such as bars and beer truffles and a few assorted selections. With Christmas on the horizon this sounds a great excuse to come enjoy some great beers paired with some fine chocolates!

Here are the beers that will be on tap during Struck by Sierra.

Trip In The Woods Series:

Other Sierra Nevada Beers On Tap:

Entry to Struck by Sierra is free and the pairings will take place from 3:00 to 7:00pm.