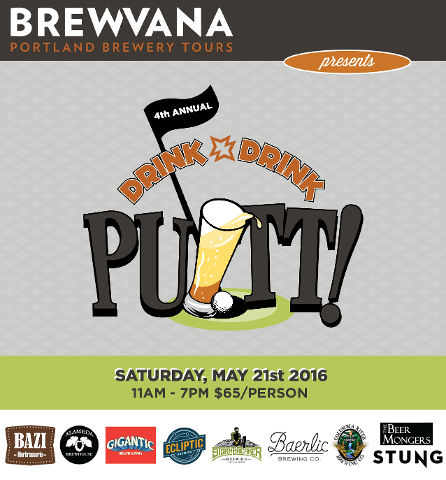 Get your short game ready for the return of the BREWVANA 4th Annual Drink Drink Putt when it takes over nine taprooms and bars across Portland on Saturday, May 21st! Drink Drink Putt will take 36 teams of four across eastside of Portland where players will putt their way to victory with a beer in hand.

Drink Drink Putt will begin at 11:00am. Each golfer will receive a swag bag that consists of a beer-tasting mug, nine 6-oz beer tokens, and transportation between various holes, scorecard, map, pretzel necklace, and an invitation to the awards ceremony at Columbia River Brewing.

Entry into Drink Drink Putt is $65 per person, however registration is required in groups of two ($130) or four ($260). When registering in groups of two organizers will pair up other groups of two to create a foursome. Space is limited and tickets must be purchased in advance. Register your team today by clicking here.

After all the putting is completed there will be a gathering at Columbia River Brewing‘s Taphouse. Prizes will be given to the winning team, and players are also encouraged to get decked out in their snazziest golf attire for a chance at winning Best Costume. Both prizes, along with a Best Hole award for the brewery with the most creative hole, will be announced at 7:00pm immediately after the event. Attending the award ceremony is optional and winners not present will be able to pick up their prizes on a later date.