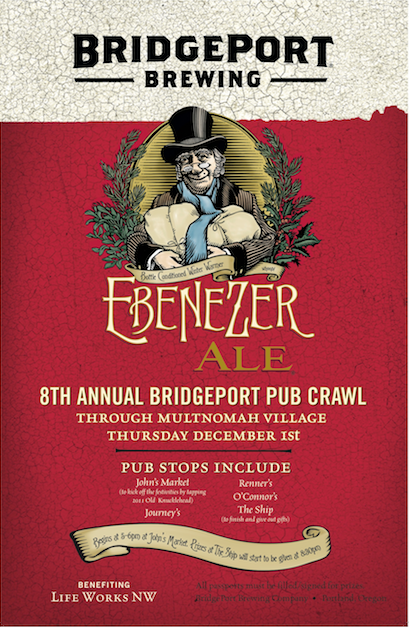 Welcome in December in true holiday spirit with BridgePort Brewing and its 8th Annual Ebenezer Pub Crawl in Portland’s Multnomah Village on Thursday, December 1st. The crawl begins at 5:00pm at John’s Marketplace and then continues on to Journey’s, Renner’s, O’Conner’s, and finish up at The Ship. This year’s pub crawl will be accepting donations benefiting Life Works NW.

Each location will be serving up BridgePort’s longtime winter seasonal, Ebenezer Ale. This festive beer is always a favorite of ours here at Brewpublic and this year’s version is no exception. Ebenezer Ale is 6.4% ABV and 40 IBUs.

When the Ebenezer Pub Crawl kicks off at John’s Marketplace, the great beer destination will be serving up BridgePort’s 2011 Old Knucklehead Barleywine until 6:00pm when the pub crawl continues on to Journey’s. Make sure to grab your Ebenezer Pub Crawl Passport while at John’s Marketplace and get it stamped at all locations to enter to win your chance at some prizes at the pub crawl’s last stop at The Ship beginning at 8:30pm.

Stay up to date on the 5th Annual Ebenezer Pub Crawl by following its Facebook Event Page.