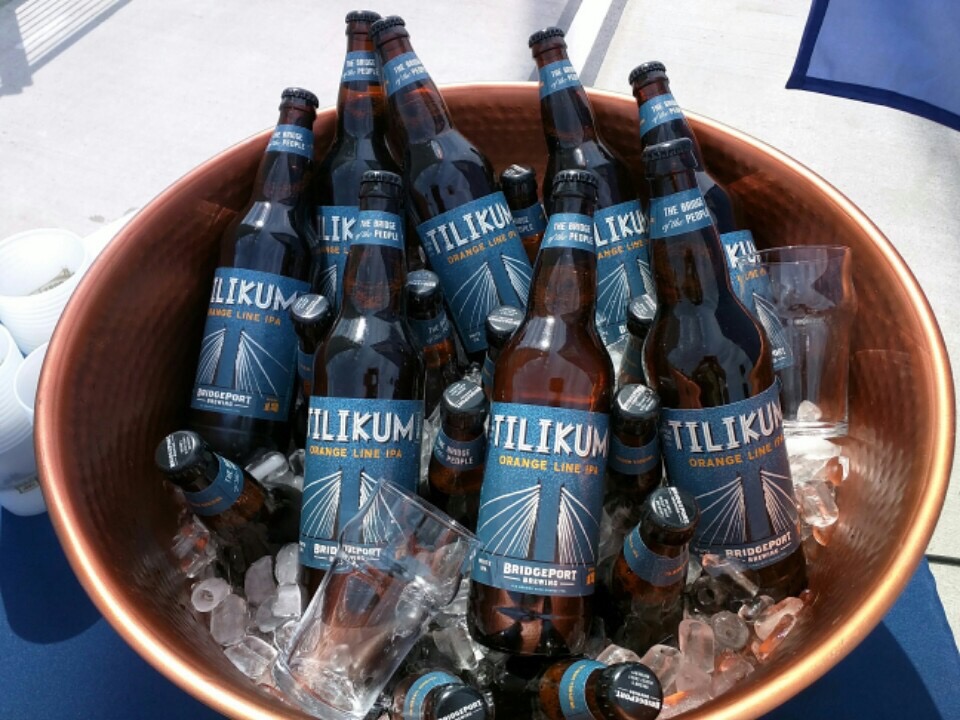 Last week BridgePort hosted a private event atop Portland’s 12th bridge, Tilikum Crossing that featured Congressman Earl Blumenauer and BridgePort Brewer Eric Munger as the pair announced the partnership between BridgePort and TriMet as the first-tastes of Tilikum Crossing Orange Line IPA were sampled. It is quite fitting that Oregon’s oldest craft brewery named after the 11 bridges in our city has the official beer of Tilikum Crossing.

The Tilikum Crossing Orange Line IPA, the official beer of Portland’s newest bridge, is Bridgeport’s first ever White IPA. Dry-hopped with Lemondrop hops for aroma, this beer is made with 25% wheat, giving the beer a hazy light color. This new brew also uses Belgium yeast and is infused with orange peel, delivering a slightly sweet, lighter and more refreshing take on an IPA. Tilikum Crossing Orange Line IPA is available in a limited release on draft and in 22oz bottles.

BridgePort began brewing test batches of this beer back in February while the brewers were inspired by the vivid white colors of the bridge and the upcoming TriMet Orange Line that will use the bridge. “Our team thought a lot about the actual visuals of Tilikum Crossing, specifically, the white-coloring of the bridge and TriMet’s Orange Line that will cross over the Willamette. With that in mind, we also wanted to make a beer for the people, since ‘Tilikum’ means ‘of the People’”, states Jeff Edgerton, BridgePort brewmaster.

In the two clips below from Nick Rivers, BridgePort Brewer Munger discusses the beer in more detail while continuing to taste the beer alongside Congressman Blumenauer. The final version of Tilikum Crossing Orange Line IPA was finalized on the brewery’s sixth take when the brewers finally got what they originally visioned.

Plus, don’t miss out on some of the other events celebrating Portland’s newest bridge that will be taking place over the next few weeks leading up to the official opening of Tilikum Crossing on Saturday, September 12th.

The Tilikum Crossing, Bridge of the People is the first bridge of its kind in the U.S., carrying MAX light rail and Portland Streetcar trains, buses, bicyclists and pedestrians, but no private vehicles. Tilikum Crossing is part of TriMet’s MAX Orange Line that opens on September 12, 2015 between Downtown Portland, South Waterfront, SE Portland, Milwaukie and North Clackamas County. The Orange Line will improve transit and make more connections for riders and expands the MAX system to 60 miles and 97 stations.For more information about the MAX Orange Line, visit catchtheorange.com.