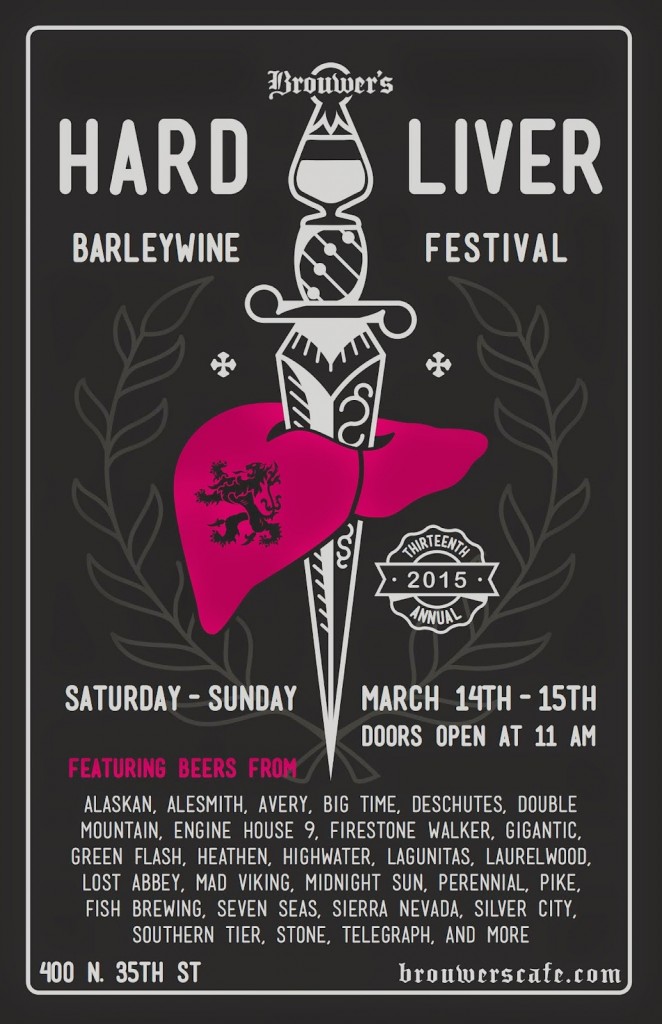 Originally dating back to being held at the Phinney Ridge Neighboorhood Center for its first few years it is now held at Brouwer’s Cafe since they opened its doors almost 10 years ago. This year’s event will feature over 45 barleywines so its time to begin preparing for this lineup.

Doors will open each day at 11:00am on March 14th and 15th. But if you want in you better make your preparations early as the entry line for this annual fest can be long and tedious. However, once inside this festival is one that any fan of big, bold barleywines will truly be fascinated with.

This year’s Hardliver Barleywine draft list is quite impressive and will consist of the following.

This is quite the list of barleywines. How does one decide which ones to order? Better start preparing now.

Then on Saturday, March 28th and Sunday, March 29th, Brouwer’s Cafe will be hosting its 10th Anniversary Party. Back in 2005, Matt “Vern” Vandenbergh brought what he had learned from Bottleworks bottleshop, at the time already into its 5th year, and created Brouwer’s Cafe.

It was back on March 23, 2005, when Brouwer’s opened its doors to the public. This is one of Seattle’s best known beer bars that now features over 60 taps, 300 bottles, a wide selection of whisky (and whiskey) and a menu based around the hearty and delicious cuisine of Belgium.

From the beginning the crew at Brouwer’s knew that they had created something special and worked with local breweries to brew a special anniversary beer each year for its anniversary. For its 10-year milestone Brouwer’s has teamed up with Ballard’s Reuben’s Brews.

Teaming up with Adam Robbings of Reuben’s, this anniversary beer is going to be a hophead’s dream. Brouwer’s 10th anniversary beer will be an Imperial IPA that has been named Gobsmacked. This 10% ABV IIPA will be available in a very limited number of bottles, as well as on draft.

To make the 10th Anniversary even more special, the crew from Brouwer’s traveled to Fort Collins, CO to work with New Belgium Brewing on a special beer. This draft only release is a blend that was produced under the guidance of New Belgium’s Eric and Lauren Salazar. After tasting from over 20 different foudres, a special 10th Anniversary beer was blended.

Look for this beer in limited supply for Brouwer’s 10th Anniversary along with a few other delights that will be pulled from its cellar. It looks to be a great time to be in Seattle.