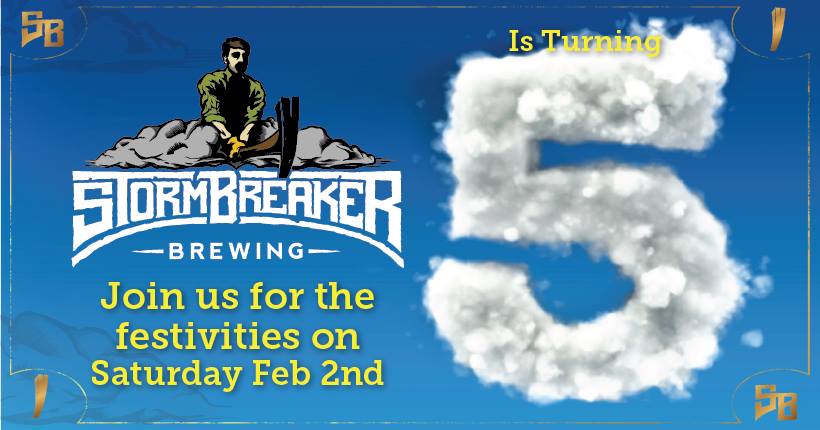 It’s been five years since StormBreaker Brewing took over the former home of the now defunct Amnesia Brewing. On Saturday, February 2nd the brewery will celebrate its 5 Year Anniversary at its brewpub on North Mississippi. The daylong celebration will feature a new beer releases, family entertainment and some axe throwing to get out any pent-up anger you may have inside you.

In time for the anniversary, StormBreaker will tap its 5th Anniversary beer, Fiver IPA. This anniversary IPA is all about their five-year mark as it was brewed with 555 lbs. of 5 different grains, 5 different hops, and 5 lbs. per barrel of total hops. StormBreaker used 5 of their favorite hops; Citra, Falconers Flight, Mosaic, Vic Secret, and Wai-iti to create this West Coast meets Southern Hemisphere combination IPA that sits at 6.7% ABV and 62 IBUs.

The brewery will also be hosting family friendly entertainment throughout the day with Mr. Statue standing around for photo ops, Alexander Master of Marvels strolling around the restaurant performing mystifying magic tricks, and the King himself, Elvis. There will also be plenty of raffles prizes!

StormBreaker will also be partnering with Portland Axe Throwing as they will set up shop in the early evening with their mobile unit. This will give everyone an opportunity to see what all the fuss is about at their second location in St. Johns, which is now home to 4 permanent axe throwing lanes.