March 29, 2017 – Bend, Oregon – How do you take the biggest mobile block party – Deschutes Brewery’s Street Pub tour – and make it even better?  By partnering with three of Oregon’s most beloved companies to bring new energy and activities to fans in five U.S. cities. This year, the brewery has added title partners that share its culture, sustainability and philanthropic goals: Hydro Flask, Humm Kombucha and KEEN Footwear. In each visited city, these three like-minded companies will join Deschutes to partner with nonprofits and raise funds to help them achieve their missions. Over the last two years, Deschutes’ Street Pub tours have raised more than $835,000. 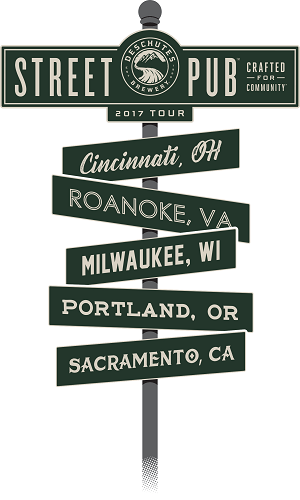 Joey Pleich, field marketing manager for Deschutes Brewery said, “All of the communities where we have taken Street Pub have responded with overwhelming support. With more than 140,000 in attendance at over seven events last year, we knew it was time to take it to the next level. This year, the event will feature even more taps at new bar locations, the Deschutes ‘Worth Sharing Challenge’ (head-to-head team competitions), some incredible street artists and our new title partners all working together toward one mission: elevate the community impact and raise even more dollars for deserving nonprofits!”

“The World’s Largest Pop-Up Pub” brings the pub experience to the people across the country in 2017:

The 400-foot-long Street Pub will pour a huge selection of Deschutes Brewery beers, including its famed Mirror Pond Pale Ale, Black Butte Porter, Fresh Squeezed IPA as well as its highly coveted Reserve Series beers such as The Abyss. True to the brewery’s full pub experience, food will be a major part of the equation. Deschutes’ corporate executive chef (Jeff Usinowicz) will team up with local chefs in each city to create some fantastic food pairings. Live local bands will round out a memorable experience in each city.

Deschutes’ title partners will undertake unique endeavors, including family friendly activities, at each Street Pub, including:

Find out more at http://www.DeschutesBrewery.com/StreetPub and join the conversation at #StreetPub. See more about Street Pub here:

About Deschutes Brewery
Family and employee owned since 1988, Deschutes Brewery – Bend’s original brewpub – has become the cornerstone of Central Oregon’s flourishing craft brew culture. Known for its generous use of whole hops in its defining beers such as Black Butte Porter, Mirror Pond Pale Ale,and Fresh Squeezed IPA, the brewery also keeps fans on the edge of their bar stools with the release of small batch experimental beers each season. Now available in 29 states and Washington D.C., Deschutes’ flagship brewpub has been joined by a main brewing facility overlooking the Deschutes River in Bend, a pub in Portland, and coming in 2021, a new east coast brewery in Roanoke, Virginia. www.deschutesbrewery.com

About Hydro Flask
Hydro Flask is the award-winning leader in high-performance, insulated stainless steel beverage and food flasks. Founded in 2009 in Bend, Oregon, Hydro Flask is committed to bringing customers Unexpected Refreshment each and every time through the unique combination of temperature, taste and transport. Every bottle features TempShield™ double wall insulation to keep beverages at the desired temperature, 18/8 pro-grade stainless steel to ensure pure and refreshing taste, and durable powder coat and ergonomic design for the ultimate in transport. Hydro Flasks are stylish, BPA-free, recyclable, and backed by a lifetime warranty. Our new giving program, Parks for All, supports the development and maintenance of public green spaces, so people everywhere can live healthier, happier and more fulfilled lives. Learn more about Hydro Flask, Parks for All, and our mission to save the world from lukewarm at https://www.hydroflask.com.

About Humm Kombucha
Founded by Jamie Danek and Michelle Mitchell in 2009 as Kombucha Mama, Humm Kombucha rebranded in 2014 in anticipation of rapid expansion. From the company’s early days brewing in the founders’ kitchen through its expansion to a new full-scale brewery, Humm Kombucha has remained focused on core values of Optimism, Healthy Business, Partnership and Quality. Humm can be found in grocery stores, gas stations, convenience stores and restaurants in bottles and on tap in all 50 states — and now in Sweden. Last year Humm unveiled Blue Wave, the Official Kombucha of the Seattle Seahawks.

About KEEN
KEEN Inc. is a values-led, independently owned outdoor footwear brand from Portland, Oregon with a mission to responsibly create original and versatile products, improve lives, and inspire outside adventure. Founded in 2003, KEEN ignited a revolution in the footwear industry with the introduction of the Newport sandal, launching the concept of Hybrid footwear into the market and setting KEEN on a path of driving consistent product innovation that exists today. KEEN strives to live by its values, from its products to its actions, and by activating communities and individuals to protect and preserve the places where we work and play. KEEN passionately endeavors to live fulfilling lives, challenge the status quo, do good, give back, and inspire others. Learn more at www.keenfootwear.com.