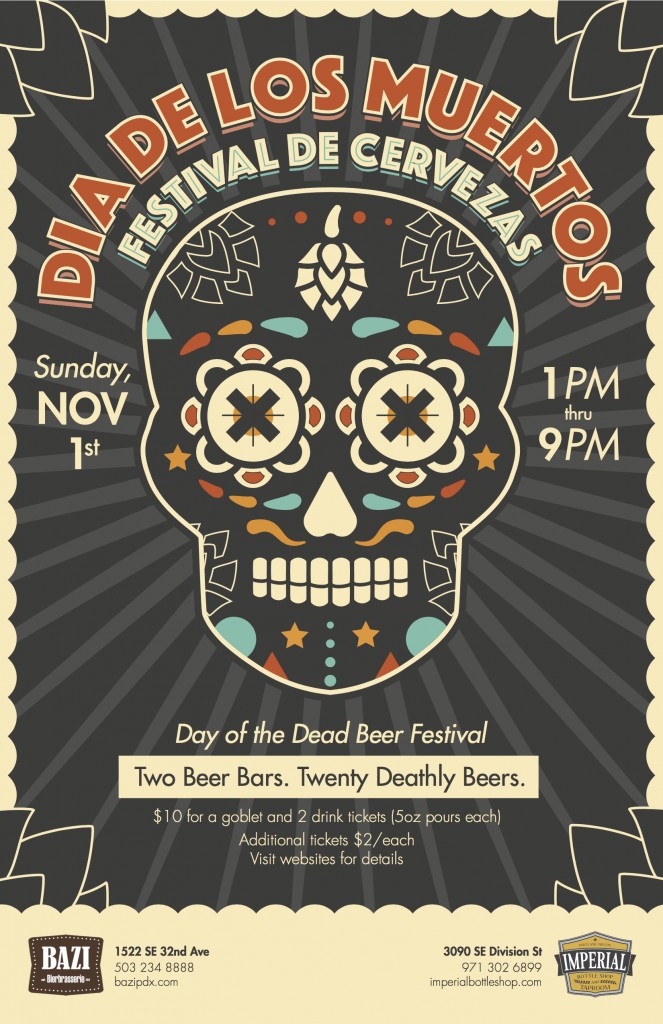 Portland, OR – On November 1st from 1-9 PM, Bazi Bierbrasserie (1522 SE 32nd Ave) and Imperial Bottleshop (3090 SE Division St) are joining forces to co-host the 2nd Annual autumn beer event, Día De Los Muertos Festival De Cervezas (All Souls Day Beer Festival).
As leaves fall to the ground, mankind throughout time has understood that nature’s cycles are mirrored in our lives. Autumn is a time to let go of the past and let death pave the way for new life. In that tradition, Día de los Muertos, celebrates the lives of the deceased with food, drink, and activities the dead enjoyed in life… and who doesn’t enjoy great beer!

The Día De Los Muertos Festival De Cervezas will take place concurrently at both locations offering festival goers the opportunity to walk less than half mile between the two and experience an eclectic mix of 20+ death-themed beers and ciders, face painting and live music. Beers named after the dead, and Mexican-influenced beers that pay homage to the country of the holiday’s origin.

While close in proximity, the two bars are far apart in their approach to beer. Bazi features Belgian-inspired beers from near and far, and Imperial focuses on local American craft beer.

For $10, attendees will get a commemorative glass goblet and two drinks tickets, each good for a 5 oz pour. Additional drink tickets will be offered for $2 each, and every drink ticket used will automatically get entered into hourly raffles for exciting prizes. Costumes are encouraged! Visit Eventbrite for advance tickets sales, and www.bazipdx.com or www.imperialbottleshop.com for the draft lineup.

If Monks lived in Portland, this would be their watering hole. Bazi brings centuries of Belgian inspired beer and food under one roof plus a premium liquor selection. Explore with a nationally recognized Bier-Cocktail or simply sip on a glass of wine. As a Euro-theme establishment we embrace bringing community together through sports. We are an official Thorns, Timbers and American Outlaws partner and showcase these and other events on our 114″ HDTV with surround sound. Named “Top 100 Beer Bars in America” by DRAFT Magazine in 20014 and 2015, and “Top Beer Bars in Portland” by The Oregonian in 2014. Located in the heart of the Hawthorne District, tucked away just off of SE 32nd Avenue.

Drink at Imperial’s beer-inspired bar, or take beer home to enjoy. Either way, you can choose from 16 local beers on tap and over 400 of the best bottled American craft beers. Whether you’re a seasoned beer drinker or new to craft beer, Imperial provides an enjoyable beer experience through helpful, friendly service and the most sustainable beer-drinking practices available. We were recently named one of “America’s 100 Best Beer Bars” by DRAFT Magazine, and “Best of Local Beer List in the NW” by Sip NW Magazine!