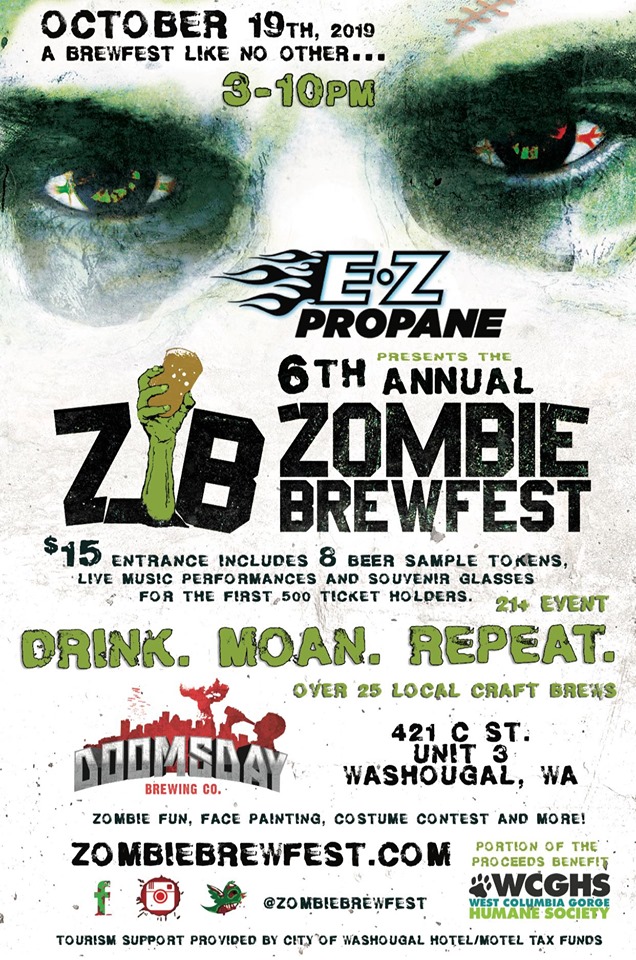 Beer and horror come together this weekend in Washougal, Washington at Doomsday Brewing for its 6th Annual Zombie Brewfest. Taking place on Saturday, October 19th from 3:00-10:00pm, Doomsday Brewing will host a day of over 25 craft beers to be served.

There will also be a zombie costume contest at 8:30pm. The Doomsday staff will pick five awesome costumes from the crowd, then the audience will vote for a winner. The first-place prize is a $50 gift card to Doomsday and the runner up will receive a free growler refill.

Don’ fret if you do not have a costume. Dawn Lotts from Glorified Glamour will assist with any makeup needs for the day. Prices will vary depending on what you would like done from $5 on up to $30+.

For the Food lovers we will have a Doomsday Brewing reduced menu including a small pizza menu, sausage dogs, pretzels and garlic bread.

Local Author, Joseph Zuko will be at Doomsday with his zombie book series. Live music all night long starting at 7:00 pm with 100 Proof and Conflict Radio at 9:30 pm.

Tickets to the 6th Annual Zombie Brewfest are $15 and includes a Zombie souvenir glass and 8 beer sample tokens. Admission is for those that are 21-and-over. In addition to the beer samples, admission also includes live music performances, access to food vendors and souvenir glasses for the first 300 ticket holders. Zombie Brewfest T-shirts available for purchase for $15.

A portion of the proceeds from Zombie Brewfest benefit West Columbia Gorge Humane Society, a nonprofit organization that helps animals.