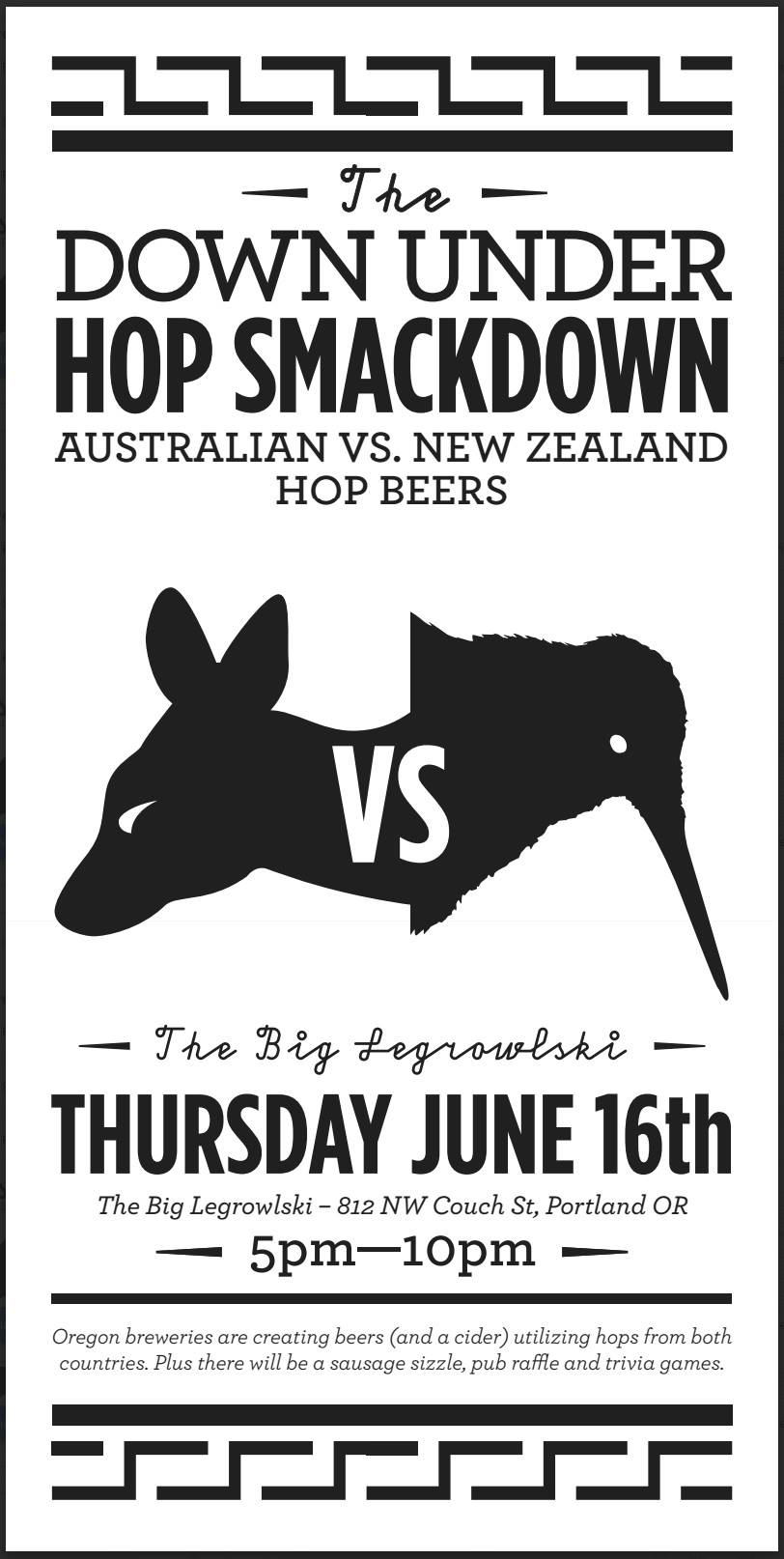 Thursday, June 16 marks the first-of-its-kind event in Portland, the Down Under Hop Smackdown showcasing hops out of Australia and New Zealand. The Southern Hemispheres answer to the Yakima and Willamette Valleys, hops from down under have experienced an explosion in popularity in recent years due to their versatility and unique aromas and flavors.

Some of Oregon’s best breweries use Kiwi/Aussie hops on a regular basis, while other beers have been brewed specifically for this event. A full list of beer/cider follows below.

Tickets:
VIP tickets are limited to online advance sales, with a limited number available at the door. VIP tickets are just $20 and include a limited edition Kiwi/Aussie pint glass, five 4 ounce samples, 2 raffle tickets and a sausage sizzle. VIP ticket holders receive 4oz samples for $1 each all night. If you’re not lucky enough to grab the VIP tickets, 3oz samples are available for $1, plus regular prices on pints.

Coalition’s Shrimp on the Barby American Blonde was the result of a Down Under home brewing competition held last month. Home brewers were asked to enter beers featuring down under hops, and the extremely close competition had Portland Brewers Collective members Jon and Parker Hall take first place with their American Blonde. Coalition has scaled up the recipe, and it will make its’ debut at the Smackdown.

The Sausage Sizzle:
A Sausage Sizzle is a classic Aussie/Kiwi fundraiser. On any given weekend, school kids and clubs around the two countries set up outside grocery and department stores and on street corners selling a banger, usually on white bread or a bun, with optional ketchup and grilled onions.

We will have classic Bangers from SP Provisions, but with a twist. The banger will be made using the official beer of Portland Beer Week, The Subcontinental IPA by Portland Brewing and Double Mountain Brewery and offered for $3 each.

The Trivia:
Spot prizes will be given throughout the night, with questions from quizmaster John Lovegrove.

The Raffle:
Kiwi’s and Aussies of Portland are organizing a pub raffle, with three great prizes. 2 Tickets are included with the VIP package, and additional tickets are available to anyone for $2 each or 3 for $5. The raffle is a partial fundraiser for the Kiwi/Aussie group.

First Prize: Meat Tray
A Meat Tray (in Australia) or Meat Plate (in New Zealand) is just what it sounds like – a selection of meat cuts, valued at $100.
Provided by The Big Legrowlski

Second Prize: Kiwi/Aussie gift bag
Unique gifts from down under, valued at $75
Provided by Kiwis and Aussies of Portland

Third Prize: The actual BBQ being used for the Sausage Sizzle
Not a joke.