“It is really awesome to finish our third orbit around the sun at Ecliptic,” said Brewmaster and Owner John Harris. “Thank you to everyone that has been part of us getting here.  In celebration, we created a Third Orbit Anniversary Ale and I can’t wait for everyone to try it.”

Details about the beer:
Third Orbit Anniversary Ale: Imperial Porter w/ Cherries
Ecliptic’s third orbit around the sun is on October 20th. To celebrate they brewed an Imperial Porter with a gravity warping amount of cherries. A blend of seven malts along with Columbus, Amarillo, Chinook, and Cascade hops complement the chocolatey cherry flavors.  ABV 9% IBU 50 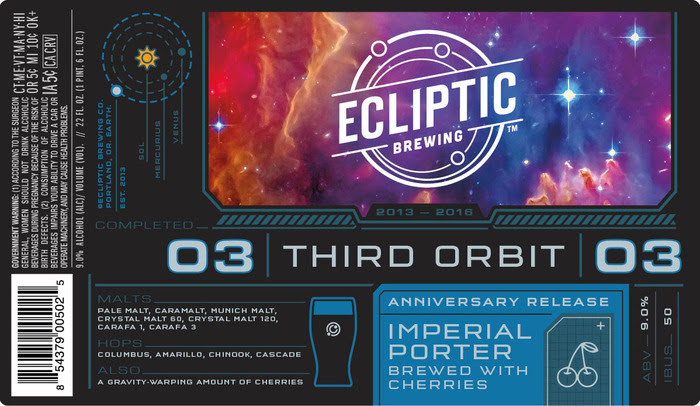 About the Rare Beer Tapping
During the Third Orbit celebration, Ecliptic will tap rare beers from their cellar on the hour from 11am to 5pm.  Below are some of the beers that will be tapped at the party.

About The Music
Free live music, benefiting The Jeremy Wilson Foundation, will also be included in the celebration.  Attendees will have the chance to donate to the foundation upon entry into the show.  All proceeds will go to the foundation.

The music will start at 5:30pm and will be open to all ages.  Fernando, a locally and nationally acclaimed artist will perform as the headliner for the event.

Below are details about the lineup:

And There is More