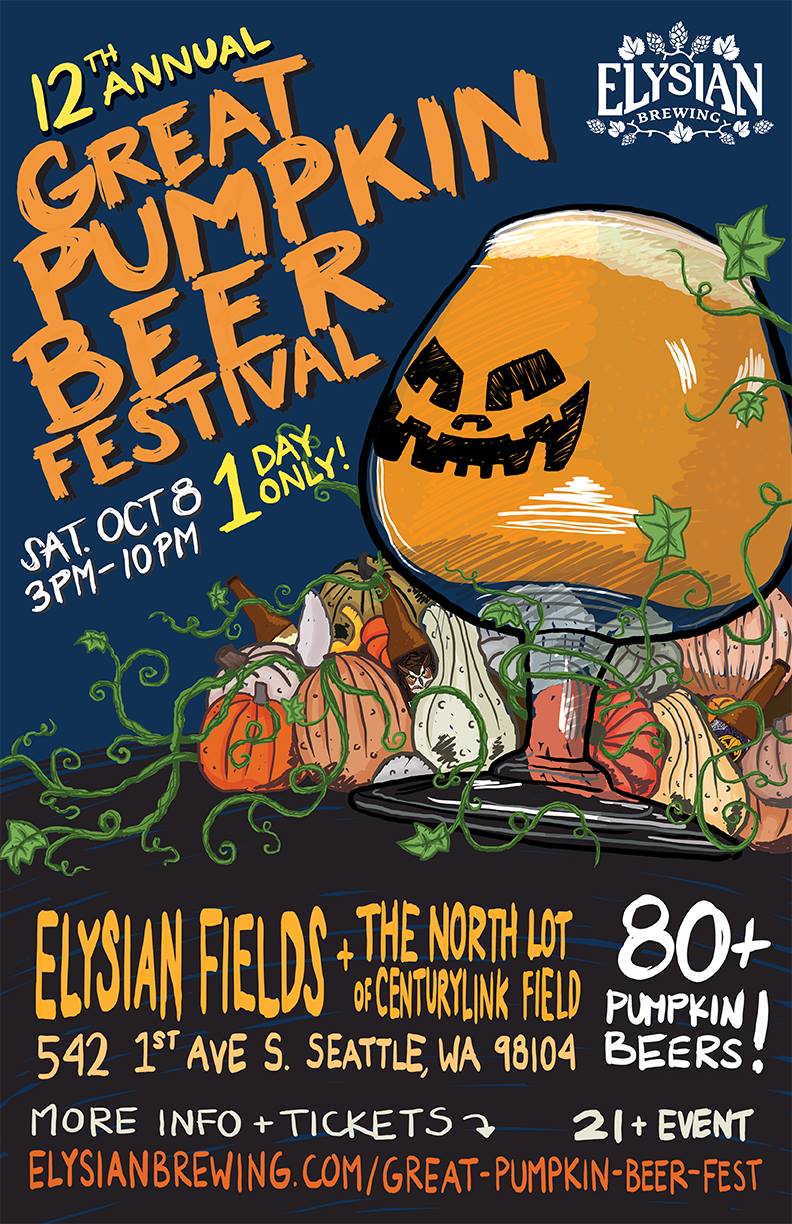 The Great Pumpkin Beer Festival (GPBF) From Elysian Brewing will return on Saturday, October 8, to a new location at Elysian Fields and across the street at the North Lot of CenturyLink Field. For the 12th year, the GPBF will be shortened to taking place for one day only from 3:00 to 10:00pm. Tickets to the GPBF event go on sale today, Monday, August 1.

Once again the Elysian team will tap a giant, several-hundred pound pumpkin that has been scooped, scorched, filled with pumpkin beer and then sealed and conditioned for all attendees to enjoy. The Great Pumpkin Weigh-Off will take place one week prior on October 1, at the Elysian Airport Way Brewery located at 5510 Airport Way S in Seattle’s Georgetown neighborhood. Come get a first hand look of this year’s gourd prior to it being filled with an Elysian Pumpkin beer. Free and open to all ages, the Great Pumpkin Weigh-Off will feature the biggest and best pumpkins grown from the local farmers, and the winning pumpkin will receive the honor of being tapped at GPBF.

During the GPBF, Elysian will be pouring over 80 pumpkin beers from its own line up and from other breweries from around the country. Guests are encouraged to embrace the color of the festival – orange – in any way they would like to represent. Pumpkin Fest judges will wade through the crowds to select the most festive to win a thirst-quenching prize.

Tickets are $28.00 per person and will be available for purchase for those 21+ at all four Elysian locations and online beginning today. Ticket price includes a Great Pumpkin Beer Festival snifter glass and 6 drink tickets. Additional drink tickets will be sold at the festival for $2 each. A designated driver ticket is available for $5 per person online only.

Here’s a rundown on the Elysian Beers that will be hitting store shelves and tap handles.

The Great Pumpkin
The Great Pumpkin was the silver medalist at the 2007 Great American Beer Festival in the Fruit and Vegetable category and was also the world’s first Imperial pumpkin ale. Brewed with Premium 2-Row, Munich, Cara-Hell, Cara-Vienne, Cara-Munich and Crisp 45° L Crystal malts. Roasted pumpkin seeds in the mash, and extra pumpkin added in the mash, kettle and fermenter. Spiced with cinnamon, nutmeg, cloves and allspice. 8.4% ABV
AVAILABLE :: AUG-OCT
Draft & 22oz Bottles