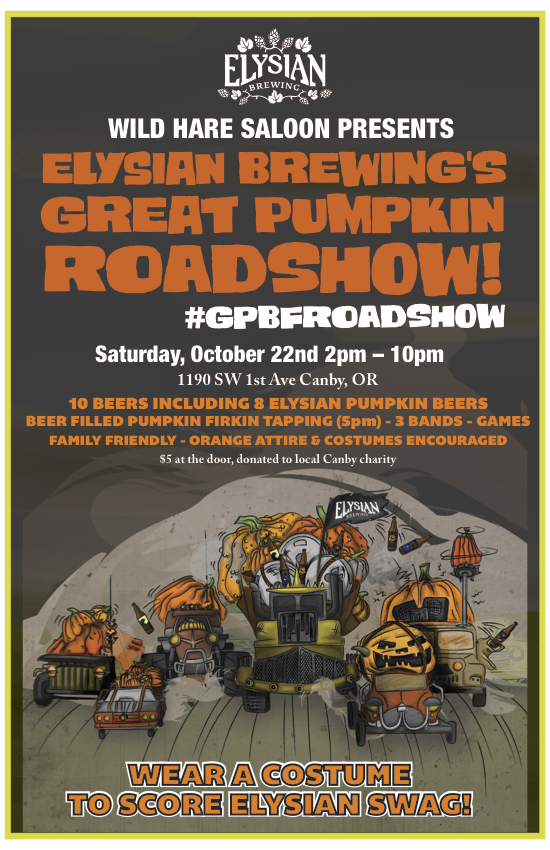 This event will feature three bands—CoolKids, Lance Kinnaird, and Capital Gains. In addition to tasting exclusive offerings from Elysian Brewing, there will be plenty of activities for all ages. Games like Cornhole and Life Size Jenga are sure to entertain the whole family, but there will also be a pumpkin painting contest, a costume contest, a pumpkin tapping and more.

Pumpkin flare and costumes are highly encouraged. Get creative! We will also have a free photo booth so you can commemorate the event.

Pumpkin beers are a seasonal favorite, and Elysian leads the market when it comes to their creative pumpkin offerings. Eight beers will be served at the Great Pumpkin Roadshow, four of which are exclusive to the roadshow event. They range in styles from Stouts to Imperials and Barleywines to Common Ales.

Exclusive to this event will be four limited release beers available only at the Roadshow event. Their names reflect the Halloween season, but their flavors are more of a treat than a trick. They are: The Gourdfather Pumpkin Barleywine, Ben’s Old Fashioned Pumpkin Ale, Steamy Hollow Pumpkin California Common and Blight Brown Pumpkin Ale.

This outdoor event is sure to ring in the Halloween season. The Wild Hare Saloon will be offering their full menu inside the restaurant, as well as hosting the food truck “Big Fat Weiners” outside in the tented beer garden.

The Booster Club of Canby will be assisting in the event and will receive all money raised at the door. The suggested donation is $5 per adult. Kids get in free.