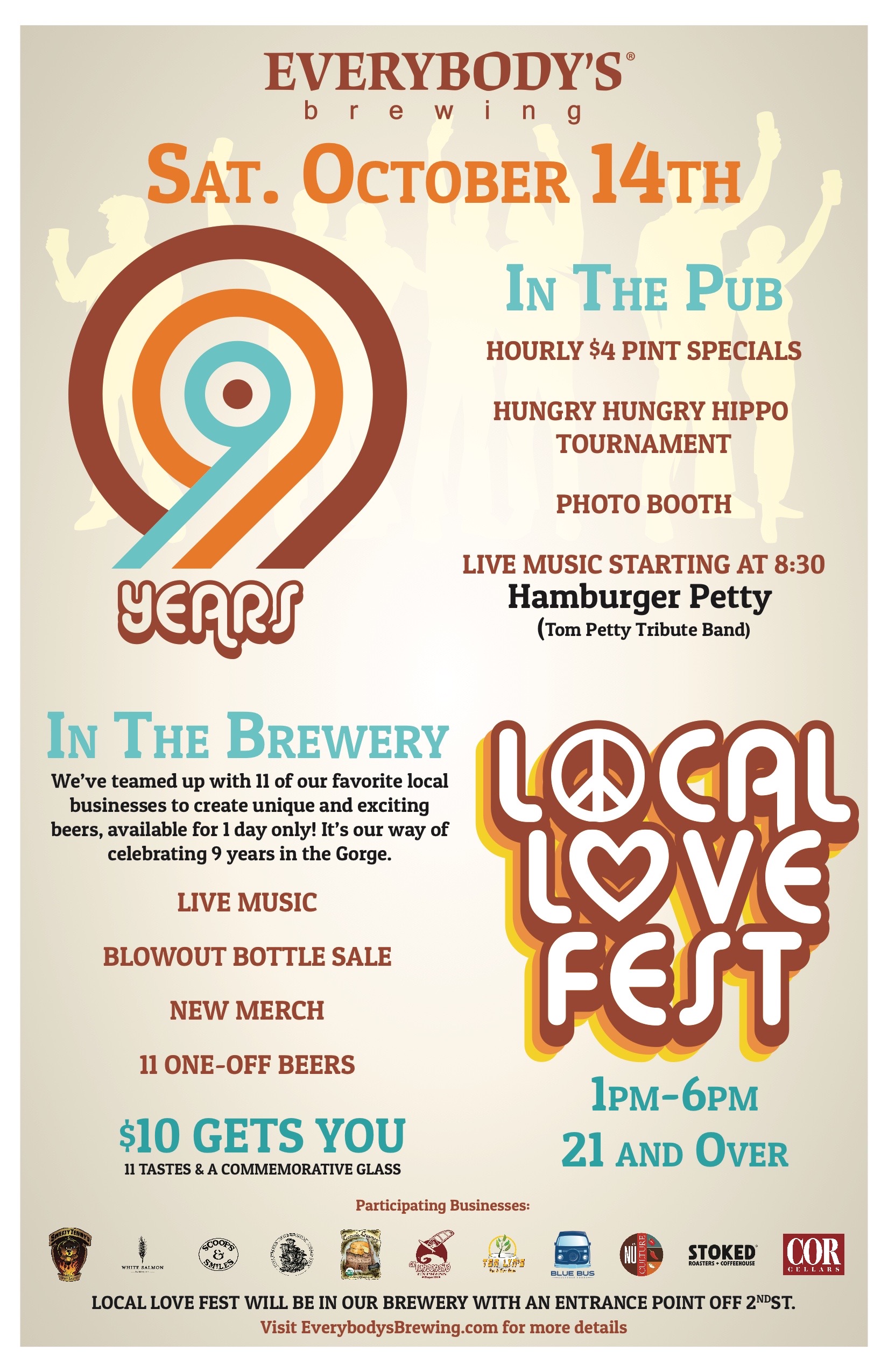 When Everybody’s Brewing celebrates its 9th anniversary in another week this one will be a bittersweet one. If everything goes as planned Everybody’s Brewing will be moving into a new building and taking over the former location of Trellis and Candy Spa just to the east of its current location in the spring 2018.

But before doing so Everybody’s Brewing will celebrate its 9th anniversary on Saturday, October 14th with its Local Love Fest at its brewpub in downtown White Salmon, Washington. Local Love Fest will take place from 1:00-6:00pm and will feature 11 collaboration beers all brewed or paired with ingredients or foods from fellow businesses located in the Columbia Gorge.

Local Love Fest will also include live music, beer specials, a photo booth, giveaways, bottle blowout deals, and Everybody’s Hungry Hungry Hippo Tournament. Then later in the evening Everybody’s will host Hamburger Petty, a Tom Petty tribute band beginning at 8:30pm. With this evening’s news that Petty has passed away this performance will honor the man that provided so many songs over the past 40 years.

Co-owner Christine Ellenberger said in a statement, “This year’s party is all about being thankful. Nine years is a great milestone for us, and we want to celebrate all the people that have helped us get here. That’s where the idea for the Local Love Fest came in.”

Entry into Local Love Fest is free, but for $10 you get a commemorative glass and 11 tasting tokens. Participating purveyors will be on hand to talk about their products and the beer they helped brew.

The lineup of collaborations will include:

The anniversary party will also give attendees a chance to check out the progress that Everybody’s has made on its new building to the east of its current location. Everybody’s plans to move its brewery and pub to the new space this coming Spring that will be located on the corner of East Jewett and SE 2nd Avenue.

Doug Ellenberger said in a statement, “We saw our dreams become a reality in this building, but we’ve outgrown the space. So many people helped make this our home. We hope to see a lot of folks here on the 14th. If you are from the Gorge, come celebrate with your neighbors, and if you are from out of town, come experience the local love of White Salmon.”