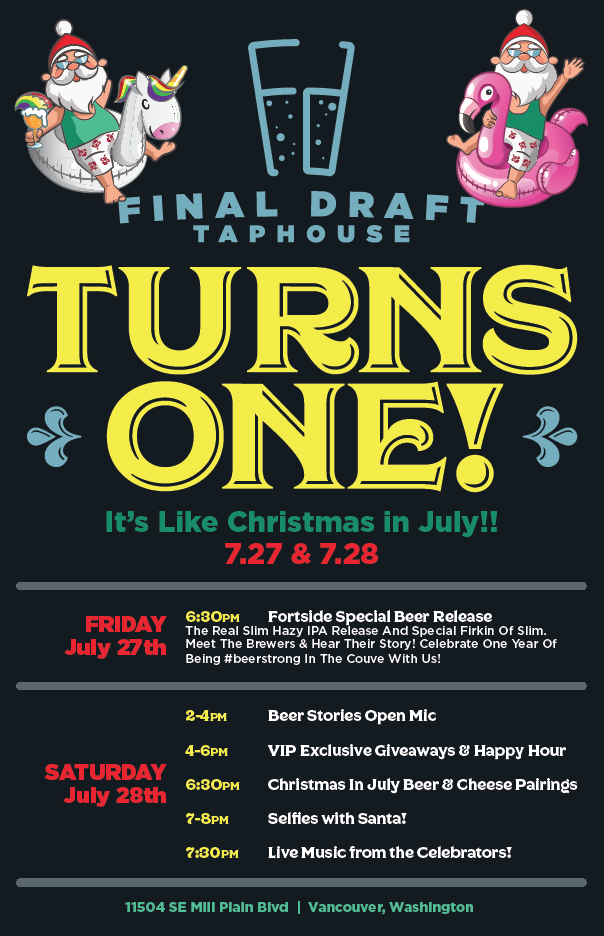 Located on the eastside of Vancouver just north of the Columbia River off Interstate 205 and SE Milll Plain is Final Draft Taphouse. From July 27-28, 2018, the beer bar will celebrate its One Year Anniversary with some fun, beery events including Christmas in July.

Final Draft Taphouse is the concept that was developed by co-owners Kimberly Johnson and Mike Bolt. Both were looking at a new avenue to continue their careers in the craft brewing industry and decided to open a beercentric bar. With 30 rotating beers, ciders and wine on tap (a list can be found here) there is always something on tap to please the most distinguished palate.

On Friday, July 27th it will be host to a new beer release from Fortside Brewing with its The Real Slim Hazy IPA. This new Hazy IPA will definitely make you stand up plus it’ll be poured alongside a firkin of the same beer. Sounds to us like an excellent way to sample both versions of the New England style IPA.

Then on Saturday, July 28th things kick fully into celebratory mode with a days worth of events. The day begins with Beer Stories Open Mic from 2:00-4:00pm followed by a special two hour Happy Hour beginning at 4:00pm with special VIP Giveaways.

Then at 6:30 is when Christmas In July fully kicks off with a special Christmas In July Beer & Cheese Pairings. At 7:00pm one can get a selfie with Santa prior to when The Celebrators provide live music at 7:30pm.

Congratulations on One Year!