Currently arriving at taprooms across the country is Firestone Walker Brewing Co.’s first major foray into nitrogen beers with its new draft only release of Nitro Merlin Milk Stout. After successfully serving Velvet Merlin as both a milk stout and a nitro stout, Firestone Walker Brewmaster Matt Matt Brynildson decided to bring the two creations together to make Nitro Merlin Milk Stout to what he describes as a “double cream stout”.

On Saturday, January 16, Roscoe’s will be hosting the Portland “Milk & Cookies” release for Nitro Merlin Milk Stout from 4:00 to 7:00pm. This new release will be paired with Brown Butter Cookie Co’s sinfully delicious cookies!

“We’ve experimented with Velvet Merlin as both a milk stout and as a nitro beer, but this is the first time we’ve married the two styles,” said Brewmaster Matt Brynildson. “The combination is really magical, to the point where you can’t imagine one without the other once you taste it.” 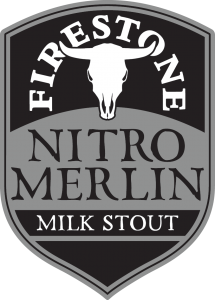 Milking It
Nitro Merlin Milk Stout is brewed exactly the same as Firestone Walker’s winter seasonal Velvet Merlin oatmeal stout, but with one critical twist: the inclusion of non-fermentable lactose sugar (a.k.a. milk sugar), the ingredient that transforms the beer into a milk stout.

“With a traditional dry stout like Velvet Merlin, you’re using these roasted barleys that add astringency, with a fairly high hopping rate that adds bitterness,” Brynildson said. “But when you add milk sugar into the mix, you counterbalance those more astringent qualities. It’s a lot like adding cream to your dark roasted coffee.”

He added, “The result is a stout that is still roasty, but with this mellow sweetness and a roundness of body that is only enhanced by the nitro format.”

More Velvety
Nitro beer was originally popularized as a way to mimic the classic British cask ale experience, which is known for delivering a thick creamy head and an ultra-smooth mouthfeel with less carbonation.

“The challenge with cask ale is that you’re dealing with a live fermentation, and a lot of things can go wrong,” Brynildson said. “Nitrogenating a stable beer is the solution for capturing a similar head and mouthfeel while bulletproofing the process.”

When a nitro beer is poured, it is pushed through a dedicated “sparkler” nozzle on the tap that sheers the liquid and knocks the nitrogen out of solution.

“You get this cascading waterfall effect in the glass and this temporary visual whiteout of the beer,” Brynildson said. “That’s the nitrogen coming out of solution, and then it migrates to the top to create this beautiful foam. The presentation is just fantastic. Nitro isn’t just about head retention and palate smoothness, it’s also about the theater of the pour.”

He added, “With Nitro Merlin Milk Stout, you’ve got this dark, roasty beer that looks really ominous, yet on nitro it’s so smooth and creamy and drinkable. It’s a visual mindf***, and a complete transformation on the palate—especially with the added dimension of the milk sugar.”

Milk & Cookies
The release of Nitro Merlin Milk Stout coincides with a series of “Milk & Cookies” promotions to be held in select markets, with the beer being served with cookies provided by Brown Butter Cookie Company. The company’s signature shortbread cookies are made with browned butter, brown sugar and vanilla with a touch of sea salt.

“Brown Butter Cookie Company is a hometown favorite created by two sisters here on the Central Coast,” Brynildson said. “This is a pairing of local flavors that taste really awesome together.”

Details on upcoming Milk & Cookies pairings will be forthcoming at FirestoneBeer.com.