Five fresh hop fests including Oregon’s biggest at Oak’s Park and Wayfinder Beer opens. All of the craft beer events for the week of September 29th.

Occidental Oktoberfest Party
5-8 p.m. Thursday September 29th, McMenamins 23rd Ave. Bottle Shop, 2290 NW Thurman St.;
This is about my favorite time of the year both for the weather and the beer, and Occidental is one of my favorite Oregon lager breweries so the news that they’re coming to the 23rd Avenue Bottle Shop tonight to pour tastes of their Alt and Bohemian Pilsner is good news indeed. Better yet, Occidental’s new draft-only Hoppy Pilsner and Oktoberfest will be on tap with Hefeweizen Here’s what they say about their beers:

Finnriver Cidery Bottle Tasting
5-8 p.m. Thurday Sept. 29, The BeerMongers, 1125 SE Division St.;
Jana and crew will be pouring tastes of some great ciders from one of the Northwest’s favorite producers tonight.

13th Annual Portland Fresh Hops Fest
5-9 p.m. Friday Sept. 30, Noon-8 p.m. Saturday Oct. 1, Oaks Amusement Park, 7805 SE Oaks Park Way; Free Admission. $20 for required tasting glass and eight tix; 21 and over to sample; one person per glass; cash only. Additional drink tix are four for $5.
No minors Friday. Minors permitted on Saturday until 5 p.m. (park rides open till 7 p.m.) Dogs on leashes OK as long as they behave.
The Oregon Brewers Guild, the non-profit organization whose mission is to promote the state’s craft brewing industry and the common interests of its more than 150 brewery members, organizes Oregon’s biggest celebration of fresh hop beers. This year, the fest features more than 60 Oregon brewed fresh hop beers; here’s the list of participants http://oregoncraftbeer.org/freshhopsfest/. Because of the festival’s and the style’s popularity, beers may run out; for the greatest selection, attend on Friday or before 3 p.m. on Saturday. Food will be available from Monk’s Deli and the Urban German Grill. Vendors include the Timbers Army No Pity Van, the Oregon Hop Growers Association, Illustrated Playing Cards and Bottle Tap.

Meet Smog City Brewing
5-8 p.m. Friday Sept. 30, The BeerMongers, 1125 SE Division St.;
“If you’re not familiar with Smog City, you should be,” says head Monger Sean Campbell, “It’s a little brewery from Torrance, CA making some delicious beer and we’re lucky enough to be pouring a few of them…”

Wayfinder Beer Grand Opening
Saturday October 1, Wayfinder Beer, 304 SE Second Ave.;
The eagerly awaited Wayfinder Beer is an 8,900 square-foot hybrid of a German-style beer hall and a Northwest brewery/restaurant with a 110-seat taproom, a big outdoor deck and a 10-barrel brewing facility designed for up to 7,500 barrels of beer production per year, with the emphasis on well-made lagers. Located at in Portland’s Central Eastside neighborhood, Wayfinder will serve lunch and dinner seven days a week – starting Saturday! is the big news. It’s the brainchild of Double Mountain co-founder Charlie Devereux, Sizzle Pie’s Matthew Jacobson and Rodney Muirhead of Podnah’s Pit.

The bar’s 16 taps will initially feature a mix of collaboration brews made with great local breweries (Baerlic, Breakside, Hopworks, 54° 40′, Widmer), along with some worthy guest beers. A 10-barrel brewing system will come online soon, with award-winning lager specialist Kevin Davey (Chuckanut, Firestone Walker, Gordon Biersch) at the helm. On the cocktail side, mixologist Jacob Grier runs the show, and you know that can’t be bad, as the Beatles once said. Rodney Muirhead has designed a beer-friendly menu of American cuisine in his signature style: inventive yet gimmick-free: sandwiches such as smoked prime rib with beer cheese or house-smoked pastrami; house-made sausages and pretzels; and a wide array of snacks dominate the all-day menu. 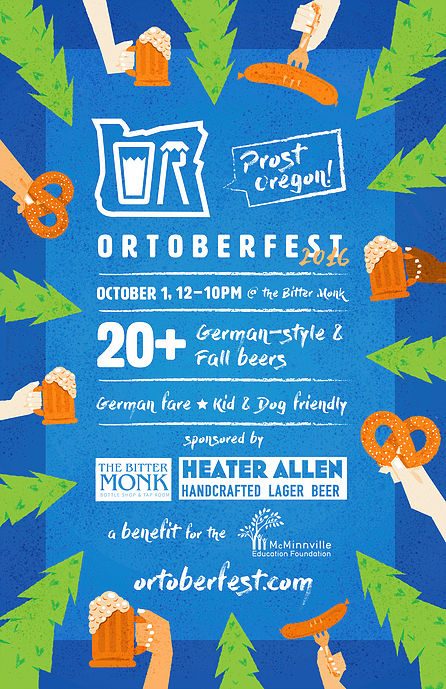 ORtoberfest
Noon – 10 p.m. Saturday Oct. 1, The Bitter Monk, $10 includes 4 tix and souvenir glass.
The second annual ORtoberfest in McMinnville is a small, fun festival that benefits the McMinnville Education Foundation and is hosted by those lovely lager brewers, Heater Allen, and The Bitter Monk. The focus is on German-style and fall seasonal beers, which means lots of fresh hop beers and includes beers – and cider – from 18 of the region’s finest.

First Springfield Fresh Hops Festival
Noon-9 p.m. Saturday Oct. 1, Sprout, 418 A St., Springfield; $10 includes festival glass and three tix; 21 & over only.
This new event celebrates the hop harvest with 24 Oregon craft breweries and cider-makers showcasing hops in specialty releases. Claim 52 Brewing and Plank Town Brewing Co. and the City of Springfield introduce the inaugural Springfield Fresh Hop Festival with live music sponsored by The Bier Stein. Also: great food from local food vendors and t-shirts screen-printed on-site. Musical guests include live DJ sets Tawrence and Against The Green, live music from RitchieG and MA Beat, Alder Street Allstars, and an acoustic set on the patio from Crooked River. The venue is located at the corner of 4th and A streets just two blocks from the bus station and Lane Transit District is offering free buss pass coupons to make it easy and safe for attendees to get to and from the festival.

Steinhaus Oktoberfest
3 p.m.- close, Saturday Oct. 1, Steinhauspdx, 2366 SE 82nd Ave.; Kids OK until 8 p.m.
It’s the season for Germanic music, beer and celebration and the Steinhaus crew is throwing an Oktoberfest style party with German and local festbiers on tap, fun and games such as the steinhoisting contest and a visit from the Paulaner women from 5-8 p.m. Lederhosen and Dirndls are encouraged.

Cribbage Night
5 p.m. Tuesdays, The BeerMongers, 1125 SE Division St.;
Bring your cribbage board and your thirst: Tuesdays are now cribbage nights at the Mongers and all levels of players from beginners to grandmasters are welcome.

Citra Showers Release Party
5-10 p.m. Tuesday Oct. 4, NW IPA, 6350 S.E. Foster Rd.;
The N-Dubs crew welcomes for the first time in Oregon, Noble Ale Works from Anaheim Calif. They’ll be pouring Citra Showers on draft and in bombers to go. Citra Showers is one of Noble Ale’s new Double IPA series that showcases their favorite hop varieties, one by one, with each consecutive release. This hop bursts with juicy layers of mango, lemongrass, and grapefruit and – better yet – is the first of many upcoming releases in this series of single hopped Double IPAs.