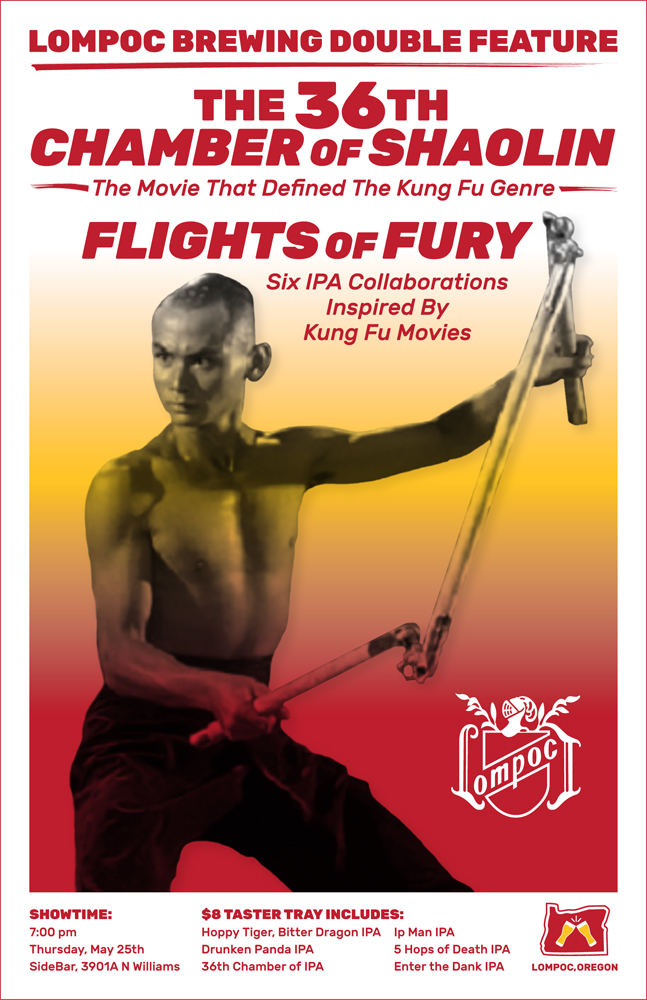 During the past few years Lompoc Brewing has created a number of series of themed IPAs. Past themes included spies, hip-hop, sci-fi, classic rock and baseball. Many of the beers in these various series have been involved collaborations with other within the beer industry.

On Thursday, May 25th Lompoc Sidebar will host the ultimate double feature on Kung Fu Themed IPAs and Kung Fu movies. The fun begins at 4:00pm with the beer tappings and is then followed at 7:00pm with the showing of The 36th Chamber of Shaolin. This film is said to have defined the Kung Fu genre. There are six Kung Fu themed IPAs that Lompoc will be offering in an $8.00 taster tray.

Drunken Panda IPA: This collaboration with EaT Oyster Bar is golden in color with a citrus and floral aroma. There is a spicy bitterness with hints of tangerine and a creamy mouthfeel.

Enter the Dank IPA: This IPA offers the ultimate challenge of ancient and deadly weapons…hops! Penetrate the secret chambers of an IPA that has no barriers. Full of pithy citrus rind, ripe fruits and a strong hop bitterness, the hazy red color and huge citrus nose will overtake your senses. Enter the dank if you dare, there is no escape!

5 Hops of Death IPA: Trained in secret, honed to perfection, the 5 Hops of Death have come to attack your taste buds with delicious hop flavor. Pacific Jade, Green Bullet, Sorachi Ace, Ultra and Galaxy hops are all fighting for dominance, as this beer packs a mighty punch!

Hoppy Tiger Bitter Dragon IPA: Green Destiny may be a sword in the movie, but in this beer hops are the Green Destiny! A collaboration with Swedish brewer Marie Kusa, this IPA packs a big tangerine and papaya nose with floral and tropical notes from Mosaic and Simcoe marrying each other. It has a light copper-color and the malt delivers mild caramel flavors.

Ip Man IPA: This collaboration with Ross Island Brewing was named in honor of Ip Man, one of the first instructors to publicly teach the Chinese martial art of Wing Chun Kung Fu. It’s light copper in color with a spicy, lingering bitterness and notes of apricot, red grapefruit and pine.

The 36th Chamber of IPA: After mastering all the known disciplines, the time for sharing the Truths of the Secret Arts is upon us! The 36th Chamber of IPA expands the consciousness of the masses – and the palate – as it teaches the resolve and inner strength necessary to fight against the oppression of boring beer! Thirty-six pounds of hops pounce upon the senses and strike a balance between peppery and citrusy, and between earthy and divine. Subtle caramel notes and five kinds of hops dwell within The 36th Chamber as they mysteriously work in unison to form a straw colored, spicy, savory and irresistibly refreshing tribute to the power of resistance.

Then three hours after the Kung Fu IPAs are tapped Lompoc will show The 36th Chamber of Shaolin, a 1978 Shaw Brothers kung fu film directed by Liu Chia-liang and starring Gordon Liu. The film follows a highly fictionalized version of San Te, a legendary Shaolin martial arts disciple who trained under the general Chi Shan, and is widely considered to be one of the greatest kung fu films of all time.