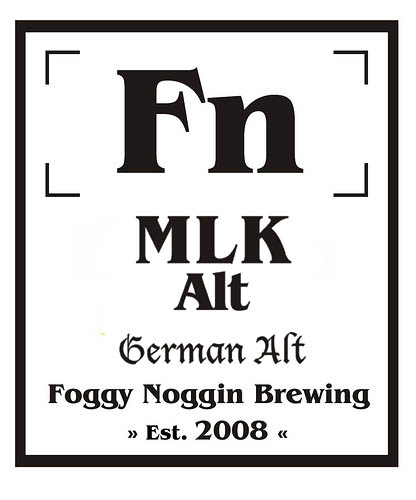 This past January on Martin Luther King Day, Jim Jamison at Foggy Noggin Brewing brewed up this year’s batch of MLK Alt. Now lagered for the past couple of months this limited seasonal beer is ready for its release on Saturday, April 4th from Noon to 5:00pm at Foggy Noggin’s tasting room in Bothell, WA.

MLK Alt – German Alt
Every beer has a dream and in respect of the great MLK, beer’s all over the world have gained equality.  English, German, Belguim and even American beers are now seen on tap next to each other.  MLK Alt is brewed as a traditional German Alt and fits in perfectly with the Foggy Noggin English beer line-up.  Brewed in the winter and lagered until the spring provides a crisp, sharp flavor profile and a nice hop backbone.
OG: 1.051
IBU: 55
SRM: 11
ABV: 4.2
Malts: German Pilsener, Vienna, Munich, CaraMunich
Hops: Magnum, Hallertau

This beer is in very limited and will have a very short run cycle.  Only brewed one day each year, MLK day in January. This beer is only available at the brewery tasting room, while this beer lasts. You will not want to miss out on this.