That would be Art Larrance and Ron Gansberg, who had the vision to open the Cascade Barrel House five years ago and who did a lot to put blended, barrel aged sour beers on the map. The anniversary continues through Saturday with a number of special beers on tap and at 6 p.m. on Friday evening, there’ll be a special anniversary toast and tapping of Cherry Bourbon Double Red – a replica of the very first LIVE barrel – with Cascade Brewing founder Art Larrance and Brewmaster Ron Gansberg.

Brewer Josh Huerta spent a lot of time perfecting a beer for his wife, who doesn’t like most beers. He came up with Pineapple Express, and I’ll let the proud author tell you about his beer:

Eight years ago when I started homebrewing my wife asked me to brew something she might liked. Since she does not likes beer at all. I asked her what style would that be and she said Pineapple beer. And that’s how Pineapple Express was born. Max Tieger helped me formulate the original recipe, a hefeweizen and that beer won the Widmer Collaborator Project in 2011.Widmer brewed 17 barrels of it to be poured at The Oregon Brewers Festival and the beer has since won me about 8 different medals in homebrew competitions. It’s my lucky hharm and friends can’t get enough of it. A couple of years ago I changed the base style to a German-style Kolsch. Here are the current specs:

German-Style Kolsch. 5.2 percent, 25 IBU. Brewed with Pilsner base malt a bit of white wheat and Vienna Malt and noble hops – Saaz and Perle. Caramelized pineapple added on secondary fermentation for about five days giving the beer a balanced pineapple flavor and aroma without the acidity. Thin body, crisp and very drinkable.

Beers Made By Walking
Noon-5 p.m. Saturday Oct. 10, at pubs listed below.

Taste the beers and cider inspired by the trails of Portland’s Forest Park. Thanks to a collaboration with the Forest Park Conservancy, monthly public hikes with brewers in Forest Park inspired them to brew beers incorporating ingredients such as licorice fern, dandelion, cedar, wild berries, Oregon grape, grand fir and more. The resulting beers will be tapped at four Southeast Portland bars and proceeds from the beer are donated to Forest Conservancy. Here’s the list of bars and their beers, cut-and-pasted – yes – from the press release, plus there’s an optional walking tour between pubs: 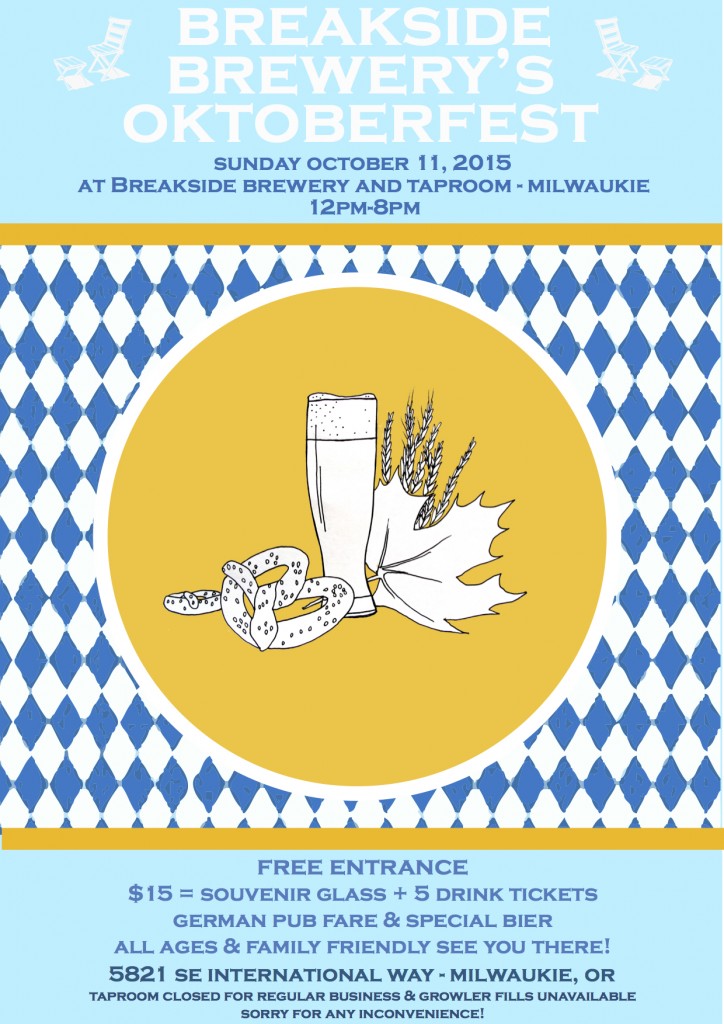 This all-ages event was a big hit with Breakside fans and the Milwaukie community last year, and again features special beers, German style food and music, authentic glassware, games and family-friendly activities all happening in a covered outdoor area.

The NW IPA crew will have three vintages of Baptist on tap – 2013, 2014(#34) and 2015(#53) – plus some special bottle pours of different batch numbers from the cellar. Flights will be available and bottles. And I’m reminded of my one of favorite jokes:

Q: You’re going fishing with a devout Baptist, so how do you keep him drinking all your beer?

A: Invite another Baptist along…