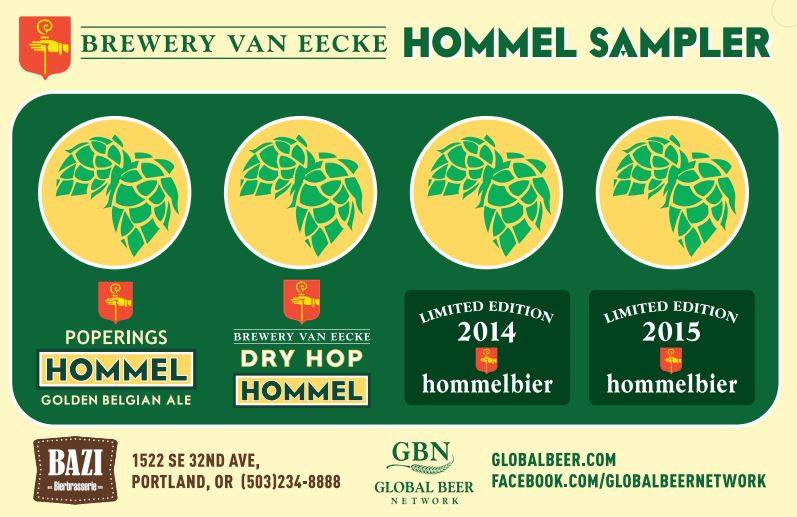 Brouwerij Van Eecke traces its origins back to 1629. The water comes from its own well under the brewery. The malts are bought in Northern France (the border is only 5 minutes away), and the hops are bought locally. The brewery uses only their own yeast-strains, cultivated in their laboratory.

Poperings Hommel Ale is the most famous and best selling beer of the brewery. It has been named “The 100 Best Beers in the World” by Men’s Journal Magazine and the “Top 25 Hop Beers in the World” by Thrillist 2014 (only Belgian beer listed). The Hommel ale is so unique that it has gained a large international customer base. Unlike American IPAs, Hommel bier highlights the elegant floral aromas of Hallertau and East Kent Goldings hops. Along with a few secret hops, this brew is rounded out with notes of citrus, honey and cumin seed. The re-fermentation in the bottle adds an extra dimension to the beer with a round mouth-feel, a full bodied and flowery aroma, with an alcohol strength of 7.5 %.

The Hommel Tasting Sampler will consist of the Hommel Golden Belgian Ale and Pop Hommel Dry Hopped on draft as well as bottles of the 2014 Fresh Hop and 2015 Fresh Hop. The tasting tray will be available for $12 and consist of 5 oz pours of each of the four beers. Bottles of the special edition 2014 and 2015 Fresh Hop will be available for purchase and Danny from the brewery will be on-site to sign them.