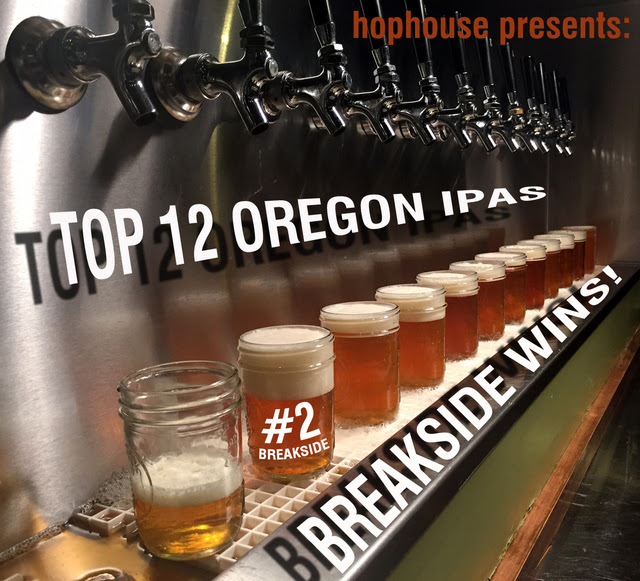 No, says Chris Tappan, who’s on the tasting panel and (ed. note: Tappan was asked to be on the panel but had to step out do to other unforeseen reasons) who told me that Breakside IPA was being excluded from the list because it’s brewed in Milwaukie, not Portland proper. Sounds like a scandal to me…of course, it’s germane to remember that just a year or two ago, Willamette Week declared IPAs a commercially dead style in Portland, so maybe this shouldn’t come as a shock…(and yes, this definitely qualifies as a tempest in a pint pot, but we all thrive on controversy, don’t we?) anyway, here’s the excellent press release from the Hophouse folks with news of the party.

Breakside IPA Party
Thursday Feb. 25, 15th Avenue Hophouse, 1517 NE Brazee St.;
They’ll be having a party with Breakside, probably an outdoor event, discounted beer and or free glasses, meet the brewers, plus a special bonus for the 425 people who voted for Breakside.

Breakside wins Top Oregon IPA 2016
Breakside IPA wins the 4th Annual Hophouse blind taste test. Out of 1445 ballots cast in January, Breakside was by far the top vote-getter at both individual Hophouses and of course overall with 425 votes. We are excited by this for a number of reasons:

1. This is the first time a Portland brewery has earned this honor. We love to “drink local” and this is as local as it gets.

2. Breakside Brewery is “new-ish” and not a huge brewery – although they are growing rapidly. They started with a 3.5 BBL system in 2010, added a 30 BBL system in the Milwaukie neighborhood in 2012, and are in the finishing stages of building a new brewery and taproom in NW Portland, due to open this coming summer. Some of the Breakside crew below:

3. In past years, we collected 700-900 votes per year, approximately. This year that number is 1445 total ballots. That is a lot of people as well as a lot of different types of people (both beer nerds and people doing it for fun). This year we definitely had the most brewers come in and take the test, as well as people from the media and representatives from many of the large distributors.

4. This is the most legitimate permutation of the IPA test we’ve done to date. The first couple of years we had two different versions in which you could choose to just pick your favorite IPA from a flight, but you could choose to actually know what you are picking. Because of that reason, there could have been a tendency to pick a cool new brewery instead of one of the older breweries, so it could have skewed the results somewhat. This year the results are based on a completely blind test.

5. Also this year, we were extremely diligent about the the “blind” factor. In order to maintain the secrecy, we did not allow patrons to order from any of the taps on the blind flight. They might have asked for a pint of Hop Lava, and promised to not look at the tap when the beer was being poured, but we didn’t do that. In fact, some people stomped out of the pubs because of this – they wanted an RPM and we wouldn’t pour it for them because the bartenders didn’t know which tap handle it was. We didn’t even change out the blind IPA kegs except for once at Hawthorne (after hours) and most employees did not know the line-up themselves. One person, our beer buyer Cait Kelley, graded all of the ballots and tabulated the data.

6. We expected Barley Brown to win again this year. We kept their Pallet Jack on, a great beer that won last year, all month as our “known” IPA. We actually sold almost 2000 pints of Pallet Jack this January because people love it and we needed to have an IPA on at all time, plus it won last year. This year it came in second with 228 votes. We thought this beer might have an unfair advantage because our regulars have been drinking this for a year now. However, in the end, it didn’t make a difference. All the other beers got 50-120 votes. So in the end it is a clear win.

7. Ben Edmunds, one of the brewers at Breakside, came in and took the blind taste test early in the month and scored a whopping 8 right, out of all 1445 ballots. The fact that Ben was able to do this means, if nothing else, he has an amazing palate. So he must know what he’s doing. Arguably some or many of these entrants had an element of luck, but we don’t think luck was involved with this.

More about the contest:
Average score was 2.29 out of 12.
We got only 21 ballots that scored 8, 9, 10 or 12 correct.
Of the people who don’t mind social media, these are the names of people finishing with 8 or more correct:
D Butters, D Johnson, J Fitzechbon, R Marchant, B Edmunds, B McGirk (12), M Reiersgaard (12), B Bretz, B Thomas, K Setzer, M Mcbee (12). We will be contacting you directly within a day or two to collect your prizes. These people are winning gift cards, Tshirts, and/or Mug Club memberships.
There were around 250 ballots with illegible names and/or emails, and a couple of people who got a perfect score (12) but didn’t give enough contact info for us to identify them (arrgh!).