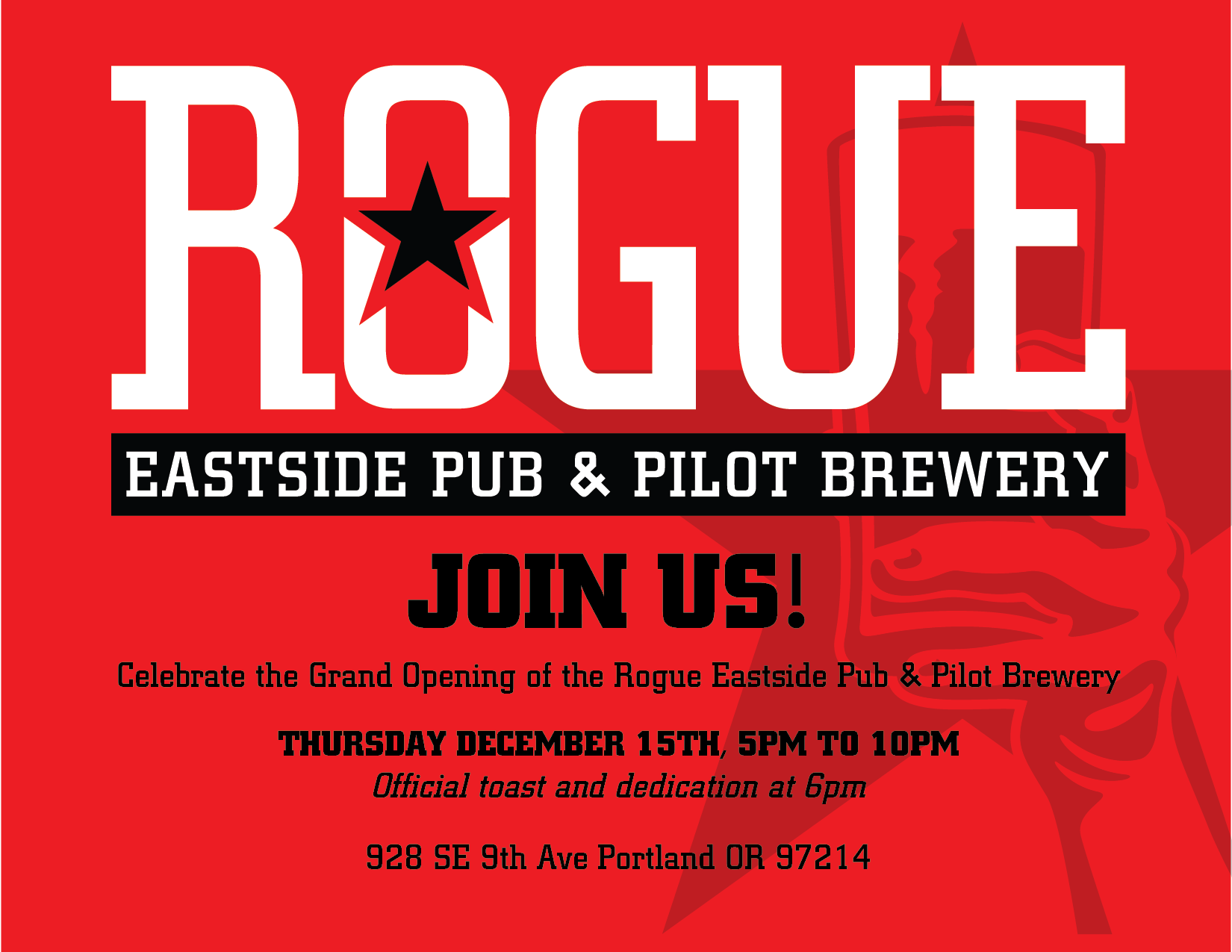 A little over eight years ago Rogue Ales took over the Green Dragon Bistro & Pub after its original ownership ran into financing issues necessary to bring the building up to city code. At that time Rogue stated that they had no intentions on changing anything at the Dragon and most notably keep its 19 taps dedicated to independent breweries. Through the resulting years under Rogue’s ownership, Green Dragon expanded to offering over 50 beers on tap, very few being brewed by Rogue and built the Buckman Botanical Brewery that the founders of the Green Dragon dreamed about.

On Thursday, December 15th, the Green Dragon will be no more and will change to the newly named and remodeled Rogue Eastside Pub & Pilot Brewery. The naming and interior remodel that is currently taking place is the first phase of the renovation, as weather permits Rogue will remove the old Quonset hut and fully remodel and expand its outdoor beer garden area. Steelhead Architecture completed the design work whose resume includes Deschutes Brewery – Portland, Gigantic Brewing, Baerlic Brewing and more.

Once this remodel and re-branding is completed some things will change, as other things will stay the same. Yes, there will an increased amount of Rogue beers on tap with a total of 35, but there will also be 19 taps dedicated to independent breweries. Pub Manager Russ Menegat will still be in charge as will its current staff. The food menu will change to one that is more closely associated to a Rogue Pub. This is something I feel is a positive move.

The Green Dragon Brew Crew will continue on just as it has since 2009. This group of excellent home brewers has been releasing a new beer every Wednesday and will continue the streak at the new Rogue Eastside Pub and Pilot Brewery. Best of all, the great events that the Green Dragon has hosted in the past will continue on at the newly re-branded pub. This includes BREWPUBLIC’s Killer Pumpkin Fest, Firkin Fest, The Wedge, and its regular Meet the Brewer nights.

We recently spoke to Rogue Ales President, Brett Joyce, to learn more about what to expect on the new Rogue Eastside Pub & Pilot Brewery. Here’s what we learned.

So what made you decide to change the Green Dragon to the newly names and remodeled Rogue Eastside Pub & Pilot Brewery?

Brett Joyce: It happened slowly over the past 8 years. More than anything I think we are so excited and anxious to share with more people all of the things that we’re doing at Rogue. And we look across the street here from the offices of Rogue at the Green Dragon and say why can’t we share what we have at Rogue. I think it’s more about us wanting to share more of Rogue experience with our fans and with the world more than anything else. The Green Dragon has been a really rewarding and fun experience for us but I think we’re really focused on Rogue. Trying to do multiple brands is really easier said than done, especially for a small company like us. It’s really mostly born from a positive place where we want to share Rogue with the world and when the Green Dragon changes over will be a vehicle for us to do it in a fun and compelling way.

Once the remodel is complete, what should patrons expect at the new Rogue Eastside Pub & Pilot Brewery?

BJ: If you can imagine the back taps, the ones we built out a number of years ago, we will be taking those taps and moving them. We will have the same number of taps but we are going to move those up front to the where the original 19 Green Dragon taps are, basically underneath where the TV was. So we are building out a tap wall right now. This will be where all of the taps will be located. So instead of trying to manage the dueling bars it’ll be easier to manage. The staff is going to love it!

So that’s one. We are going to open up, by knocking the wall down, that goes between the bistro and the main bar. So that’s going to open up the bistro area into the restaurant area. We’re taking all of the merchandise and are going to set that up right where the alcove is to look into the brewery. It’ll free up the rack space so we can put more tables and chairs in the main restaurant.

We’re going to put in some booths where the back bar is right now. The lighting is going to be different. We have new fixtures that will brighten the place up a little bit. We are going to paint both inside and outside. You’ll see some big wall paintings with Rogue graphics. It’s a total cosmetic update to the interior certainly.

With these changes the number of taps for non-Rogue produced beers is said to revert back to the original 19 taps that the original Green Dragon had. This is many more guest beers than any other Rogue location offers. Why did you decide to keep the offering so large here and only with independent breweries?

BJ: Its fun for us to do that. We are not trying to scrub the Green Dragon from the annals of history. We are proud of what we have been able to do there. It’s a really fun way to connect the history of the Green Dragon to the modern change of the new Rogue Eastside Pub & Pilot Brewery. So it’s a nice way to connect the past to the present. Its also a nice way for us to honor some of the great beers that are out there. Some customers want something more than what we may have on tap on that particular day. It’s also an acknowledgement that consumers are looking for a variety and the Green Dragon has always had that.

How are you going to determine which breweries are considered independent and which ones are not? Or what is your threshold?

BJ: We don’t have a hardcore Brewer’s Association definition but certainly there are people who have transacted with strategic partners and/or financial partners. They’re playing a different ballgame now. So for us independent means is that you’re run by an independent group, probably by the founders.

We partner with Rogue each October for our Killer Pumpkin Fest. From reading in between the lines, will this new decision of only pouring beers from independent breweries keep Elysian Brewing from being part of the event? Over the years Elysian has done a lot for the event.

BJ: As you know we just wrapped up another very successful Killer Pumpkin Fest. We will address this in 6 months or so when we need to think about this festival again.

Regarding the 15-barrel brewhouse changing from the Buckman Botanical Brewery to the Rogue Pilot Brewery, will any of the current beers come along with the name change?

BJ: Danny Connors will continue to lead the brewery; he’s a great guy. It’s a total change in direction. We had a lot of fun doing the no hop, low hop Buckman beers. And that was part of our journey at the Green Dragon. Now with the focus and emphasis on Rogue, we have lots of creativity that Danny can do in the brewery. This doesn’t limit him to less exotic type stuff but opens up the portfolio of what he can create back there. We are not saying that it can’t be low hop; we are just saying that it opens up more possibilities in product development. He is going to work closely with John Maier, our Brewmaster from down in Newport of 27 years. We want to bring some fun projects to the new Rogue Eastside Pub & Brewery. So I think for Danny it really is going to be fun opportunity for him and fun for the people who get to try what he’s brewing back there.

Do you feel that brewing beers that are more commercially appealing will turn the beers more quickly?

BJ: I honestly don’t think about it that way. We are just trying to do things that are interesting. So as long as we are doing things that are consistent with our brand, that’s interesting for us, that’s fun for us, we are happy to share those beers with our customers. We have the benefit of having 8 or 9 other pubs that we can pour these beers through. If Danny makes 30 kegs of a beer we don’t have to go through just one location as we have multiple pubs to help share those beers across our network.

That should make it exciting for the other pub locations to offer even more variety when it comes to Rogue beers.

BJ: We are kind of doubling down when it comes to that. Just the other month John got a new 5-barrel brewhouse in Newport. So he’s over there on his new toy. In terms of being able to bring more one-off creativity and variety to our pubs, between Danny and John we are going to have lots of that. We are really excited about this opportunity!

How often will John come up to brew with Danny?

BJ: Probably just whenever John wants to. With John it’s that when he thinks he can help or when he wants to help he will come up. I think the assistance that John gives to our satellite brewers is on recipe advice. They will talk about recipes as they build them. With John’s experience it allows him to really envision how combinations of hops and barley, and the amounts used of both ingredients are going to affect the beer. This is where a lot of his guidance comes in. He can do that without having to brew on site with him.

BJ: We have the FAQs and that. Its just like we did back in 2008 when we took over the Green Dragon. We are trying to be uber transparent in what we are doing and we are sharing that with the world. If others have questions we are happy to field those and give them an honest answer. All we ask is that people come on by when its been transformed and check it out. That’s really the approach. It’s a positive for us and our staff is really excited.

One thing we did not talk about is the patio. Come spring the patio is going to be transformed. The patio is great for its raw size thought it’s pretty rough as it is. So we are going to spend some money on it. As much as we love the Quonset Hut for its funky and historical value, its more or less hard to inhabit and takes up a lot of space. By taking that out and spending some money on grading the land and on design and seating features and fire pits, we will have a very nice patio. It’s a really important Phase 2 to the rebranding.

To read more about what changes are taking place please read the Green Dragon FAQ page by clicking here.