Help us celebrate the historic and symbiotic relationship between farmers and craft beer at Imperial Bottleshop and Taproom with the new Killer Farm-To-Glass Fest tonight, Wednesday, October 21 from 5:00pm – 9:00pm. This not-to-be-missed fundraiser for the National Brain Tumor Society (an important charity to help folks like Brewpublic co-founder Angelo De Ieso who live with brain cancer). The entire List for this event will feature beers and ciders sourced directly from local farms, or even cultivated by the brewers themselves.

There will be no charge for admission. Drink tickets will be $1.50 per 4 oz pour, or you can purchase 10 tickets for $13. Some particularly pricey beers will cost 2 tickets per 4 oz pour. A portion of proceeds will be donated to the National Brain Tumor Society on behalf of BREWPUBLIC.

Tonight’s killer taplist is as follows:

Fort George Brewery
Squash Buckler Pumpkin Ale: Squash Buckler begins with the gathering of the fresh crop of sugar pumpkins by Organically Grown Company and their community of local farms, sometime around early September. Whole pumpkins are then sliced and diced, roasted in the Fort George wood-fired oven to caramelize the sugars, and then placed in the boil of this autumn seasonal. There are no additional flavorings or spices. Squash Buckler simply packs rich organic malts and fire-roasted pumpkin into a deep amber ale.

Art + Science
West Valley Cider: dry and tart, appealing to connoisseurs of cider and newbies alike, and made from apples and quince foraged from friends, neighbors and strangers in the countryside of Sheridan, Willamina, Amity, Rickreal and Perrydale, commonly referred to the West Valley. 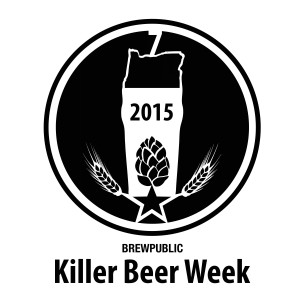