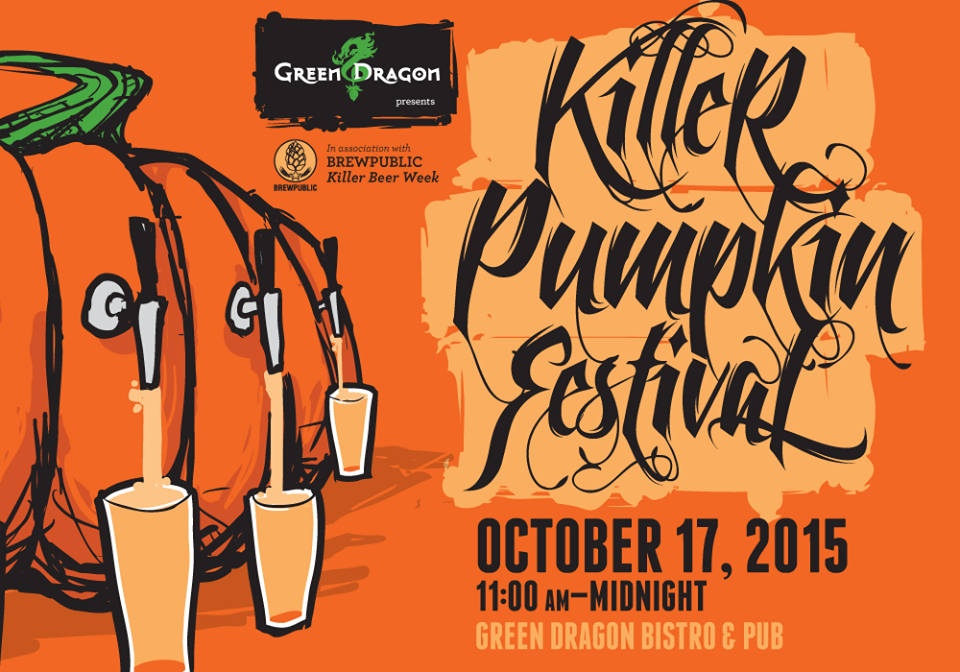 What can we say? If you like pumpkin craft beer, you’re going to once again LOVE this event hosted by the Green Dragon pub. All things pumpkin, including pumpkin foodie treats, the beloved pumpkin smashing festivities, and more pumpkin beers than you can shake a stick at (well over 40 locked in so far!). Oregon’s largest pumpkin beer fest, Killer Pumpkin Festival presented by Brewpublic returns on Saturday, October 17 beginning at 11:00am as part of Killer Beer Week.

The Dragon has a permit to close SE 9th Ave down to traffic in order to make room for surplus family pumpkin fun. This will again be Portland’s biggest pumpkin party. And make sure to be there when Elysian Brewing brings its Pumpkin Roadshow and its enormous pumpkin to be tapped that is full of one of nine Elysian’s pumpkin beers. Don’t miss it!

Throughout the day expect some set events outside in front of Green Dragon. Here are the scheduled events and the corresponding times.

The wicked stepbrother of Sleigh’r hits the town this fall. A burly 300 pounds of organic pumpkin and an ample helping of dark brown sugar were added to each batch, creating a sweet aroma, smooth mouthfeel and a warm finish plus all the toasted malt complexity Sleigh’r is known for. The legend of Sleigh’r lives on! 9% ABV

Our pumpkin ale has a strong malt backbone giving it a malt flavor much like pie crust. We add generous amounts of pumpkin and a restrained amount of spices giving it that wonderful pumpkin pie aroma. The result is a smooth and silky amber strong ale with a warm, spicy nose and rich, malty body. Relax, and let Laurelwood pumpkin ale set you aglow like a jack o’lantern! 7.5%

This semi-sweet cider is copper in color and perfect for fall. Fermented with cinnamon, nutmeg, allspice, and cloves, it offers hints of the season’s favorite spices followed by just a touch of pumpkin. 6.9%

A smoked pumpkin Cider made in Washington State. 6.5%

A seasonal cider made with roasted pumpkins, cinnamon, allspice, fresh ginger and nutmeg. 5%

Malt and hops accented with roasted pumpkin and spices of the season. A subtle hint of vanilla and honey. Punk’n is a wonderful compliment to foods with nutmeg, cinnamon, and clove flavors. Try it with roasted turkey, squash or pumpkin ravioli, peach cobbler, or pumpkin cheesecake. 5%

With a brilliant, deep copper hue and creamy beige-colored head, our Fall Hornin’ Pumpkin Ale has inviting aromas of caramelized malt and baking bread with highlights of cinnamon, nutmeg, pumpkin and seasonal spices. The pleasantly creamy mouthfeel and silky body embrace the sweet caramel flavors and tang of spices (with just hint of hops) that ends in a smooth, round finish. 6%

Aged for 6 months in Wild Turkey® barrels, this bourbon barrel-aged pumpkin ale is pleasantly creamy with a silky body and sweet caramel flavor. The aging process imparts notes of coconut, vanilla, and oak to compliment the tang of the spices and a hint of hops, all wrapped in a smooth, round finish. 8.5%

Pumpkin Sour is our ode to autumn. We brewed a sumptuous spiced brown ale and aged it for months in wine and Woodford Reserve Bourbon barrels with hand-roasted California heirloom pumpkins. The result is a tart and complex celebration of the harvest season, and the perfect mate for savory Thanksgiving staples and bourbon pecan pie. 8.5%

A full-bodied brown ale with smooth hints of pumpkin and brown sugar. We brew our Punkin Ale with pumpkin meat, brown sugar and spices. As the season cools, this is the perfect beer to warm up with. 7%

Pumpkin Lambicus is spontaneously fermented by wild yeast and bacteria native to the Senne Valley in Belgium, particularly Brettanomyces Bruxellensis and Brettanomyces Lambicus. It is hopped with Aged dry hops (which offer little presence but still provide antiseptic qualities), matured in Portuguese Sherry barrels, and back-sweetened after maturation. 4%

The award winning brewer, Hans Mehuys, has created a beautifully rich ale – using Kasteel Triple as the base. Color is that of pumpkin – a lovely orange glow. The beer comes in at a warming 8.5% and is spiced with cinnamon, nutmeg and cloves. 8.5%

The caramel and toffee maltiness of our Piper Down Scottish ale is the perfect backdrop for a boatload of roasted pumpkin. Just before bottling, we add a subtle amount of spice to complement, but not overwhelm, the earthy flavor. 5.8%

What’s that bite of tartness doing in a pumpkin beer? Adding the unexpected kick of cranberry juice to brighten this traditionally spiced seasonal ale. Pumpkick is brewed with plenty of pumpkin juice, cinnamon, nutmeg, and allspice, but it’s the cranberries and touch of lemongrass that send your taste buds sailing. 6%

This beer explodes with aromas of sweet Spices giving way to chocolate and roasted malt.  Flavors are reminiscent of fresh-cut pumpkin and chocolate and complimented by hints of clove, fresh Madagascar vanilla beans, nutmeg and allspice.

Brewed with brown sugar, honey, cinnamon, nutmeg, allspice and a heaping helping of would be jack-o-lanterns, Punk’In Drublic delivers autumn’s trademark flavors along with a hint of West Coast character, whether enjoyed in a pumpkin patch or on the beach. 8%

There are no additional flavorings or spices. Squash Buckler simply packs rich organic malts and fire-roasted pumpkin into a deep amber ale. 6.5%

A Belgian-style Tripel brewed with pumpkin, galangal and terragon. 8.2%

A Baltic-style Porter brewed with pumpkin, caraway and cinnamon. 8.2%

Our entry in the very popular pumpkin ale market is an eccentric one, with pumpkin flavor scarcely present, upstaged by cinnamon, allspice, nutmeg and ginger. A pleasant tartness prevails, with barrel aging providing a mellow roundness, and Brettanomyces putting the “unk” in Funky. 5.8%

Following in the footsteps of the highly regarded Alaskan Pumpkin Porter, this Pumpkin Ale has the holiday spices of nutmeg, cinnamon, clove and brown sugar plus a pinch of Alaskan’s famous alder-smoked malt, with a base of a lighter brown ale featuring Vienna malt and Goldings hops. 6%

This rich and luscious brew indulges in flavor with over 28 lbs. of pumpkin per barrel, for a full-bodied sweetness and deep russet color.  Classic pumpkin pie spices like cinnamon, nutmeg, and allspice ignite a warmth and spark that’s deepened by an undercurrent of roasty smoked malts. 8.5%

Made with Rogue Farms hops, barley and pumpkins. Hand crafted from Patch to Batch. 6.1%

Rogue Pumpkin Patch Ale with extra pumpkins and spices added. Served out of a cask.

with added spices to create this brew, we crafted a batch of pumpkin ale, froze it and removed ice to increase the flavor profile. We then aged the beer in freshly emptied Rogue Chipotle Whiskey barrels with additional vanilla, cardamom, and nutmeg spices. 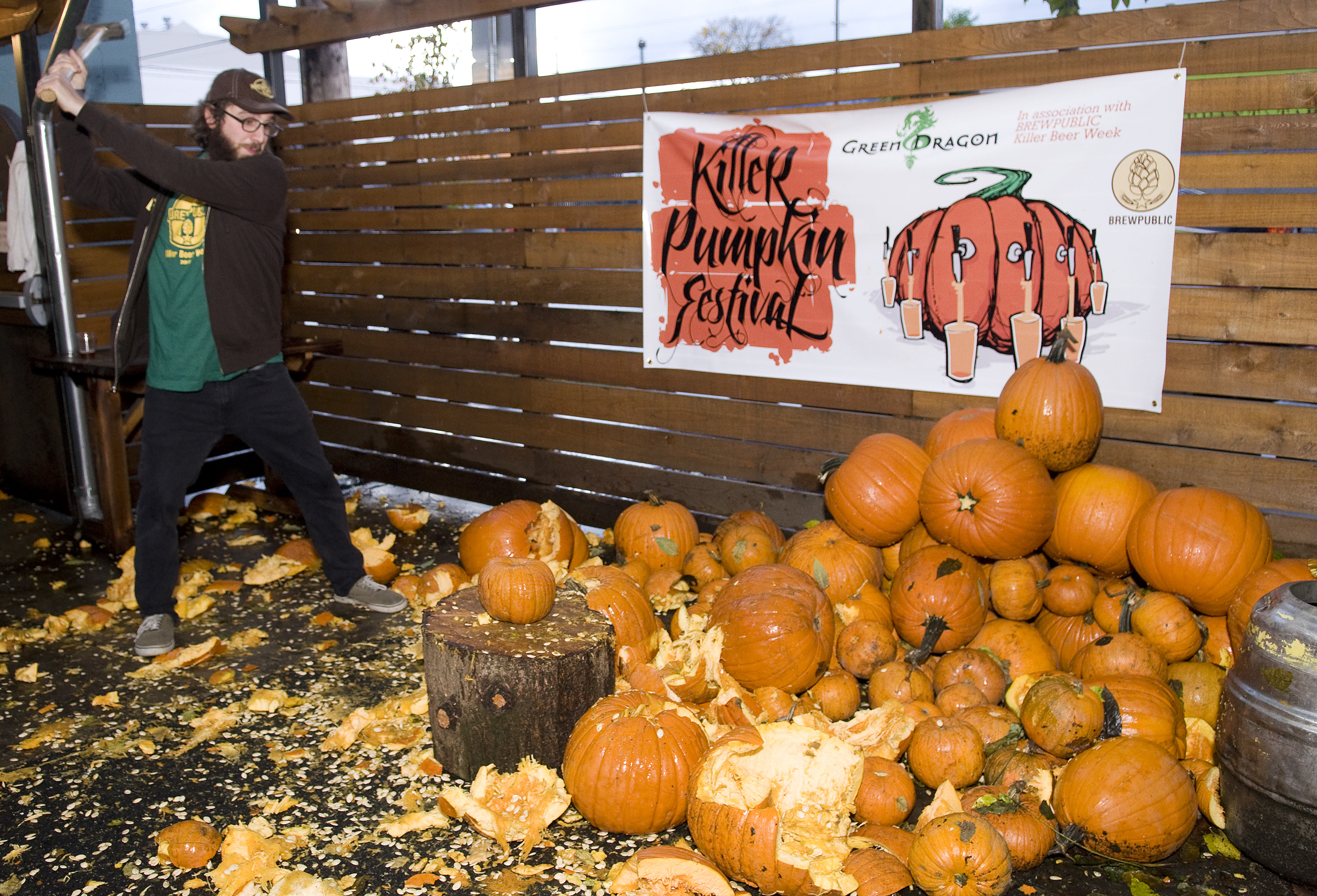 This beer features an American porter base brewed using two entire pumpkin pies from The Bakeshop in Portland as ingredients in a 1bbl batch. The resulting beer strikes the perfect balance between the malty profile of a classic porter and the signature aroma and flavors of pumpkin pie spice. Bring Me Pie has layers of subtle complexity and delicious, savory notes of cinnamon, nutmeg, and allspice that become more pronounced as the beer warms. 7.1%

Fresh Hop Pumpkin Kettle Sour, brewed with only European Maltz, We juice and roast pumpkin in house, Kettle sour with acidulated malt, During the 5 day kettle sour we steep locally roasted coffee that has been roasted only for us, we finish this beer with hand picked Nugget hops from a local grower. 5.4%

The Pumpkin Pedaler rides into Portland with warming aromas of clove, cinnamon, and nutmeg. Perfectly balanced flavors of pumpkin and spice with hints of maple sweetness lend way to a creamy mouth feel. 7.3%

Subtlety spiced yet massively squashed, Jackalope Imperial Pumpkin Porter is brewed with 250 pounds of squash/pumpkin per batch. A rich, smooth dark beer with a subtle hint of pumpkin, clove, nutmeg, cinnamon, and ginger. 7.5%

The boys from Ashtown Brewing, Everybody’s Brewing and Backwoods got together for a pub-exclusive collaboration. Fall On Your Face is a 5.2% ale made with darker seasonal malts, fall spices and just a hint of pumpkin. 5.2%

Our original pumpkin ale. Night Owl is brewed with over 7 lbs. of pumpkin per barrel and includes seven different malt varieties, green and roasted pumpkin seeds, and pumpkin in the mash, boil and fermenter. Bittered with Magnum hops and spiced in conditioning with nutmeg, clove, cinnamon, ginger and allspice. 6.7% ABV.

The Great Pumpkin was the silver medalist at the 2007 Great American Beer Festival in the Fruit and Vegetable category and was also the world’s first Imperial pumpkin ale. Brewedwith Pale, Munich, Cara-Hell, Cara-Vienne, Cara-Munich and Crisp 45° L Crystal malts. Roasted pumpkin seeds in the mash, and extra pumpkin added in the mash, kettle and fermenter. Spiced with cinnamon, nutmeg, cloves and allspice. 8% ABV

A perennial favorite and 2010 Silver medalist in the Great American Beer Festival Field Beer category, Dark o’ the Moon is spookily smooth and chocolatey. Brewed with Great Western pale, Crisp 77° Crystal, Munich, Cara-Vienne, roasted, chocolate and Special B malts with roasted pumpkin seeds in the mash.  Pumpkin in the mash, kettle and fermenter. Bittered with Magnum and finished with Saaz and crushed cinnamon. 6.5% ABV

A pumpkin ale with the attitude of a world-weary barista, Punkuccino packs a short shot of Stumptown coffee toddy in your pint with just a shake of cinnamon and nutmeg.  Pale, brown, biscuit, C-77 crystal, chocolate and kiln-coffee malts provide the body, German Northern Brewer lends a touch of bitterness, and lactose sweetens just a touch. Three pumpkin additions, in the mash, kettle and fermenter. 15°P/1.060 starting gravity; 5% ABV, 22 IBU

The Gourdfather is a pumpkin barleywine you can’t refuse, mellowing with age but still reminding you who’s boss.  A veritable pushcart of a malt bill brings pale, Munich, Cara-hell, Cara-vienne, C-15 crystal and pumpkin seeds up against a rival neighborhood armed with Magnum hops.  At 23.4 Plato starting gravity and 11.2% alcohol it’ll keep your friends close and your enemies closer.

The crispness of our house lager yeast and the subtle spiciness of Czech Saaz hops makes this a very drinkable beer–you’ll want more than just a sample. Brewed with organic pale, Weyermann Munich and Cara-Hell malts, with pumpkin added in the mash, kettle and fermenter. Spiced with fresh ginger and hopped with lots of Czech Saaz hops (otherwise it wouldn’t be traditional). 4.5% ABV

Evidently we brewed this one “the hard way”, so feel free to “fuss about it”.  Gourdgia on my Mind was brewed with pale, Munich, chocolate, brown and Thomas Fawcett amber malts. Pumpkin was added to the mash, Magnum hops, more pumpkin and a touch of cinnamon to the hot side, and pumpkin and peach puree and both dark and light Karo syrup to the fermenter. OG 15.5°P, 6.4% abv 24 IBU

Imagine if pumpkin wasn’t just for pie… Pompillon is a Belgian-style Tripel, hopped with Northern Brewer and Saaz hops, that’s more than your average slice. The Belgian yeast offers a mild, clovey-cinnamon spiciness that hints at tradition but diverges from the classically styled pumpkin beers. 8% ABV

Cascade smashed and triple roasted 50 lbs of pumpkin down to 6 lbs, then aged the beer for 11 months on the roasted pumpkin in rum barrels. Spice, Roasted pumpkin and run is followed by a soft warming finish. 12.5% 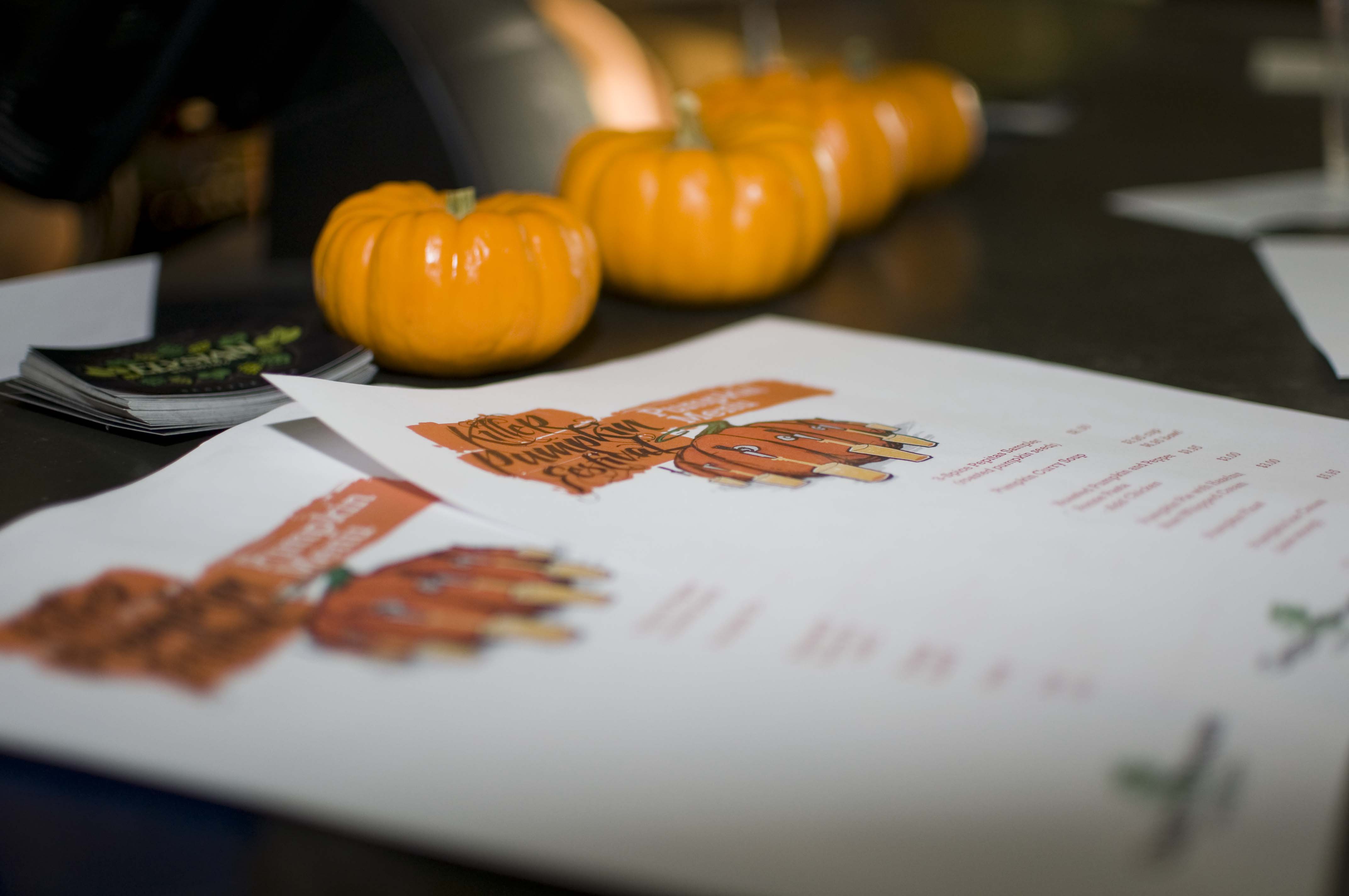 “A Clockwork Pumpkin” is not overdone on spice. All the key components of a great pumpkin ale are present but not overboard. It really is a well balanced and flavorful offering. 6.5% ABV

Imperial Sour Pumpkin Lager – Our first ever pumpkin beer actually has pumpkin in it – nearly 200 pounds! It was lightly kettle soured and gently spiced to make sure the pumpkin still comes through. 8.7% ABV

The event is free but a generous donation of $5.00 will go towards benefiting Camp Ukandu. This organization brings joy and hope to children living with cancer, their siblings, and their families through “outrageously fun” camping experiences.