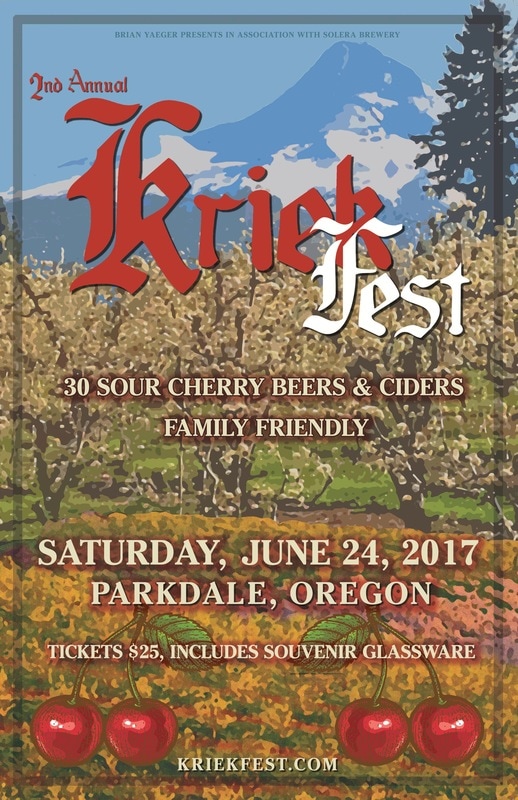 With Mt. Hood looming gracefully in the distance Kriekfest returns for its second year to Parkdale, Oregon. Kriekfest, the largest celebration devoted exclusively to barrel-aged cherry beverages will be held on Saturday, June 24, 2017 next to Solera Brewery from Noon until 6:00pm.

For the second installment of Kriekfest, festival founder Brian Yaeger has secured an impressive list of 30 sour cherry beers and ciders from as close as the festivals host brewery to a few rare European produced krieks. This lineup includes 26 krieks, 3 cherry ciders and 1 beer/cider hybrid. Eleven of the offerings will be brand new to the festival this year.

Kriekfest 2017 tickets are now available in advance online at merctickets.com/go/Kriekfest. Entry is $25.00 ($27.54 after fees) and includes 8 tickets for 4 oz. pours along with a commemorative tasting glass. Beer samples begin at 2 tickets per 4 oz. pour and at the inaugural many of the most desirable and sought after krieks were in the 4 to 7 ticket per pour range due to the beers hefty cost.

Last year’s event sold out and entry is capped at 750 people. If there are tickets available the day of Kriekfest entry will increase to $30.00. Designated drivers and minors will be admitted free.

Kriekfest is also offering a tour package that includes transportation from Portland to Parkdale and is available online for $69.00 ($74.27 after fees) and includes 3 extra tickets by. The Kriekfest Bus will depart Portland from Laurelwood Brewing on NE Sandy Blvd. at 10:00am and arrives back at Laurelwood at 6:00pm. Plus drinking is allowed on the bus!

Listed below are the participating breweries and its beers that will be pouring during the daylong event. Organizer Brian Yaeger also compiled each beer’s respective RateBeer point rating.

Since Kriekfest is being held in a rural setting along the Hood River Fruit Loop, festival attendees are being encouraged to camp in the area. If this is something that you’re considering its better to prepare early as the nearest campground, Toll Bridge Park fills up fast and is only a 2-mile walk to the east. For other area info check out the Hood River County Chamber of Commerce.