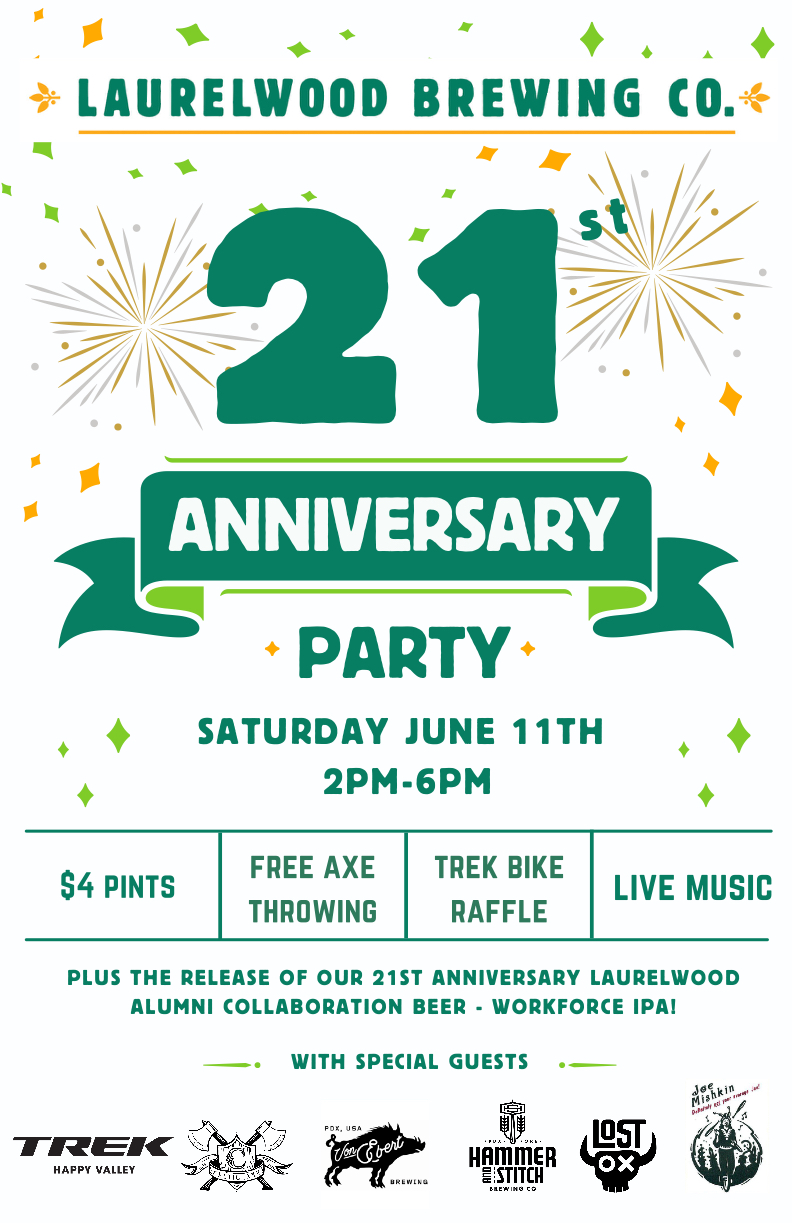 In a few weeks, Laurelwood Brewing will celebrate a large milestone as it welcomes its loyal fans to its 21st Anniversary Party. Taking place on Saturday, June 11th from 2:00-6:00pm, the block party will feature fun for the entire family and the debut of WorkForce IPA, a collaboration beer with many of Laurelwood’s former brewers.

Laurelwood Brewing was founded in 2001 by the husband and wife team of Mike De Kalb and Cathy Woo-De Kalb. The original Laurelwood Public House & Brewery was opened in the Hollywood district of Portland, Oregon in March 2001 in a defunct pub location with a 7-barrel brewery. They opened Laurelwood Public House & Brewery with a goal to create an eating and drinking establishment (a place) where all could feel welcome. They wanted it to feel like you were at a party at their house, where moms, dads, kids, single friends, and neighbors all mingling together to create a positive energy. “A Place Where Friends and Families Meet.”

For the big milestone, Laurelwood invited many of its former brewers back for a collaborate beer, WorkForce IPA. If this name sounds familiar, its because this beer is a modern take on Laurelwood’s most recognizable beer, Workhorse IPA. This 21st Anniversary Laurelwood Alumni Collaboration Beer features Christian Ettinger, Ben Dobbler, Cameron Murphy, Eric Ebel, Noah Palmer, Shane Watterson and Paul Bergman, all former brewers at Laurelwood. In addition to this special beer, Laurelwood will also be pouring beers from Von Ebert Brewing and Hammer & Stitch Brewing Co.

Laurelwood will also be raffling off a brand new Trek bicycle with proceeds benefiting Bikes 4 Humanity. Entering to win this Trek is easy and also includes a $200 Gift Card for accessories. Just join the fun at Laurelwood Brewing’s 21st Anniversary Party and purchase a raffle ticket for only $5 or purchase five tickets for $20!