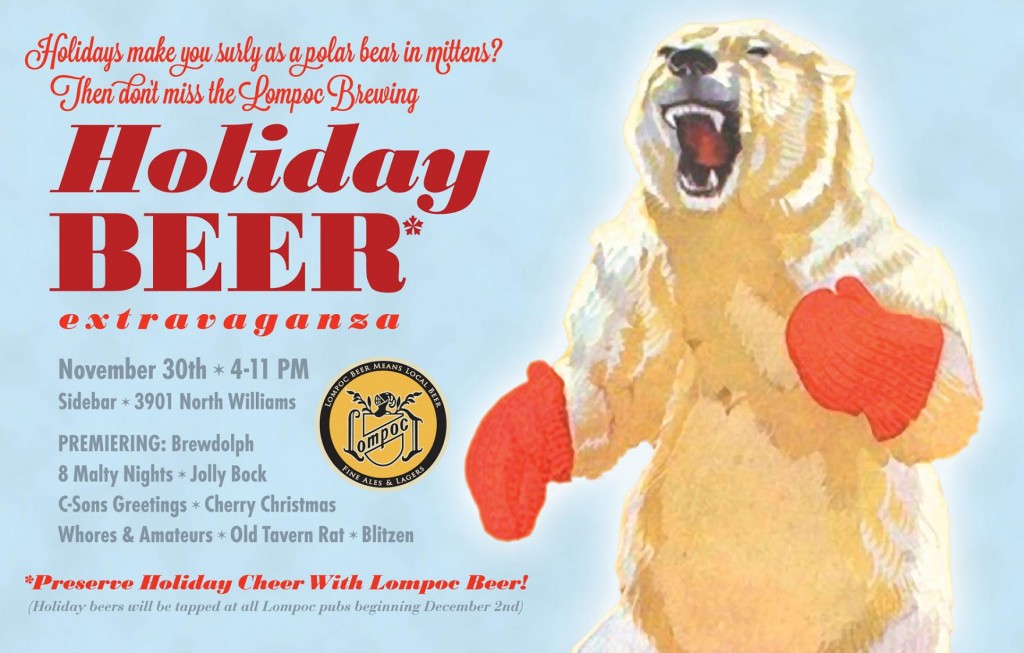 An excellent way to kick off the week of the Holiday Ale Festival is with Lompoc Brewing at its Sidebar on Monday, November 30 as the prolific brewery releases eight holiday seasonals at it annual Lompoc Holiday Beer Extravaganza.

Beginning at 4:00pm, Sidebar will be releasing all eight of its holiday themed seasonals all in one location. The 2015 lineup of Lompoc holiday seasonals includes 8 Malty Nights, Blitzen, Brewdolph, C-Sons Greetings, Cherry Christmas, Jolly Bock, Old Tavern Rat and Whores & Amateurs. And be on the lookout for Whores & Amateurs at this year’s Holiday Ale Festival.

If you cannot make it by Sidebar on Monday these eight beers will be hitting the taps at the other four Lompoc locations beginning on Wedensday, December 2. These locations include Lompoc Tavern on NW 23rd Ave, Oaks Bottom Public House on SE Bybee Blvd, Hedge House on SE Division St, and Fifth Quadrant on N Failing and Williams. Also be on the lookout for C-sons Greetings as this seasonal is available in 22 ounce bottles. 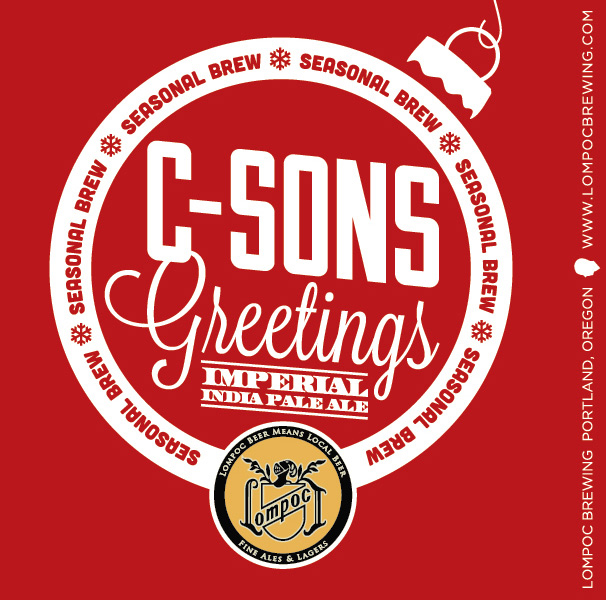 Here are the beer descriptions provided from Lompoc.

BLITZEN: A bright straw colored holiday favorite, Blitzen is dry-hopped with Centennial hops, dried lemon peel and coriander. The hops and lemon peel combine for a citrusy aroma and flavor while the coriander gives a slight spice at the back end. 4.6% ABV

BREWDOLPH: This Belgian style red ale features a malty and creamy body. Brewed with the Belgian Ardennes yeast strain, it boasts a mild fruitiness and a spicy clove character. 7.7% ABV

CHERRY CHRISTMAS: This red ale was aged for two years in Maryhill Winery Merlot barrels on 45 pounds of sour cherries. It has a malty body,  a strong oak aroma with hints of cherries, and finishes tart. 6.2% ABV

JOLLY BOCK: This lager was brewed with a generous amount of Munich malt to develop the deep amber color and rich malt flavor. The malty flavor is balanced with a spicy hop bitterness. 7.3% ABV

OLD TAVERN RAT: This dark amber-colored barleywine was aged for almost a year prior to its release. It has a strong bitterness that is balanced by the sweetness of caramel and toffee flavors. 9.4% ABV

WHORES & AMATEURS: Aged in bourbon barrels for six months, this beer is not for the faint of heart. Brownish red in color, this winter warmer has a big malt presence with notes of oak, raisins, toffee and coffee. Ladies of the night and rookies should steer clear of this awesome beer. 6.5% ABV