Today we have an evening of Lompoc Reds and on Thursday we have St. Patrick’s Day and two big birthdays. 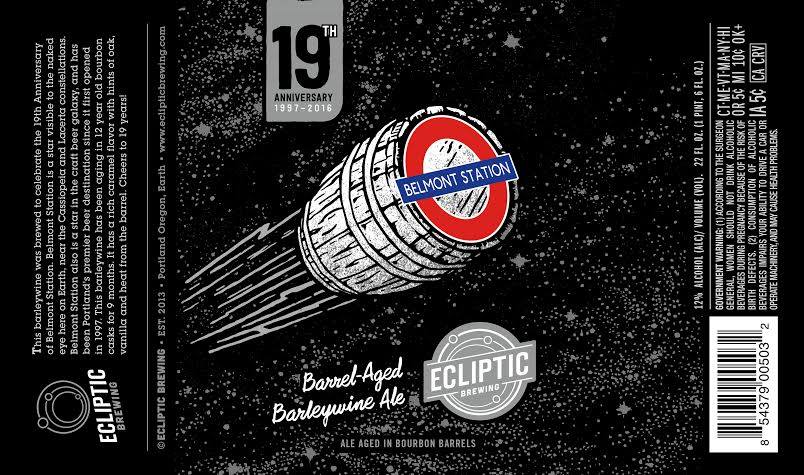 Plus they’ll have a sneak preview of their 19th Anniversary beer: a bourbon barrel-aged barley wine by Ecliptic. That will be pouring in the taproom on March 17 but on March 21, the anniversary celebration will expand to include bottles of the Anniversary barley wine available for sale in the bottle shop and Oregon brewing legend and Ecliptic owner/brewer John Harris will be on hand for that party, too… 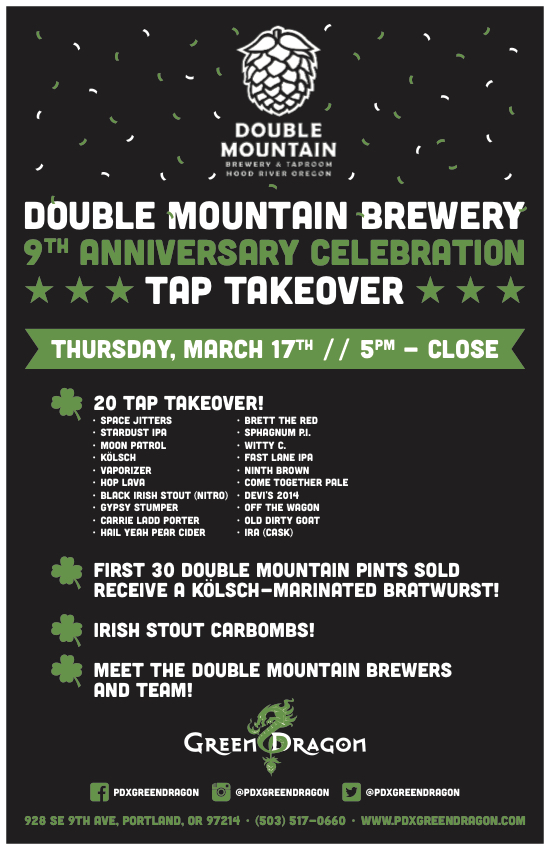 Double Mountain Portland Style Ninth Anniversary Party
5 p.m. Thursday March 17, Green Dragon, 928 S.E. Ninth Ave.;
Disguised as a mild-mannered meet-the-brewer event, this is in fact a big-ass party celebrating nine years of one of Oregon’s finest breweries, and the first 50 customers in the door who purchase Double Mountain beer will receive a Kolsch marinated Bratwurst. Irish Stout carbombs will also be available and the Dragon is expecting David Alan, Andrew Russo, and Head Brewer Greg Balch from the brewery for this 20-tap takeover extravaganza. Here’s the list:

25th annual Kells St. Patrick’s Day Festival
Thursday March 17 – Sunday March 20, Kells Irish Pub, 112 S.W. Second Ave; Kells Brew Pub, 210 N.W. 21st Ave; $5 – $20 cover charges at different times.
The annual bash is the Northwest’s largest St. Patrick’s Day event and this year’s festival happens over four days and four venues: inside the venerable Kells Pub; in a festival tent in the pub’s back parking lot; at the Kells Brew Pub; and in a festival tent at the Brew Pub. Entertainment starts at 11:30 a.m. in the festival tent Thursday and my old friend Mike Beglan (publican of the much-loved East Avenue Tavern and founder of the Alberta Street Pub after that) will take the stage at Noon as the first of a roster of dozens of musicians over the weekend. If you’re in the mood for St. Patrick’s, Kell’s is the place to celebrate.

Shamrocks & Shenanigans with Crux
5-9 p.m. Thursday March 17, NW IPA, 6350 S.E. Foster Rd.;
The N-Dubs crew asks why drink you’d Guinness on St Paddy’s Day when you could drink Crux Tough Love? They’ll have 2014 and 2015 Tough Love on tap plus some pub only IPAs from the brewpub in Bend. Plenty of House of Pain for your ears.