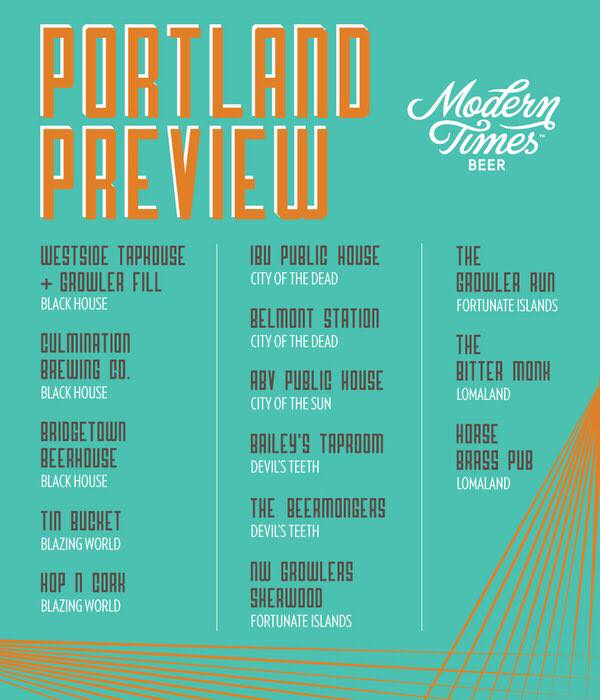 Modern Times Beer is a three-year-old San Diego based production brewery that has seen both significant popularity and growth during this time. Founded by Jacob McKean, Modern Times Beer brews on a 30 BBL brewhouse and keeps its distribution tight to its Southern California roots. However some beers will get as far north as the Bay Area and across the Pacific Ocean to Hawaii.

For those that attended this past weekend’s Baker’s Dozen Coffee Beer, Doughnuts and Coffee Fest you may have noticed that Modern Times serving its Black House, a coffee stout, at the event. McKean was at the event serving his Modern Times Coffee that his business roasts and uses in its coffee beers. Baker’s Dozen founder, Brian Yaeger, worked with McKean and General Distributors to get this well received beer to the festival. In doing so McKean decided to add a few more beers to the shipment for a Modern Times Beer Portland Preview that will take place at area beer bars during the coming weeks. 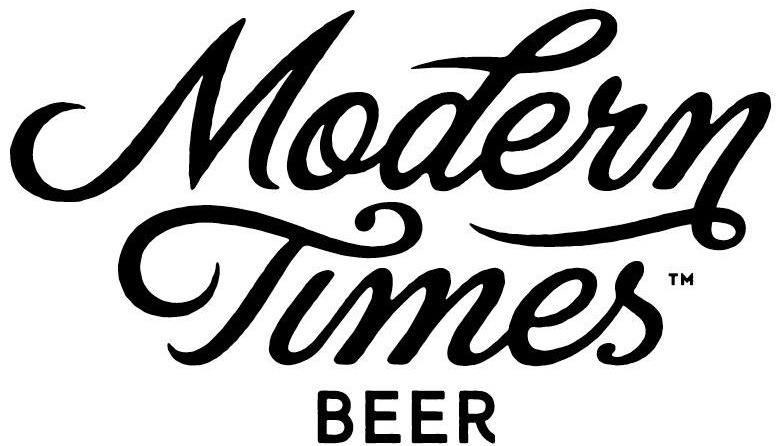 Over the next week be on the lookout for seven beers from Modern Times hitting the Portland area, even as far south as Salem. These beers include the aforementioned Black House, plus Blazing World, City Of The Dead, City Of The Sun, Devil’s Teeth, Fortunate Islands, and Lomaland. This shipment of Modern Times Beer to Portland is a one time thing so don’t delay in your search.

Listed below are the beer descriptions provided by Modern Times and the locations that are scheduled to receive kegs for each of these beers this week from General Distributors.

Black House
Black House is an oatmeal coffee stout bursting with coffee aroma and flavor. Modern Times is one of the only breweries in the world to roast our own coffee, which allows us to be exceptionally picky about which coffees we use and how we roast them. The result is an abundantly flavorful beer that’s incredibly complex and aromatic, with loads of roast character and a chocolate-covered espresso bean finish. Black House is also available on Nitro. So creamy.
ABV – 5.8%
IBU – 40
Culmination Brewing – 2117 NE Oregon St, Portland, OR 97232
Westside Taphouse + Growler Fill – 1594 Edgewater St NW #110, Salem, OR 97304
Bridgetown Beerhouse – 915 N Shaver St, Portland, OR 97227

Blazing World
This beer is the stickiest of the icky. It’s a luxuriously hoppy amber loaded up with intemperate quantities of Nelson, Mosaic, and Simcoe hops, which are some of the fruitiest, dankest hops sweet, sweet money can buy. Despite its amber hue, Blazing World is pleasingly dry, sporting a lightly bready malt backbone that serves as platform for the huge & complex hop profile.
ABV – 6.8%
IBU – 85
Tin Bucket – 3520 N Williams Ave, Portland, OR 97227
Hop N Cork – 17450 Lower Boones Ferry Rd, Lake Oswego, OR 97035

City Of The Dead
City of the Dead is a big, full-bodied stout with lots of chocolate undernotes dominated by the bourbon barrel aged coffee. The beer is dosed at 1 pound per barrel, and has a distinctly rich, bourbon coffee aroma and flavor. As the beer warms, the bright bourbon aroma settles in and the coffee base really shines. This is the first commercially bottled barrel aged coffee beer in the world (that we know of!)
ABV – 7.5%
IBU – 45
IBU Public House – 4439 SW Beaverton Hillsdale Hwy, Portland, OR 97221
Belmont Station – 4500 SE Stark St, Portland, OR 97215

City Of The Sun
City of the Sun is a big, fruity, pungent, sticky, delicious IPA. Mosaic & Motueka give it a very fruity hop character, with Simcoe providing enough of a piney backbone to prevent it from going off the deep end. The complex but unobtrusive malt character gives it a medium body and a platform for the saturated hop flavor.
ABV – 7.5%
IBU – 85
ABV Public House – 23588 NW Clara Ln, Hillsboro, OR 97124

Fortunate Islands
Fortunate Islands shares the characteristics of an uber-hoppy IPA and an easy drinking wheat beer. A massive dose of Citra and Amarillo hops gives it a blastwave of tropical hop aromatics: mango, tangerine, and passionfruit all leap out of the glass. Brewed with 60% wheat malt, Fortunate Islands also has the mild, nutty malt backbone, reasonable ABV, and restrained bitterness to make it an outstanding session beer.
ABV – 5.0%
IBU – 46
NW Growlers-Sherwood – 21025 SW Pacific Hwy, Sherwood, OR 97140
The Growler Run – 19502 Molalla Ave #117, Oregon City, OR 97045

Lomaland
Lomaland is an earthy, rustic Belgian-style farmhouse ale that’s both complex and quaffable. It smells like hay, pepper, and friendly sunshine. Its dry, cracker-like body and lightly-hoppy finish makes it a beautiful compliment to food. We named Lomaland after the brilliantly crazy utopian community that was the first settlement built in Point Loma, the San Diego neighborhood where our fermentorium is located.
ABV – 5.5%
IBU – 30
The Bitter Monk – 250 NE 3rd St, McMinnville, OR 97128
Horse Brass Pub – 4534 SE Belmont St, Portland, OR 97215