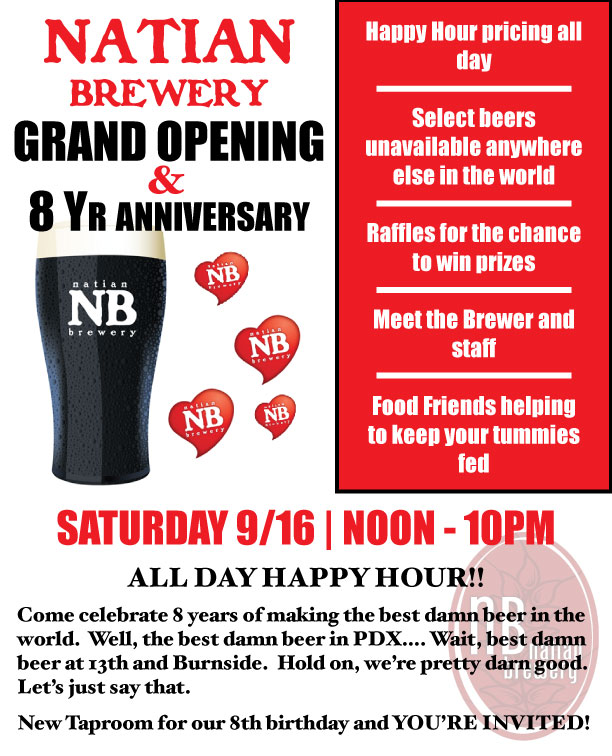 Having a passion for craft beer brings many into the industry that we all enjoy. Eight years ago Ian McGuinness caught this “bug” and opened Natian Brewery, his 1-barrrel nanobrewery tucked away in a corner at Portland Bottling.

It was back in 2005 when McGuinness relocated to Portland to take a position at Portland Bottling where he continues to work as its Director of Quality. The long time bottler that dates back to 1924 was well known for producing 7Up and RC Cola for the Rose City but as years went by the bottler now is primarily producing energy drinks and other various soft drinks.

Energy drinks must be what McGuinness consumes as he brews in any spare time he has from his current day job. For the first four years he continued to brew on his nano system until he made an upgrade to his brewery in December 2012. This is when Natian Brewery made the large jump from a 1-barrel system to its current 10-barrel brewhouse. But even with this increase his brewery still located inside Portland Bottling at the corner of NE Sandy and NE 14th.

This Saturday, September 16th, Natian Brewery will celebrate 8 Years as well as host its Grand Opening of Natian Brewery Tasting Room from Noon to 10:00pm. All day long on Saturday Natian will feature Happy Hour pricing. This is in addition to the free pizza provided by Peluhu Pizza at opening until it runs out. Then for every $5 you spend you receive a raffle ticket for drawings throughout the day of various prizes from swag to gift cards to restaurants and a few beer themed grand prizes.

Since he was all in he kept at it brewing up 1-barrel batches for the first four years. This obviously proved to be a challenge when trying to sell beer into a marketplace such as one that is as mature as it is here in Portland.

McGuinness elaborates, “Having to brew 7-10 batches per week just to have a few kegs to get out into the market. Every year we were in OBF we brewed the same beer for a month straight, almost daily just so we would have enough for the event and then a few kegs left over for craft beer bars afterwards.”

Finally at the end of the year in 2012 he expanded to his current 10-barrel brewhouse in hopes of alleviating this supply issue. However as a one man (and friends willing to assist) operation moving into a larger brewhouse did not solve all problems.

“Bigger vessels just take longer to clean,” states McGuinness. “Dealing with larger inventories is simply more time consuming when you’re doing stuff solo, like moving 40 kegs into a cooler.” He jokingly adds, “I try to say its my workout for the day but my beer gut says otherwise so I still have to exercise at the end of the day to keep this beautifully sculpted (round) body.”

After expanding his brewery in 2012, McGuinness’ next move was to open a tasting room. Last month this four-year search was made complete when he opened Natian Brewery Tasting Room below the newly opened The Alexander Apartments on lively East Burnside. With 17 taps, lots of window space and upcoming outdoor seating McGuinness feels that he finally found the right spot.

“I’ve been trying to open a tasting room for a few years now,” states McGuinness. “Since I can’t have it in the brewery a second location is necessary. I’ve been limited in my search because I’ve been looking no farther than a block away. A few negotiations have fallen through over the years with a few locations but our new location in the Alexander Building was worth waiting for due to it proximity to the brewery and its design. I simply love all the windows!”

Since the tasting room does not serve food he is working with a few locals restaurants that are offering delivery and/or take out. “Mad Greek has been helping us out tremendously along with Michaels, Pizzicato, Pulehu Pizza and a few food carts like Fish Box and Big Red,” writes McGuinness.

So what does the future hold for Natian Brewery? The brewer currently has been working over the past few years with General Distributing in Oregon and is even more committed to working with them. “We’ve been seeing some growth in our own backyard and with the tasting room stretching us thin on inventory we don’t want to over reach,” states McGuinness. “I’m thinking we can look into expanding out to Vancouver before next summer. We’ve received interest from locations in Eugene and Bend but haven’t found the right distributor for those areas yet.”