Since today is Earth Day, it’s fitting that the year’s North American Organic Brewers Festival has announced its return to celebrate 11 years this summer. Now with new dates that will guarantee* perfect weather, founder Craig Nicholls has moved the festival to a later date in the summer from August 13 – 16.

Best of all the NAOBF will once again take place in scenic and TriMet convenient Overlook Park in North Portland. Then as an added bonus, this year’s NAOBF will add an import bottle garden to expand the festival’s organic beer offerings.

PORTLAND, ORE – April 23, 2015 – The world’s only organic brewers festival, the North American Organic Brewers Festival will celebrate its 11th years with a new date: the event has moved away from its traditional June weekend to August 13 through 16 at Overlook Park in North Portland. Event hours are Noon to 9pm Thursday through Saturday and Noon to 5pm Sunday.

“Another beer promoter chose to move his Portland beer festival to our June date,” explained event founder Craig Nicholls. “Since we share the same pool of volunteers, and in many cases attendees, we opted for another date to benefit both events. The good news is August gives us a much better chance of drier summer weather!”

The NAOBF encourages brewers and beer lovers to “Drink Organic, Save the Planet, One Beer at a Time.” Designed to raise awareness about organic beer and sustainable living, the festival serves up 50 organic beers and ciders from more than 30 different breweries. Some of the breweries are certified organic, but most brew a one-off organic batch just for the event. Styles run the gamut from Ambers to Belgians to Wild Ales, with a bit of everything in-between. (A complete list of participating breweries in included at the bottom of this release.) The event also offers live local music, organic food and sustainability-oriented vendors and non-profits in a beautiful park setting.

This year’s event will also feature an exceedingly rare opportunity to sample draft beer from Pinkus, the world’s first certified organic brewery. Along with Pinkus Ur-Pils and Münster Alt on draft, the festival is introducing the Merchant du Vin Organic Bottle Garden, featuring 11 bottled beers and cider from Pinkus in Germany and Samuel Smith’s from Yorkshire, England.

“When Samuel Smith’s opened in 1758 and Pinkus in 1816, chemical fertilizers and pesticides didn’t exist – all beer was organic,” stated Tom Bowers, district manager at Merchant du Vin. “Viewing the beer world from this historic perspective, these brewers chose to become the trailblazers of organic brewing for the modern era. By including Samuel Smith’s and Pinkus in this year’s festival, NAOBF has expanded the opportunity for festival goers to not only experience amazing beers from the world’s original organic brewers, but to taste history.” 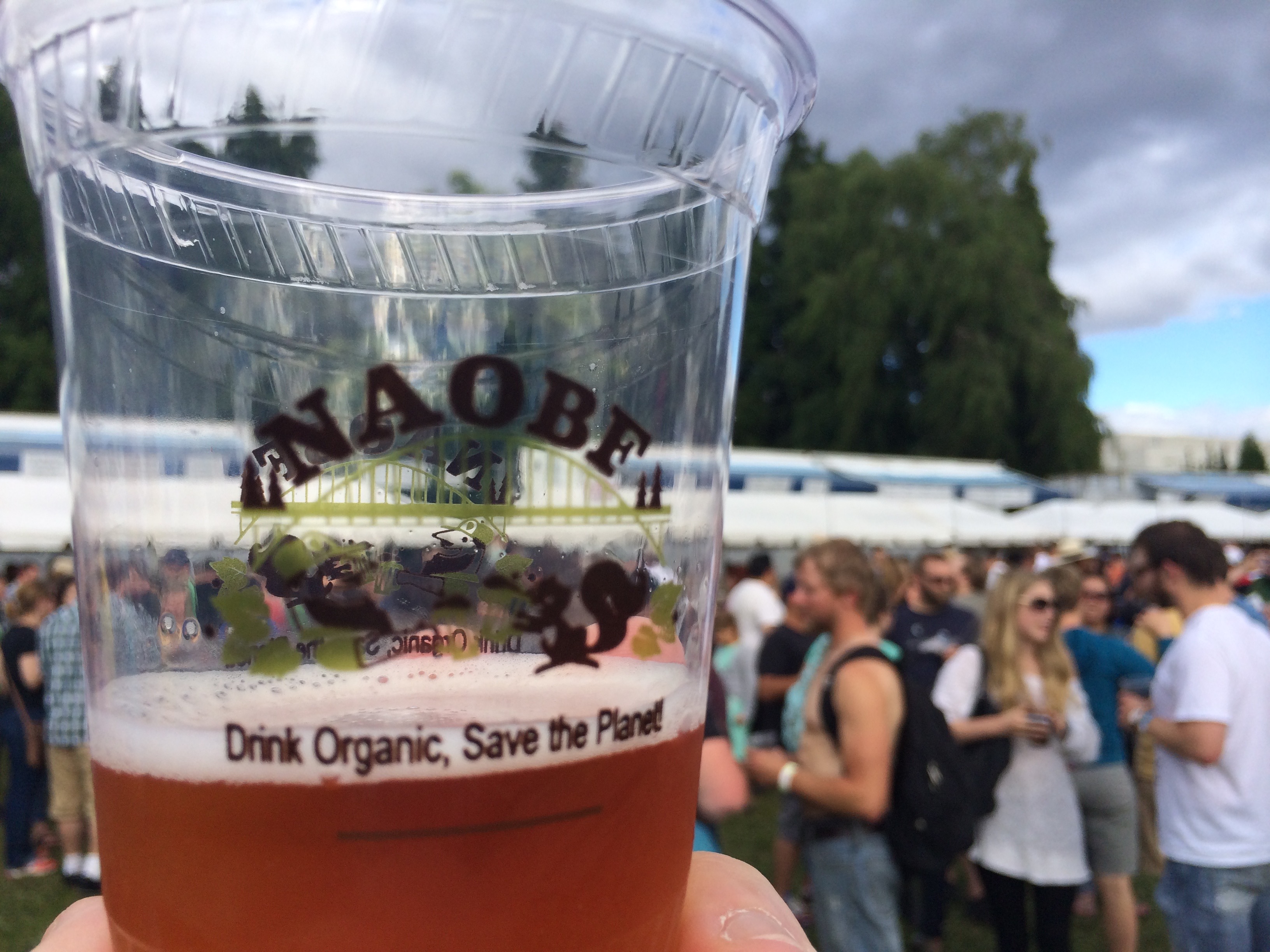 Admission into the NAOBF is free. The purchase of a $7 reusable, compostable cornstarch cup is required for tasting beer, as are tokens, which sell for $1 apiece. A full cup of beer costs four tokens and a taste costs one token; select beers and ciders may cost double tokens. Patrons receive an extra token with a validated Tri-Met ticket or a ticket from the Hopworks Bike Corral (one discount per person).

The NAOBF is a family friendly event, and minors are welcome with parents. A kids area offers art activities, face painting and a root beer garden with complimentary Crater Lake Root Beer for minors (and designated drivers).

The NAOBF is known as the most earth-friendly beer festival on the planet. Festival attendees sample beer from reusable and compostable cornstarch cups made from domestically grown corn by a zero-waste, solar-powered company. Electricity needs are met with biodiesel generators. Volunteers receive organic cotton t-shirts (returning volunteers can wear past T shirts and get extra tokens instead). Food vendors are required to employ sustainable practices, and onsite composting and recycling stations are provided for festival waste and are supervised by recycling czars.

The NAOBF encourages responsible drinking and urges patrons to take advantage of the MAX Light Rail; the Yellow Line Overlook Park Station is adjacent to the festival. Attendees can also take advantage of the Hopworks Bike Corral, where volunteers watch over bikes for free (donations are appreciated and support the BC to Baja Bicycle Odyssey). 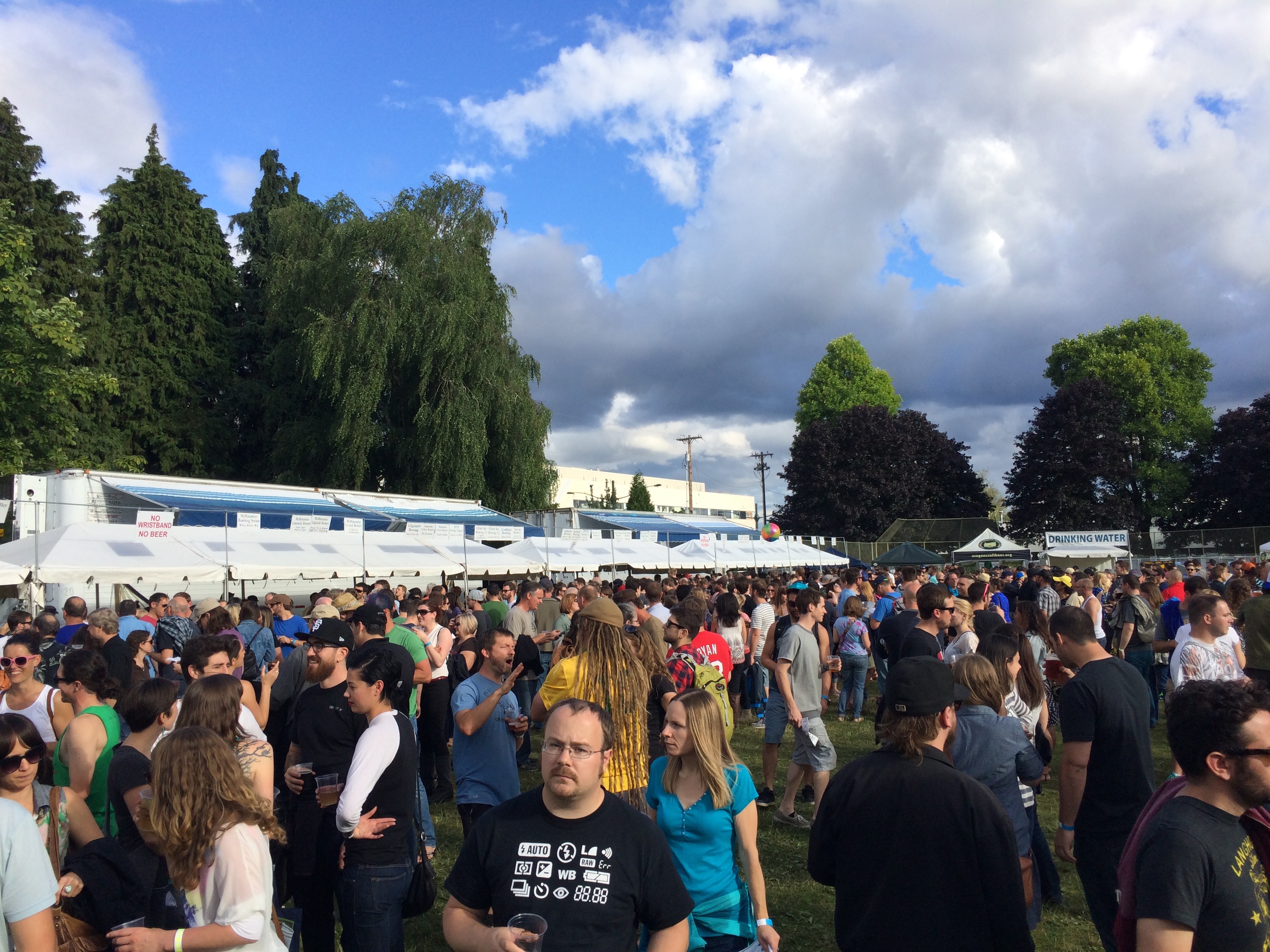 Why brew organic? Today’s agriculture relies heavily on chemicals and often causes erosion and depletion of soil nutrients through loss of biomass. Organic farming is a growing industry that reduces erosion, pollution, and water shortages by using natural methods to fertilize crops and to fight pests and disease. A well-established organic farm can often produce higher yields than a conventional farm. Organic farming is typically more labor intensive and provides more agricultural jobs per acre than conventional farming. Workers on organic farms are also safe from the health hazards of working with pesticides and herbicides. Using organic ingredients to make beer produces a beer with the highest possible purity and also supports the small but growing industry of organic farming.