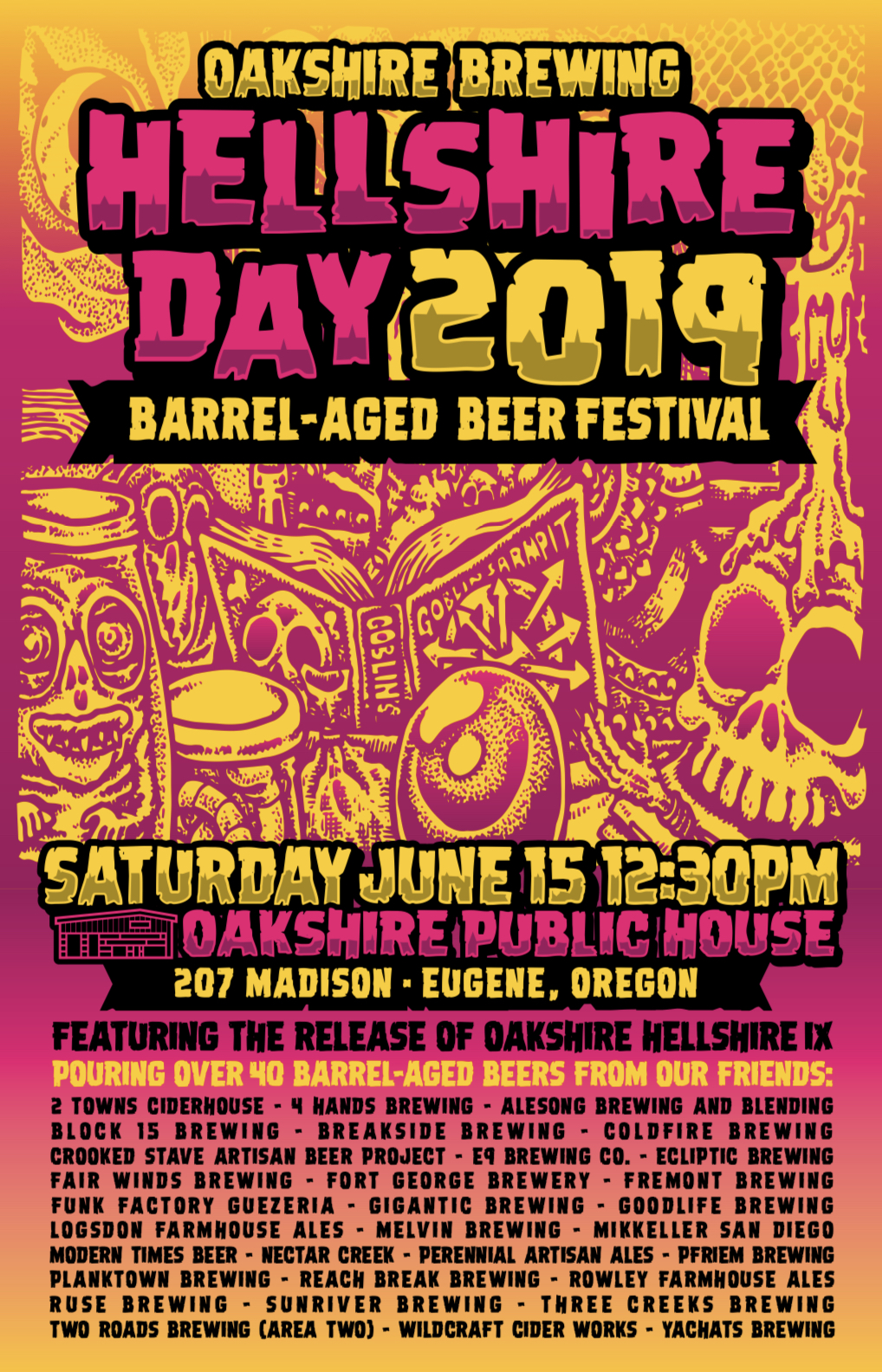 Nine years running, Hellshire IX, the ninth release in the Hellshire series of barrel-aged beers from Oakshire Brewing will be released on Saturday, June 15th. This beer release will be part of the 6th annual Hellshire Day and Barrel-Aged Beer Festival that brings together barrel-aged beer from breweries from around the country.

Once again on the eve of Hellshire Day, Oakshire Brewing will host the Hellshire Experience. This $115 ticket for a special evening that includes mingling with the Oakshire Team and exclusive tastings of Oakshire’s vintage beers as well as BBQ from food cart favorite Rackhouse. Plus there will be live music from Corwin Bolt & the Wingnuts, and the first taste of Hellshire IX.

Then on the following day, Hellshire IX, an Imperial Stout aged in Kentucky Bourbon Barrels for 9 months will be released to the general public during Hellshire Day. This annual release will be available on draft and in 22oz waxed dipped bottles at $20.00 each. Entry into Hellshire Day is $30.00 in advance or $35.00 at the door and takes place from 12:30-6:00pm.

Here’s a preview of the breweries and cideries that will be part of 2019 Hellshire Day.

On Saturday, June 15th, Hellshire Day kicks off at 12:30pm with an incredible variety of barrel-aged beers in a small, casual, beer festival atmosphere. The beer list evolves weekly due to extremely limited availability for many of the beers; and the list currently has 30 breweries represented and 35 beers being poured. The festival will also feature live shirt printing from Threadbare PrintHouse; and food carts Rackhouse BBQ, Oregon Wood Fired Pizza, Bing King, and Sweet Bay Shave Ice. Non-profit Center for Appropriate Transport (CAT) will provide valet bike parking and Ding Ding Cycles will offer tune-ups and bicycle safety checks. Live DJ Connah Jay will be playing music all afternoon. The Nearly Final Beer List will be released via social media and our website on 5/31/19.

The Hellshire Day Barrel-aged Beer Festival takes place at the Oakshire Public House 207 Madison Street in Eugene from 12:30pm to 6:00pm. Tickets are available now: $30 presale online at oakbrew.com or at the Oakshire Public House, or $35 on Hellshire Day. Tickets include entry to Hellshire Day, five (5) beer tokens, and a limited edition festival glass. Many beers are one token ($2) per 4oz. pour. Designated Driver tickets are also available. All entries require a ticket.

Hellshire Day is punctuated by the release of Hellshire IX, an Imperial Stout aged in Kentucky Bourbon Barrels for 9 months. Clocking in at 13.0% ABV, Hellshire IX is a bold and otherworldly stout available in 22oz. wax dipped bottles with label art by Weirdo Artist Sean Aaberg.

Oakshire’s Director of Brewing Operations, Dan Russo, says of the beer, “Hellshire IX took us back to the basics of brewing and blending high gravity barrel-aged beer. The character of the freshly dumped bourbon barrels became the star ingredient in this blend, imparting rich vanilla and caramel characteristics with a pleasant hint of cola. We love using adjuncts, but this years straight forward barreled beast is sure to stand out among the past few vintages of Hellshire.” Hellshire IX bottles are available to purchase during Hellshire Day, $20 per bottle.

Furthermore! On Friday, June 14th (Hellshire Eve) from 6-9pm we offer the Hellshire Experience an evening with the Oakshire Team and exclusive tastings of Oakshire’s vintage beers as well as BBQ from food cart favorite Rackhouse. Live music from Corwin Bolt & the Wingnuts, and the first taste of Hellshire IX.

The Experience Ticket includes one 750 mL bottle of Hellshire Experience Green, a Double Barrel Apple Brandy Imperial Stout with Vanilla Beans, which Russo describes as, “an Imperial Oatmeal Stout aged in a Kentucky bourbon barrel for 11 months then transferred to a single American Apple Brandy cask to age for an additional eight months and conditioned on a blend of Madagascar Bourbon and Tahitian vanilla beans at a rate of 1.5#/bbl.” The draft of this beer will be on tap that night along side two other highly anticipated creations from Dan Russo and the Oakshire Team:

The Hellshire Experience ticket also includes early admission on Hellshire Day for a VIP session from 11:00am-12:30pm. New this year for the VIP session are tastings of selected bottle pours from a few of our favorite breweries available only during this VIP session. 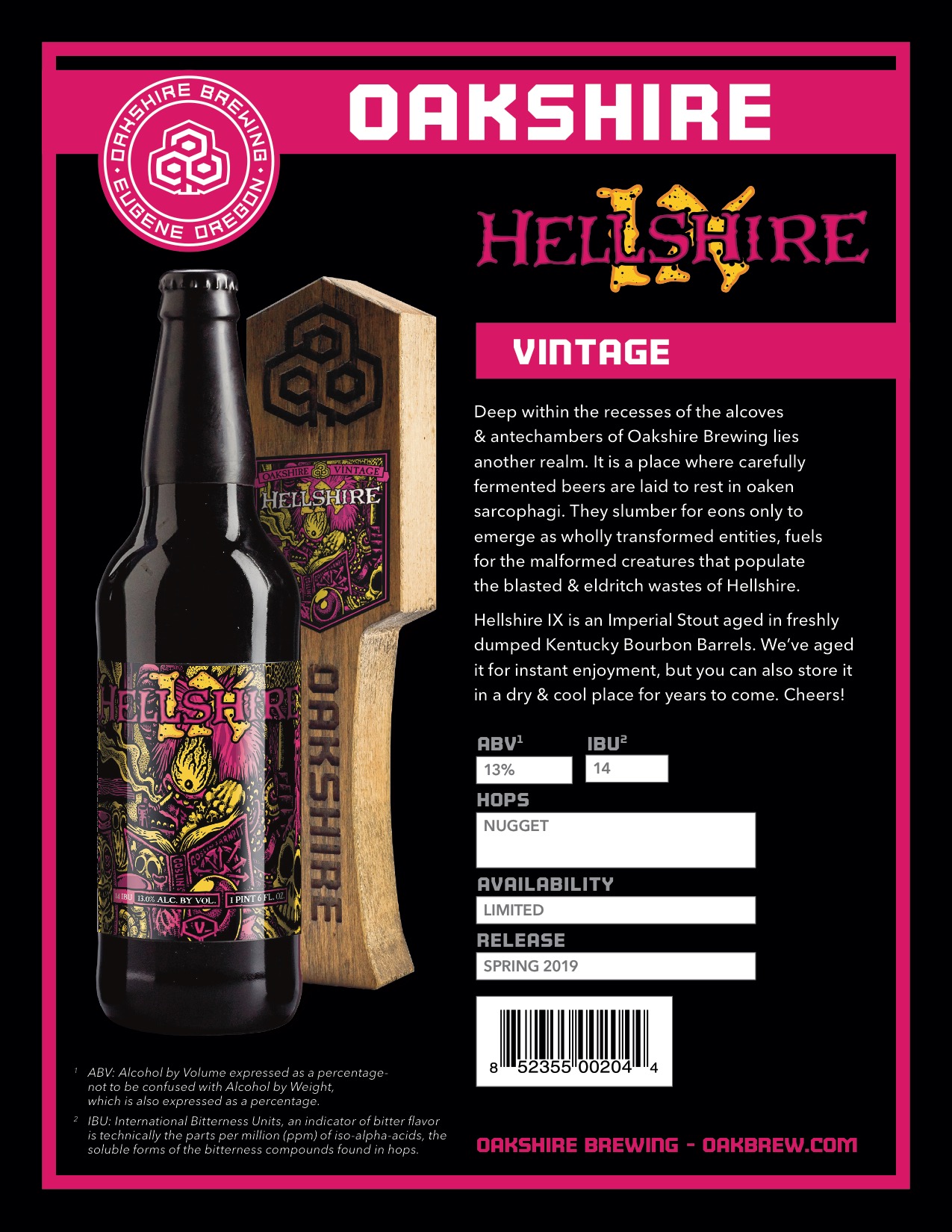