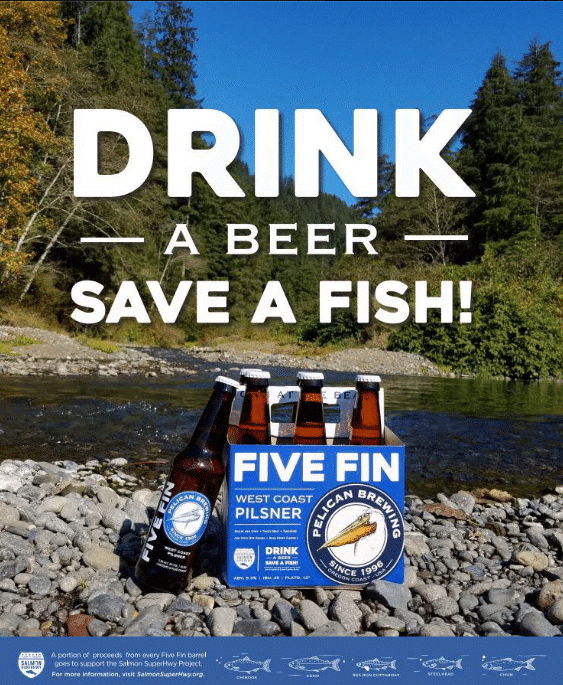 Pacific City, Oregon (May 15, 2017)—It’s American Craft Beer Week (May 15—21) and the craft beer industry is asking the brewing community—and beer lovers—to ‘Beer it Forward’ by giving back and supporting community causes. Pelican Brewing Company has answered the call.

True to its mission to protect and sustain the coastal area it calls home, Pelican invites brew lovers to ‘drink a beer and save a fish.’ A portion of proceeds from every barrel of Pelican’s Five Fin west coast pilsner sold will be donated to the Salmon Superhighwy—an unprecedented effort to restore access to almost 180 miles of blocked habitat throughout six major salmon and steelhead rivers of Oregon’s North Coast.

Pelican will also sponsor and host its inaugural Pelican Salmon Run on September 23, 10 a.m. in Tillamook, Oregon as a fundraiser for the Salmon Superhighwy. Registration is now open for the 5K and 10K races which begin and end at Pelican’s Tillamook brewery and taproom and take runners on a scenic tour in and around Tillamook.

“Pelican Brewing is proud to support the Salmon Superhwy Project and since becoming aware of the project last year, we have been looking for more ways to increase awareness and raise funds”, says Jim Prinzing, CEO Pelican Brewing. “We started that effort by creating Five Fin west coast pilsner, a beer we designed specifically for this organization, and now we are really excited to host the Pelican Salmon Run to raise money and educate more folks about this important initiative that in some way impacts all of us.”

According to an article on CraftBeer.com, “craft brewers exemplify the ‘Beer it Forward’ ideal every single day. They believe in the value of community and giving back, supporting causes from veterans to homelessness to a cleaner environment. That’s why this American Craft Beer Week, the theme #beeritforward is directed to the rest of our fine beer community. How can you brighten the lives of others through craft beer?”

‘Beer it Forward’ with purchase of Five Fin
Inspired by the crystal clear waters of the six Tillamook County rivers and named for the five ocean-going species of fish benefitting from the salmon recovery effort, Five Fin is a uniquely ‘west coast’ take on the classic Pilsner beer style. Bright and zippy with a bold hoppy flavor and aroma, Five Fin is crafted with a unique blend of Cascade and Sterling hops from the Pacific Northwest and Mandarina Bavaria hops from Germany. The new pilsner marries the hop-driven flavors of tangerine, pineapple, and lemon zest with classic spicy, floral notes, all balanced against a toasty malt character:
ABV: 5.3% | IBU: 45 | PLATO: 12º

“We wanted to create a beer that would successfully support this unique restoration project—when we think about salmon, we think of the clean, cold, crisp flowing rivers here and imagined Five Fin to mirror that,” says Jim Prinzing, CEO, Pelican Brewing Company. “We love pilsners and we love American hops and this beer brings those two elements together in a bold, refreshing way.”

The beer is available now in the grocery craft beer aisle in 6-packs, 12 oz and 22 oz bottles; 50 liter kegs and 1/6th barrels are also available for on-premise pours.

Pelican leading private donations to the 93-project campaign
The Salmon Superhighway project is a strategic and intensive effort across a six-river landscape to reconnect fish populations with the habitat they need to navigate and survive. Started in 2014, the $35.8M campaign is expected to run through 2024 to improve the habitat for salmon in 93 different locations throughout Tillamook County.

Hundreds of barriers in streams still create bottlenecks throughout Oregon’s coastal watersheds—most are problem culverts at road crossings that contribute to flooding and road damage, along with some small dams and tide gates. Minimizing these impacts across a major landscape will come with significant, lasting benefit to fish and people, now and into the future.

“Pelican Brewing Company is a valued leader in our effort to raise awareness and funding to protect salmon in Tillamook County—which impacts all of us at some level,” says Terry Turner, Oregon Council Chair, Trout Unlimited. “We hope Pelican’s creative funding strategy will encourage other companies and organizations to join this very important salmon habitat restoration effort.”

Pelican is participating as a sponsor and donor of this ambitious and unique community partnership to design and construct culvert replacement to create healthy upstream fish habitats, reduce chronic flooding, improve recreation opportunities and stimulate the local economy. Other partners include a broad range of state and federal agencies, local business and agriculture, and local watershed councils.  For a complete list of partners, please check the project website at:  http://www.salmonsuperhwy.org

“We know we are more than lucky to live and work in a place as beautiful as Tillamook County, and at Pelican we don’t take our environment for granted,” says Mary Jones, c0-founder and c0-owner of Pelican Brewing Company. “Pelican has long invested both time and money in programs designed to protect this beautiful area. Among other environmental and sustainability initiatives, we are proud to support the Salmon Superhighway and encourage the private business community to join us in this important endeavor.”

Born at the Beach
With consistent growth and demand for its products, Pelican recently increased brewing and bottling capacity at its Tillamook facility to over 38,000 barrels and opened a new brewpub in Cannon Beach which offers additional capacity for such experimentation.

Like all Pelican beers, Five Fin is born at the beach by a team of award-winning craft beer makers known for brewing styles of beer that they themselves love to drink. Cheers!