Earlier this summer, Pelican Brewing opened its fourth location, Pelican Brewing – Siletz Bay, along the Oregon Coast on the south end of Lincoln City. Now in a little over one week, the new location will host its Grand Opening and the tapping of its first in-house brewed beer, Doryman’s Dark Ale, that’ll take place on Friday, October 14, 2022.

The project that was announced in September 2019 is now open seven days a week and is brewing its own beer onsite. Led by Pelican R & D Brewer, Scott Mohr, this new facility is home to the relocated original 15-barrel brewhouse from its Pacific City location where Pelican Brewmaster Darron Welch began creating his award-winning beers over 26 years ago.

Pelican Brewing – Siletz Bay is an impressive building that was designed by the global award-winning hospitality design firm, EDG Design, and the architectural expertise of Portland-based Jones Architecture. It embodies a modern coastal design that embraces the beauty of the site and Pelican’s desire to serve up an extraordinary guest experience.

According to lead architect, Alan Jones of Jones Architecture, the new brewpub was conceived as a destination venue that draws upon and honors the traditions of the Oregon Coast, Siletz Bay and the Pelican brand. The design was inspired by the drama of the natural environment—the shifting tides, ever changing conditions, and the dramatic views of the driftwood covered beaches called for a design solution that maximizes the views and bay frontage.

Staying true to their beach roots, Pelican Brewing adds to its iconic collection of coastal brewpubs in Pacific City, Tillamook, and Cannon Beach with the new location on Siletz Bay. The brewpub interior, with 15,333 square feet, accommodates approximately 226 guests. Views of Siletz Bay and coastal wetlands are abundant from every angle as the floor-to-ceiling windows flood the expansive dining room with natural light. An upper mezzanine area provides even better views of the bay and is adjacent to new private group meeting or dining space.

Stepping outside the building will give way to an expansive 2,600 square foot outdoor patio that welcomes coast lovers with an ocean breeze and multiple seating options. The new location showcases the magnificence of this beautiful stretch of the Oregon Coast.

“We are honored that Pelican Brewing selected Lincoln City for their newest brewpub and we welcome them as a new attraction, an engine of economic development and a marketing partner,” says Ed Dreistadt, director, Explore Lincoln City. “We also are excited to experience the stunning view of Siletz Bay from their new location. Having such a well-established Oregon brand locate here is a big win for Lincoln City.”

Pelican Brewing—Siletz Bay location offers craft beers unique to that location in a casual and relaxing atmosphere that’s accented by the raw natural beauty and wildlife of the bay. The new brewpub delivers the same incomparable pub fare featuring locally sourced seafood and produce, and a number of innovative features found only at this new location such as the upcoming “Phil’s Nest Crab Boil Experience.” This special indoor/outdoor dining space, dubbed Phil’s Nest, is set to open later this month. This will be a one-of-a-kind crab boil experience for guests to enjoy while looking out on the views of the bay.

“We are incredibly excited to offer visitors to our Siletz Bay location a new seafood experience which we hope will cultivate connection to our beautiful coastal location ocean and create new memories for our customers,” says Mary Jones, co-founder and CEO of Pelican Brewing Company.

“We opened our dining room doors at Siletz Bay to the public this summer, and now that the brewery is operational, it is time to celebrate,” Mary explains. The first batch of beer brewed in Siletz Bay pays tribute to Pelican’s original opening celebration in 1996. Brewmaster Darron notes that the Doryman’s Dark Ale is not only one of the original beers that Pelican brewed for the opening day of the flagship Pacific City location in 1996, it is also Mary’s favorite beer. Darron says, “We want to brew Doryman’s not just for Mary, but for our loyal fans – it is an amazing beer with a meaningful history, including many awards and medals over the years. We are SO ready to begin pouring fresh brewed-in-house beer at Siletz Bay”. 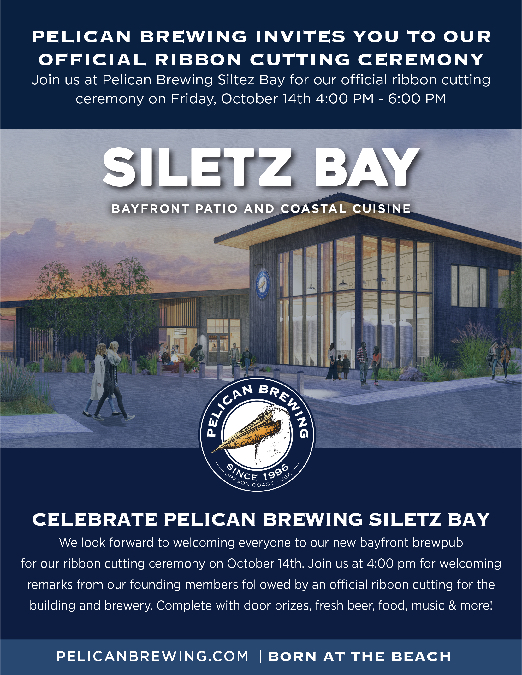 Pelican Brewing Company will be hosting a fun ribbon cutting celebration for its newest Siletz Bay location on Friday, October 14 at 4pm with a special ceremony and toast. The public is invited to enjoy Pelican beer and snacks, take a tour, and check out all of the features and amenities of this exciting new chapter.

Pelican Brewing – Siletz Bay is currently open daily from Noon – 10:00pm. The family friendly brewpub has both indoor and outdoor seating with views of Siletz Bay that makes for a perfect coastal sunset!