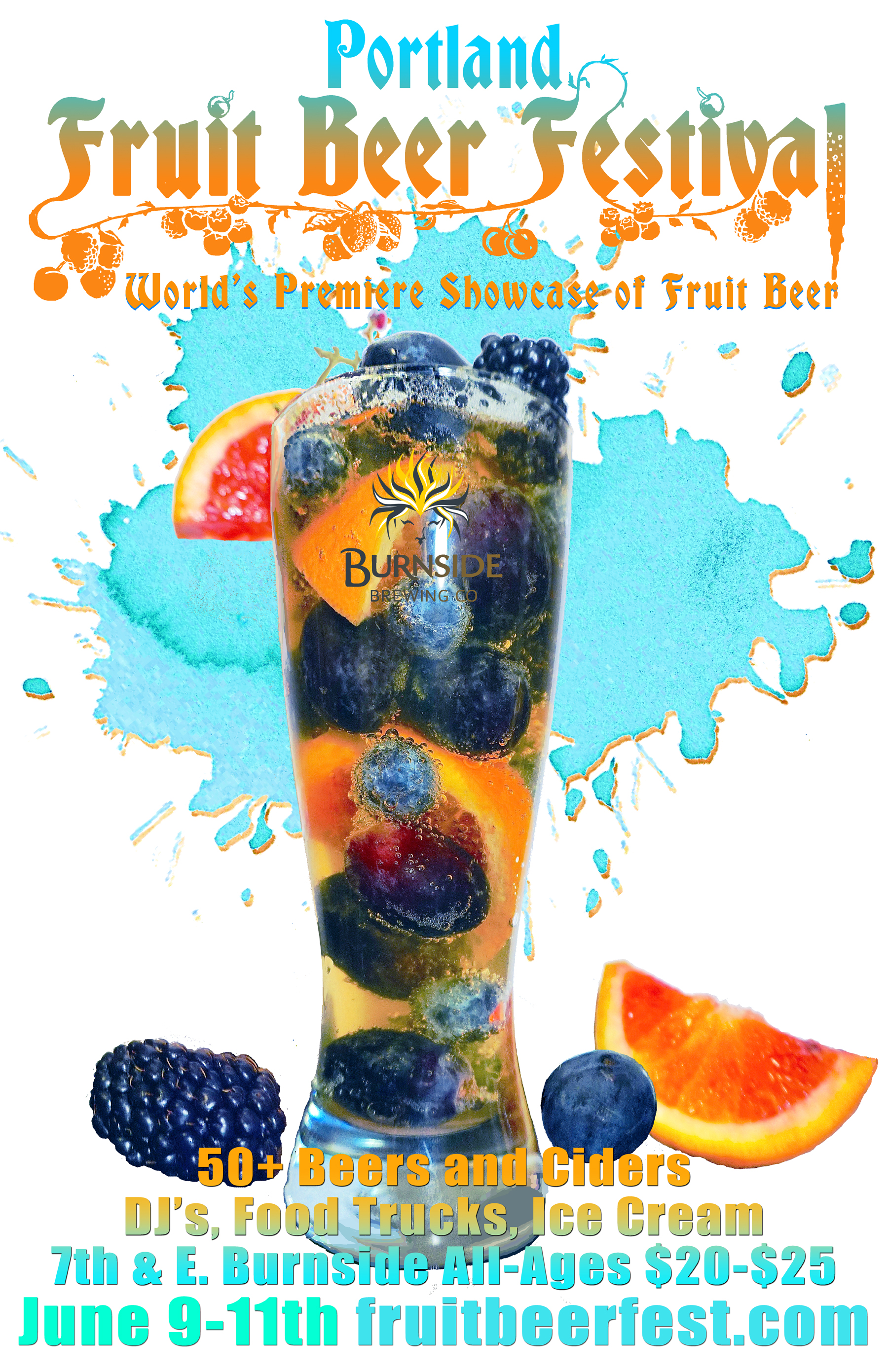 For the 7th edition of the Fruit Beer Fest look for beers from both coasts of the United States from Brooklyn, NY to San Diego, CA but with a strong emphasis on Pacific Northwest breweries. Brewers have selected a wide range of fruits and styles to please every palate, from tropical Pineapple, Mango, Passionfruit and Guava to berries like Boysenberry, Blackberry, Strawberry and even Elderberry. Guests will also enjoy a variety of American Wheat beers and sours, Tropical juicy IPA’s, dark and light Lagers, Barleywines and Belgian Pales.

This all-ages event will feature a partially tented outdoor event with music from various DJ’s. The fest also features local food vendors consisting of HOTLIPS Pizza, Urban German Grill and Fifty Licks Ice Cream. For those that are not drinking, underage or the designated driver, Burnside will offer a few alternatives. Grab a bite or a bottle of non-alcoholic Oregon fruit soda from HOTLIPS or swing into Burnside Brewing Company’s pub for a full food and drink menu.

Buoy Beer: Foraged for Thought – North Coast Gruit
Brewed in absence of hops, and inspired by the terroir of our region. Brewed with freshly foraged Spruce Tips, Douglas Fir Tips, and Woodsorrel (or sour grass) along with local Knappa honey.  Conditioned atop Cranberries from Starvation Alley Cranberry farms along with Rose hips, fresh citrus zest and un-cracked Coriander. 5.2% // 0 BU

Fort George Brewery: There Will Be Blood
7% ABV – Hazy IPA with blood oranges

Gigantic Brewing: Marionberry Tart
Made with Oregon grown Marionberries and kettle soured for a subtle tartness. 5.5%

Lompoc Brewing: Benny Appleseed
This apple, cinnamon sour mash was a collaboration with Ben Flerchinger. 120 pounds of Granny Smith apples and a pound of cinnamon were added to the kettle of this crimson colored ale. Fruity and dry with a slight tart twinge.  7.0% ABV

Ruse Brewing: Patchwork
This tart ale is kettle soured then conditioned with a touch of basil and a massive amount of local strawberries. 4.8%abv

Sunriver Brewing: Tiki Club
This version of the Tiki Club is based around a moderately hopped India Wheat Ale.  We combined a unique blend of real fruit (Mango, Pineapple and Lime) along with fruity Denali and Citra hops.  The overall impression is tropical, juicy and hoppy, with just a hint of tartness. 7% ABV, 40 IBU.

10 Barrel Brewing: Key Lime
A new conceptual beer that fuses cream ale with American sour and tropical fruit into a fruity milkshake of a beer, both creamy and refreshingly tart.

Upright Brewing: Kiwi Cocktail
Saison Vert is a year round wheat based beer that uses sun dried black limes in the kettle. This special version is a blend of one vermouth cask and one Old Tom gin cask that had kiwi puree added post fermentation. 5.2%

Reverend Nat’s Hard Cider: Whiskey barrel-aged POGPache
Tepache (native Mexican beverage made from only Pineapples, no apples) with Passion Orange and Guava added. A mere 3.5% and a perfect blender with wheat beer.

In addition to these beers and ciders there will also be other special one off tappings throughout the three-day festival.

Sat. June 10th 11am
Firestone Walker Brewing
Krieky Bones – What began as a birthday gift, took on a life of its own. Proprietor David Walker cornered us one day and requested a sour cherry fermented beer for his 50thbirthday. Done. A handful were sold at a Liberation, after which our loyal patrons demanded more. Voilà, Krieky Bones Batch #2! This beer begins its life as a Flanders Red style beer aged 24 months in a 2200 gallon French oak foeder. Sour Montmorency cherries are added and allowed a secondary fermentation. The aroma is of cherry pie complete with flavors of pie crust and spicy notes. Vienna malt notes give way to an assertive acidity, and a bright carbonation. A santé!
Barrel // Ratio // Maturation time
French oak // 100 % // 24 months

Bretta Rose – Thirty miles north of Barrelworks lies the fertile Santa Maria Valley. Its warm days and cool marine layer-fed evenings allow for a cornucopia of fruits and vegetables to be grown in its rich soil. One of Santa Maria’s crown jewels is locally grown raspberries. We jumped at the opportunity to ferment fresh local raspberries with one of our Barrelworks creations. Behold Bretta Rosé! A low-alcohol Berliner Weisse style ale, acidified and matured in French oak puncheons for 6 months, is the foundation for this gem. Add 1000 lbs. of fresh raspberries, allow a secondary wild fermentation for 4 more months and voila (!), we have a crisp effervescent concoction, bursting with raspberry perfume and flavor, a rosé color, bracing acidity, and a clean and refreshing finish.

Crux: Sour Golden Pinot Gris – Sour golden aged 1.5 years in L’ecole red wine barrels with mixed culture fermentation. Fresh Pinot Gris grapes crushed and added to barrels. 11.3% ABV, 20 IBUs
Crux: A Taste of Summer Saison w/ Peach – Inspired by the warmer weather and sunny days, we too our Farmhouse beer and added peaches to the fermentation. Hints of summer peaches and herbal notes play on the nose, along with subtle sweetness on the backend of the palate. 6.5% ABV, 25 IBU

Strawberry Shortcake – a tart ale made with Oregon strawberries. This is the strawberry version of our Zest Berliner Weisse series, the cousin to Blueberry Muffin and Key Lime Pie.

Also in the Rotation….

Ruse Brewing: Turquoise Mountain Sunrise
this golden ale was conditioned in pinot noir barrels for 8 months with our house brettanomyces culture, then transferred to stainless with pineapple puree. Tastes like a cocktail-hence the name!

The Portland Fruit Beer Festival is now seeking OLCC certified volunteers! For a few hours of your time volunteering to pour you receive free drink tickets, food, afterparty and fun! Please visit the website here to fill out a volunteer form.