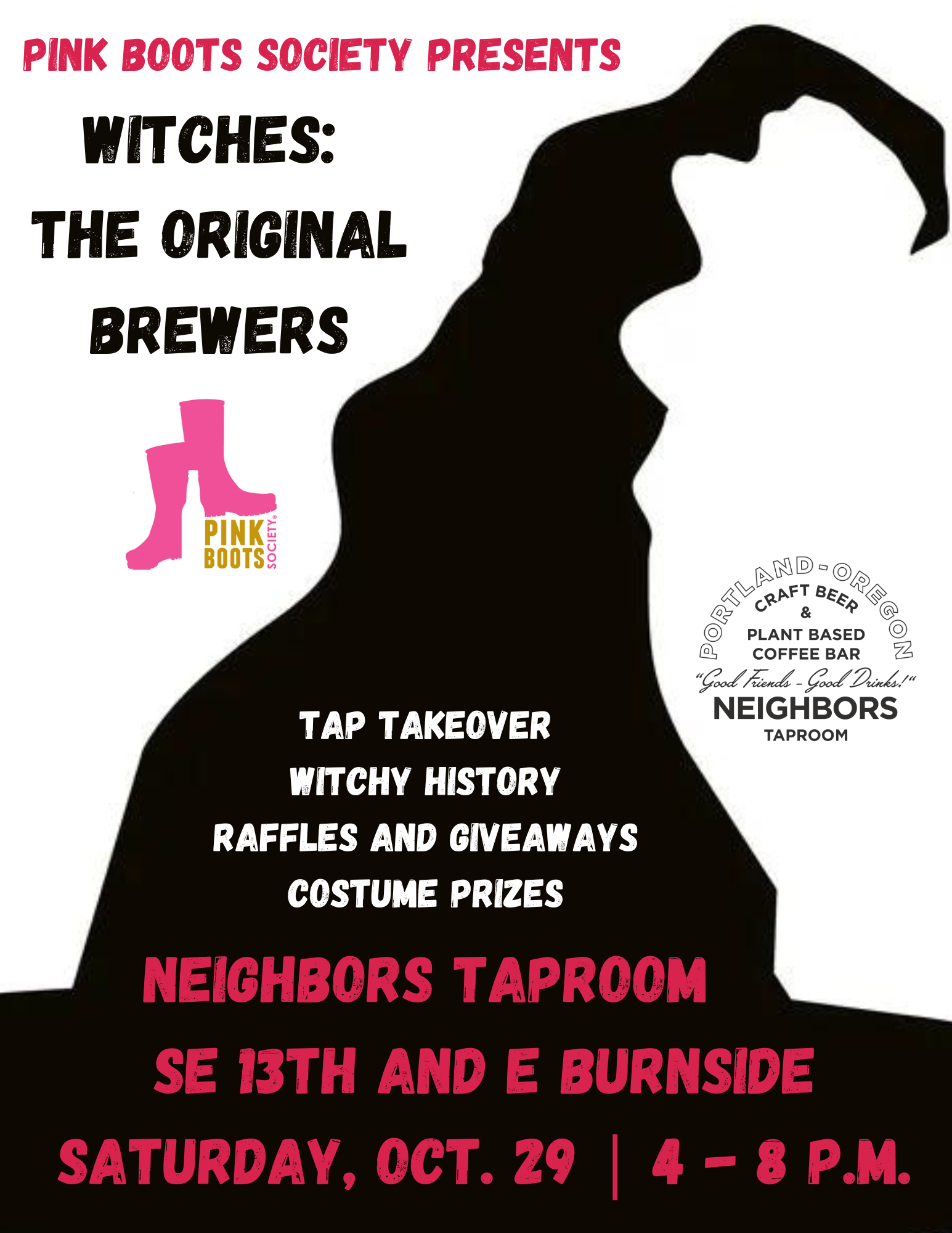 In time for Halloween, the Portland Pink Boots Society presents Witches: the Original Brewers. This self-described bewitching tap takeover will feature an evening of many of Portland’s women in beer.

Witches: the Original Brewers will take place on Saturday, October 29, from 4:00-8:00pm at Neighbors Taproom located at 1306 E Burnside St. in Portland, Oregon.

On Saturday, October 29, Portland’s women in beer invite you to join them for a bewitchingly good time at woman-owned and operated beer bar Neighbors on SE 13th and East Burnside. Over a dozen female-represented breweries will be on tap; costumes, witch or otherwise, are highly encouraged; raffles and giveaways throughout the night; plus spellbinding prizes for best costume. We’ll be joined by special guest Tiah Edmunson-Morton, Oregon Hops and Brewing Archivist at Oregon State University, who will deliver the lowdown on “Female Brewing and Witchcraft: it’s complicated.” The enchantment takes hold from 4 – 8 p.m. with a portion of proceeds supporting educational scholarships and advancement opportunities for Portland’s women in beer.

Pointy hats, broomsticks, black cats – is it a witch or just a 16th century female brewer? Although men have come to dominate today’s beer industry, brewing was widely considered women’s work up until the 1500s. Women, often poor or single, could earn a living by bringing their cauldrons of fermented grain-based beverages to the town square.

But with the onset of the Reformation in Europe and condemnation of witchcraft, female brewers and women in general became easy targets. Some historians claim an overt smear campaign at the time, painting women as witches in order to discredit their reputation and thwart any increased financial independence. And as Pink Boots Society official historian Tara Nurin has recorded, “Depictions of female brewers in art, literature, and pop culture swung negative. Although no one can prove a connection, some historians see clear similarities between brewsters and illustrations selected for anti-witch propaganda. Images of frothing cauldrons, broomsticks (to hang outside the door to indicate the availability of ale), cats (to chase away mice), and pointy hats (to be seen above the crowd in the marketplace) endure today.”

It took 5 long centuries but women today are finally back in the brew house and overseeing some seriously massive steel cauldrons. Portland’s Pink Boots Society chapter members are proud to own, brew for or represent more than 30 breweries across the city.

The Pink Boots Society was launched in 2008 to assist, inspire, and encourage women and/or non-binary individuals in the fermented and alcoholic beverage industry to advance their careers through education.