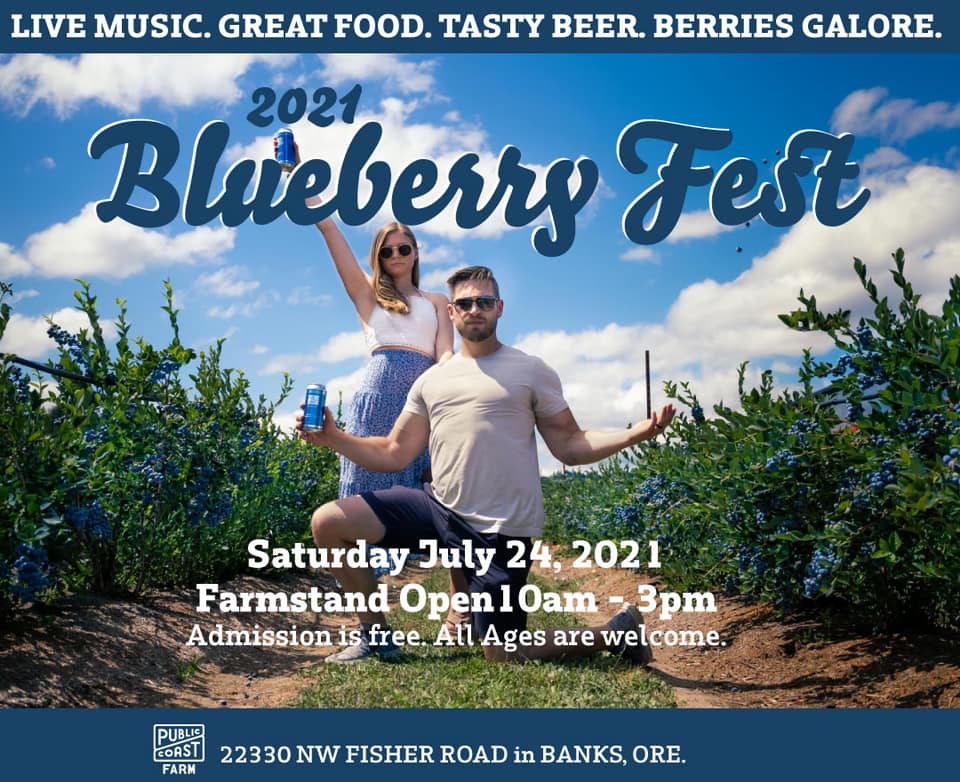 This past weekend, Public Coast Farm opened its gates to the public in Banks, Oregon. This offshoot project from Public Coast Brewing out of Cannon Beach, Oregon has been in the making for the past few years and it will host its official launch on Saturday, July 24th. The brewery will also celebrate its 5th Anniversary on Saturday at the farm.

The inaugural Public Coast Farm Blueberry Fest will take place on July 24th at the sprawling 40-acre farm from 10:00am – 3:00pm. This family friendly event will feature blueberry picking, fun run, live music from Floating Glass Balls beginning at Noon, and food from culinary chef turned Brewmaster Will Leroux. Entry to the Blueberry Fest is free!

While on the farm, just off the iconic Sunset Highway about 30 minutes from Portland, there you can shop from a wide array of produce. The culinary farm has 15-acres of blueberry bushes in season for your picking. If you don’t feel like picking you can choose from a few different sized containers of pre-picked blueberries.

In addition to the blueberries, Public Coast Farm also features fruit orchards, beehives and hops. The farm is described by Public Coast as a culinary playground that celebrates alchemy: the transformation of simple, beautiful, locally produced ingredients into culinary magic.

But it’s not all produce at the farm. Patrons can also purchase 4-packs of Public Coast Brewing beers and seltzers. Even a few of them feature ingredients from the farm. We recommend the Blueberry Wheat Ale and Blueberry Seltzer. Plus, grab a jar of its Blueberry Fruit Spread, its well worth it as it improves any PB&J!

There will also be a 5K family fun run/walk at 11:00am. In addition to course access, fun run/walk participants will receive a free ice cool Public Coast beer as part of the $30 entry fee. To register, visit: https://www.eventbrite.com/e/beer-run-public-coast-brewing-farms-2021-or-brewery-running-series-registration-147017135209.