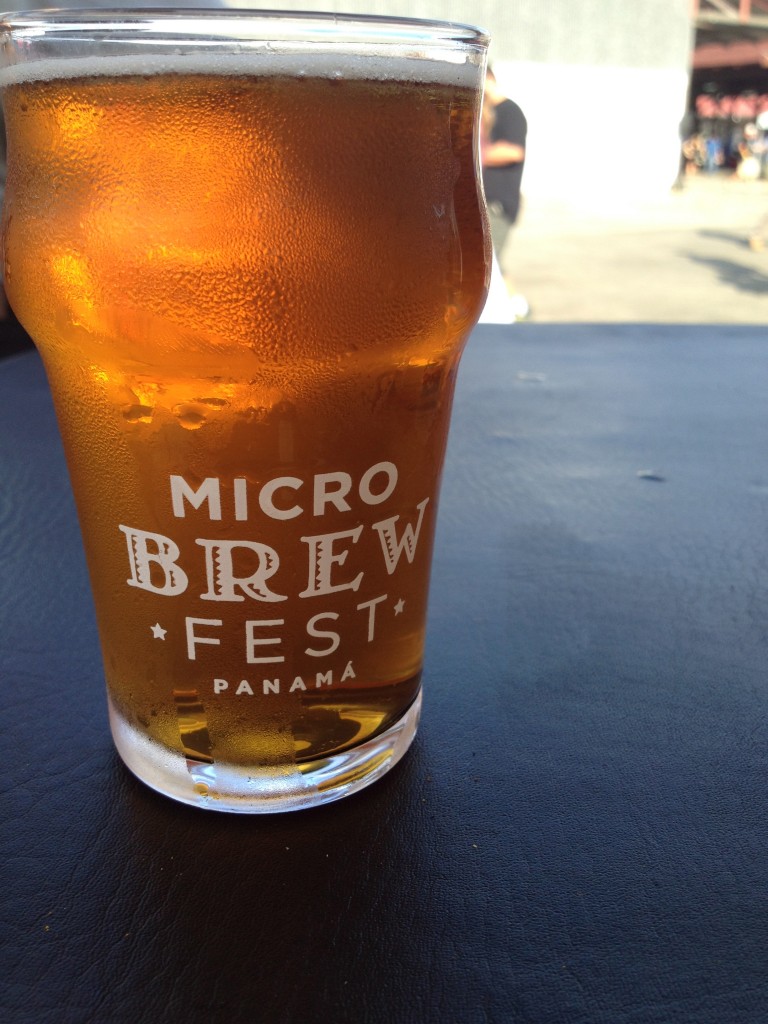 Despite what I thought when I first arrived in Panama back in June of 2013, the micro brew scene down here has had a fire lit under its belly and has taken off, not looking back. My first microbrewery I stumbled across in Panama was Rana Dorada. With two locations in Panama City and a killer happy hour of 2 pints for $5, this is where I spend most of my day drinking afternoons when taking a break from Bocas. The beer is always solid and consistent with a standard Porter, Blanche, Pale and Pils on tap and more often then not a seasonal special tap which has been more often then night a delightfully hoppy IPA, that could be at a bar anywhere on the west coast and no one would question it.

Bocas Brewery opened in May of this year, which quickly became my home away from home. It’s a great space on the beach owned by a cool couple from Colorado, and they carry house made taps, mostly German and English influenced. A standard Pale, Porter and Amber are always easy to find as well as a shanty made with a mix of their Amber with a house made ginger soda, its damn refreshing. They also carry taps from a brewery in Panama City named Casa Bruja, which since their discovery has been hands down my favorite brewery I have ever found outside the US and lead me to believe there is an underbelly of beer geeks in Panama that has yet to be explored.

Flash Forward to last week, when a few friends and I were asked to help at the Bocas Brewery Tent during the 3rd Annual Panama Microbrew Fest. Not only was this the epicenter of the most interesting, attractive and most like minded mix of people that I have met since I moved here in 2013, but it was full of delicious beer and food tents from places that I had no idea existed! Boasting standard micro brew accompaniment with a Panama twist, you could find fry bread sandwiches, fried plantains, bratwursts, and pretzels among other tasty treats which is all so important for maintaining your composure and a fest.

But the beer, OH THE BEER! The standout brewery of the night was Cervecería Legitima. They killed it with everything they brewed and ran out of kegs both nights. We went through their entire line-up, disappointed by none of them. My favorite was the Imperial Russian Stout, it was perfectly executed, not too boozy, heavy full flavored body, just enough roast to it. Their Pale ale was a close second, beautifully dry, great hop forward flavor, was perfect for a hot Panama day. The biggest bummer about this brewery is that there is no pub for me to frequent on a regular basis and their production is still small so it’s hard to find on tap anywhere. Rumor has it (by the brothers that own it) that a pub is in the works, lets hope that it happens before my Peace Corps contract ends.

Casa Bruja brought some seasonals that did not disappoint, which included a Rauchbier (one of my personal favorite styles that I feel is hard to come by, especially in Latin America) It reminded me so much of Heater Allen’s Smokey Bob (RIP Smokey Bob) which was one of my favorite fall beers. They also had a barrel aged a stout made in rum barrels which made for a lovely night cap and a delightfully malty hop forward Double IPA.

Rana Dorada, the most popular in Panama City, brought some new beers too, including a black ipa, a coffee porter (that was amazing) and a saison that was light, refreshing and had that great cardamom flavor as a good saison should (in my opinion) .

Bocas Brewery came with our standard lineup, accompanied by water guns and three Peace Corps Volunteers (including me) that couldn’t have been more excited to learn about the microbrew scene and to not be out in the jungle for a few days. We were a big hit, selling through both our Shanty and Pale Ale after the first night. This was our first fest, and we now know that if we bring more kegs, they will sell.

Among other breweries were Quinta Esencia and Cervezaría Insurgente from Mexico, Founders, Ballast Point, Mission, Anderson Valley and some European imports brought in by some local beer cafes and distributors. Brew Stop is a beer café that is popular in Panama City, that seems to have a solid line up always, a good selection of all the latest imports made available and always has special release kegs and bottles from Casa Bruja and Rana Dorado. The week before the fest there was a tap take over from Cervecería Legitíma, I am hoping that means it will be a consistent place to find their beers in the near future.

It was lovely meeting like minded beer geeks like myself in a place so far from home. The brewer at Rana Dorado is a long time beer industry guy named Brad Kraus who helped start up Bogota Brewery in Colombia and also has been a judge at GABF for many years running. It was nice to run into someone who knew so many of the people who I know and love from the northwest beer scene.

Being from the NW I am naturally a sucker for a nice beer drinking man with a groomed beard and glasses and lucky for me, I found just that, a cute Costa Rican man and his film crew. As part of their beer magazine titled Beer n Roll they were at the fest interviewing the brewers in Panama to give a full report back to a newly budding Costa Rican beer scene on their You Tube channel under the same name. Maybe I will have to make a trip up there soon to see what that’s all about. They can be found on Facebook and are in the process of remaking their webpage. Keep your eye out if you are ever in Costa Rica and are looking for a good source for all that is happening in beer.

As I am finally coming down from what was without a doubt one of the best things I have done during my time in Panama, I am realizing the comfort that the beer community provides me. Even far from home, it still attracts amazing people, from all walks of life, who just want to sit down and share a pint. Vivá la revolución! Here’s to Panama, I can’t wait to see what next years fest brings.