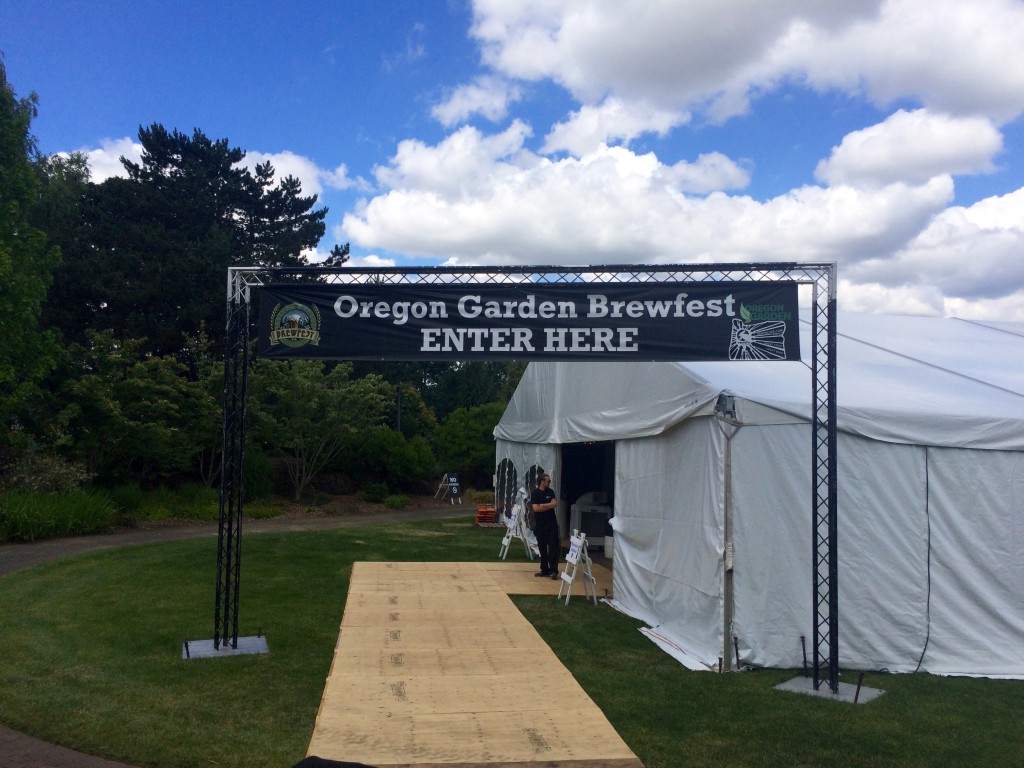 Last weekend’s 11th Annual Oregon Garden Brewfest (OGBF) was a large success as it moved its dates from late April to mid June to help celebrate Father’s Day Weekend. Over 8,200 craft beer fans attended the festival this year. That’s an increase of over 700 attendees that swung by to take in the beautiful Oregon Garden and sample from the 136 offerings for beer, cider and mead.

“We changed the festival date from its traditional late April weekend to Father’s Day this year to take advantage of nicer weather and showcase the Garden in bloom,” explained Mary Ridderbusch-Shearer, event manager. “The move was welcomed by many, who liked seeing the Garden in a warmer setting and enjoyed the chance to spend some quality time with the fathers in their life. What Dad wouldn’t want to go to a beer festival on Father’s Day?”

The Oregon Garden Brewfest weekend kicked off on the eve of the fest with the 4th Annual Brewer’s Tasting Dinner. Once again held on the Thursday evening, the dinner featured six courses all paired with a beer from a different brewery. The room was full of brewers and brewery representatives all sitting amongst many craft beer and food aficionados. Prior to each course being served a person from the brewery of the beer being served spoke briefly about their beer. The Brewer’s Dinner is definitely a great way to kick off the OGBF weekend.

When the OGBF officially opened its doors at Noon on Friday attendees had choices from any of the plentiful 136 offerings. The OGBF does an excellent job at attracting many diverse breweries to its lineup, many that are not normally scene around the Portland craft beer circuit. However as costs to run festivals continues to increase sometimes these increases are well hidden. One these cost cutting savings that was noticed at this year’s OGBF is that the sample size for one ticket had decreased to only a 2oz pour.

Throughout the weekend attendees were able to explore the 80 acres of botanical gardens with drinks in hand. There was even a beer station out within the gardens that served up a rotating selection of pints to quench one’s thirst. Since Sunday was Father’s Day, this was a family day at the OGBF. Many children took advantage of the complimentary craft: making their Dad a wooden coaster burnished with the Oregon Garden logo. Others played games in the sun, including shuffleboard, skee-ball and foosball, all set up in the Garden.

As in year’s past OGBF attendees had the opportunity to vote for the best beer at the fest. The People’s Choice, determined by votes cast at the festival, was from Salem Ale Works for its Hootenanny Honey Basil. This is a pale blond ale with a balanced addition of fresh basil and honey. This was a big coup for Salem Ale Works as they took over the title from its near by neighbor, Santiam Brewing that won the People’s Choice the past two consecutive years with its Pirate Stout.

The 12th Annual Oregon Garden Brewfest will return for Father’s Day Weekend once again and will take place from June 17 through 19, 2016. To stay informed, visit www.oregongarden.org/events/brewfest/