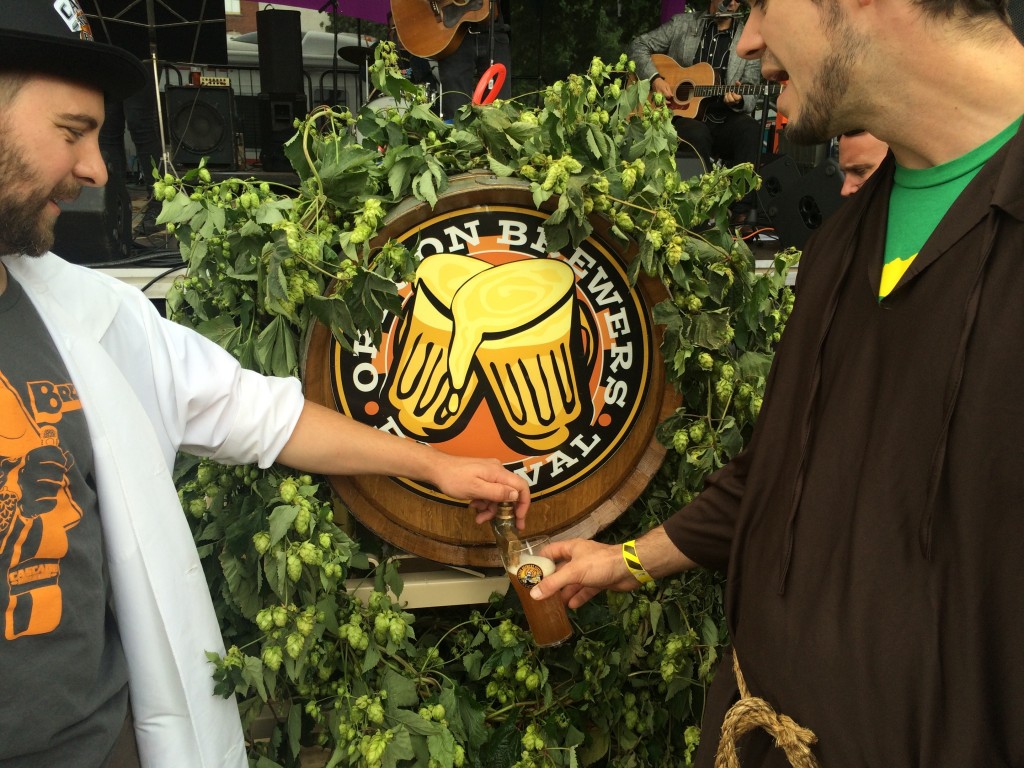 Pleasant overcast skies greeted craft beer fans yesterday when the 28th Annual Oregon Brewers Festival kicked off at Noon. However the festival truly go under way with its annual Oregon Brewers Festival Parade hosted by Lompoc Brewing at Metal Craft. Plus the originators of the OBF Parade were at it once again when Rogue Ales hosted its own parade originating from its Public House in the Pearl District.

Once both parades converged the now larger group made its way into the festival grounds at Tom McCall Waterfront Park. This is when OBF founder Art Larrance made his way to the stage to formally kick of the 28th OBF. Here he announced a check for $15,000 was made out to the Community Transitional School, this year’s OBF charity.

Larrance then went into what to expect in 2016. Next year OBF will be inviting brewers from Japan to attend the 29th Annual festival. Larrance also stated that brewers from the Netherlands and New Zealand will also be invited to begin to make OBF a truly international beer festival. This is some great news!

Then this year’s OBF Brunch host brewery, Lompoc Brewing, announced Laurelwood Brewing will host next year’s brunch. This will be a long parade if it begins at its brewery in the Hollywood area of Portland. As with this year it will most likely be held at a closer venue that Laurelwood has a connection to.

The setup at OBF is similar to that of other years except for the table arrangements inside each of the two large tents. Organizers relocated the long tables from under the tents to outside of the tents along the fence that borders the Willamette River. In its place are now tall bar tables that make for a much better festival experience. This allows more easy movement getting in and our of the tents.

Now on to the beers at the 2015 OBF. This year’s festival features 89 beers pouring from the United States and one from Canada. Fifteen additional beers from the Netherlands and New Zealand accent this. However, on Wednesday only 11 of these 15 international beers were pouring which is a great way in OBF’s marketing to entice its patrons to return. This will work for us as we plan on returning the the fest on a few more occasions.

When one breaks down the 90 regular OBF offerings there are beers that are truly unique to the festival and others that are part of the brewery’s year round or seasonal lineup. OBF is a respected festival and deserves the beers submitted by breweries to either be rare or brewed just for OBF itself. When so many breweries would welcome its involvement in this fest it is not too much to ask for.

This year a few Brewpublicans did their “job” tasting their way through all of the beers that are unique to this year’s OBF. Beginning at Trailer 1 and working our way to Trailer 10 we did our service to you on recommending the beers one should DRINK and beers that we recommend to AVOID. Of course this is all based on personal taste, some may say we have a good palate while others may question it. Plus as the day progressed our palates too suffered from a bit of fatigue but all in the group were part of a consensus in the evaluation. If a beer has a over it this means that the beer is readily available in the marketplace. Here are our results beginning at Trailer 1 and ending at Trailer 10.

OBF continues through Sunday, July 26, opening each day at Noon and closing at 9:00pm except for Sunday when the festival closes at 7:00pm. Token and glass sales close one-half hour prior to the taps shutting off (8:30pm daily, except 6:30pm Sunday). Be sure & use the mobile guide at http://www.coaster.me  – sort by trailer, color, ABV and IBU. Plus it track the beers you like!

Check our our photo recap of Day 1 at the Oregon Brewers Festival below.