The 2016 Beer Camp Across America mixed 12 pack and its draft offerings are now rolling out into the marketplace. It was nearly two years ago when Sierra Nevada Brewing took on a huge, ambitious project called Beer Camp Across America (BCAA) where the then Chico based brewery collaborated with 12 other highly regarded breweries from across the US and brewed beers for a mixed 12-pack. To make this project even more exciting Sierra Nevada took to the road and traveled across this great land of ours and hosted BCAA beer festivals in all regions of the country.

Now with the recent opening of Sierra Nevada’s new brewery in Mills River, NC the brewery is taking on this challenge once again by bringing on 30 new breweries plus Sierra Nevada itself to bring the total to 31 participating breweries. These breweries hail from 6 regions of the country to do 6 collaboration beers with that will end up in a 2016 edition 12-pack of BCAA.

“We created Beer Camp Across America to be a true national celebration of craft beer,” said Sierra Nevada Founder and President, Ken Grossman in a news release. “As part of that, we brought our fellow brewers and friends who share our passion, admiration and bold approach to pushing brewing boundaries along for the ride.” 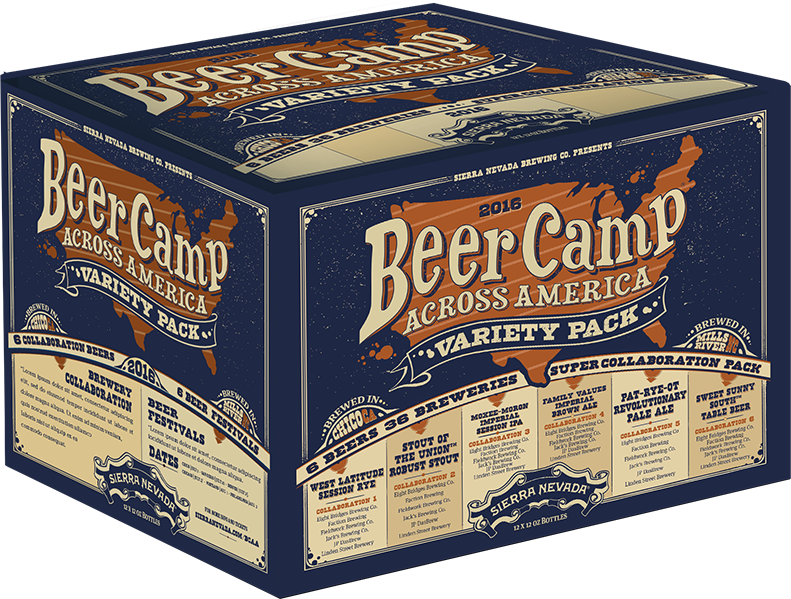 “Leveraging decades of experience, these celebrated beer pioneers tinkered with flavors, explored native and exotic ingredients and poured heart and soul into the process,” said Sierra Nevada Vice President, Brian Grossman in a news release. “Camaraderie resulted in truly exceptional brews. We’re all looking forward to sharing these beers with our fans and celebrating these collaborations at festivals across the country this summer.”

BCAA, the largest celebration of craft beer returns next month in June 2016 with a six-city trip across the United States. Once again Sierra Nevada is inviting every brewery from across the United States to pour at its respective regions BCAA stop. Sierra Nevada will take the beers on the road this June via a six-city tasting festival tour hitting Tampa, Fla.; Seattle, Wash.; Milwaukee, Wis.; San Francisco, Calif.; Boston, Mass.; and Los Angeles, Calif. More details on each stop are listed with each beer description.

On Saturday, May 14, from 1:00 to 2:00pm, Sierra Nevada Beer Camp Across America Live-Stream Event will take place at Total Wine & More locally at its Vancouver, Washington location at 4816 NE Thurston Way. For the $10 entry fee that can be purchased here, participants will be able to learn more about BCAA from Sierra Nevada brewers Terence Sullivan and Steve Dresler. The two will discuss their collaborations with 31 fellow brewers to create six regionally-themed beers for the 2016 Beer Camp Across America. Participants in the live-stream event can send questions to the brewers via social media, learn about their collaborations and purchase the unique and sought-after Beer Camp Across America Variety Pack. Use #TWMLIVE to submit questions via Total Wine & More’s social media channels.

Here’s a peak at what to expect for each beer from each region along with each of the 31 breweries that are involved with each beer.

Every craft brewer in the nation is invited to pour at the festivals, with the lineup already including more than 500 different breweries from across the country. Proceeds will be donated to local brewers’ guilds and other nonprofits to encourage continued hops research and help ensure a supportive future for craft brewers across the nation.