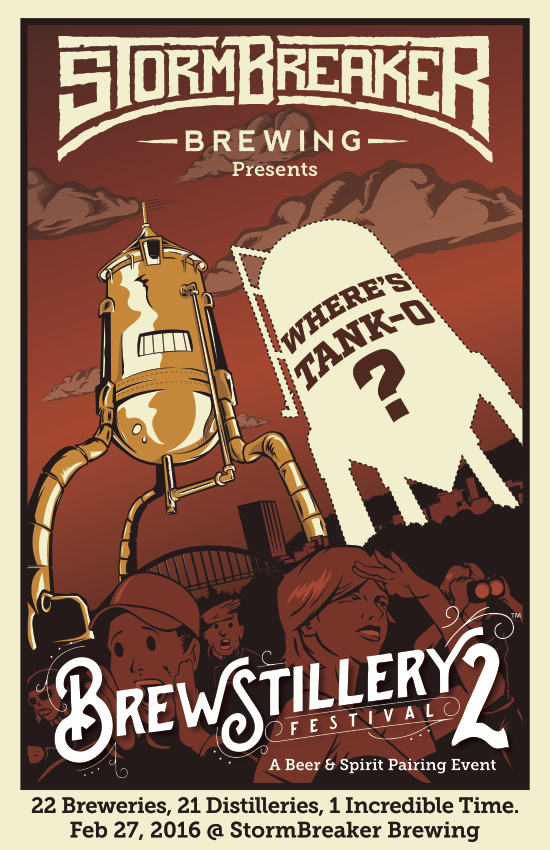 The process of distilling spirits and brewing beer hold many similarities. Both use the process of mashing grains to get the desired final desired beverage. On Saturday, February 27, from Noon to 8:00pm, craft beers will be paired with craft spirits at the 2nd Annual Brewstillery Festival at StormBreaker Brewing.

After this past year’s very successful first run, the second edition of Brewstillery Festival will be larger, both in the amount of pairing and the physical size of the event. If you attended the festival last year you were not alone as the crowd was quite large. This year StormBreaker is taking over the Beech. Yes, Beech Street between Mississippi Avenue and Albina will be closed off for the day with large tents to allow for a more comfortable atmosphere. With this additional space the amount of pairings has increased to a massive 27 pairings from 23 breweries and 22 distilleries. Plus look for The Whiskey Achievers jamming throughout the festival.

Last week StormBreaker Brewing hosted a preview and sampled eight of the pairings for the 2016 Brewstillery Festival. And all eight pairings were each worthy of accolades. Here’s a brief rundown on the eight.

One of the top pairings of the evening came from Fat Head’s Brewery and Big Bottom Distilling with the catchy named Fat Bottom Big Heads pairing. This paring uses Fat Head’s Heads or Tails Sour Saison and Big Bottom’s Barrel Aged Gin. The distillers shared the botanicals used to make the gin with the brewers at Fat Head’s that truly enhanced its sour saison. Fat Head’s brewer, Mark Poffenberger called this a, “Nice summer cocktail.” We would tend to agree. The beer botanical enhanced Heads or Tails Sour Saison would be the perfect summer beer. Lets just hope that this beer is revisited for our warmer months ahead.

The Commons Brewery teamed up with Stone Barn Brandyworks for Nuts and Spice a pairing that enlists pumpernickel bread from Little T Baker. When brewing Commons Pumpernickel Rye Saison, the brewers at The Commons soak loaves of this bread in the mash tun for 12 hours prior to brewing this beer that is inspired by an old Scandinavian beer. The sweetness from Stone Barn’s Nocino Brandy makes this pairing stand tall. “This pairing pops,” stated Josh Grgas from The Commons and we tend to agree!

Two pairings from the festival come from Breakside Brewery and Thomas & Sons Distillery. Rosy Cheeks pairs Breakside’s Belly Laugh Classic Saison w/ Spice and Thomas & Sons Townshend’s White Rose to offer one of the top pairings of the evening. White tea and rose petals make up White Rose and its intriguing result in this twice distilled spirit. This paired with the slightly spiced beer from Breakside makes for a pairing to seek out.

The duos other pairing is Mitten Slap, one that pairs Breakside’s Safe Word Triple IPA and Townshend’s Bluebird, a liquor modeled after once from Central Europe. The plethora of aromatic herbs and spices from Bluebird meld well with the citrusy aspects from Safe Work Triple IPA.

The host’s festival also has two featured pairings with two different distillers. The Siberian Bull pairs StormBreaker’s Barrel Aged Fall of the Iron Curtain with Bull Run Distilling’s Temperance Trader American Whiskey. Named after Ivan Drago character played by Dolph Lundgren in Rocky IV, The Siberian Bull is one of the bigger pairings with a barrel-aged Porter and 82 proof whiskey will warm one up. “The whiskey adds a nice smooth finish,” states Rob Lutz, festival co-founder.

StormBreaker’s other pairing, Back to Your Roots, is with its Biff & Griff Dry Hop Wit paired with Wild Roots Marionberry Vodka. Brewed for its Back To The Future trilogy of beers, Biff & Griff Dry Hop Wit, it is recommended to listen and follow the suggested idea of blending the two drinks to come up with on fine fruity beer cocktail.

Migration Brewing and House Spirits team up for the pairing Frank the Tank. Barrel Aged Frankie Claus and Westward Single Malt Whiskey make for a big pairing. The big barrel-aged beer and the 90 Proof whiskey don’t leave much off the table. This pairing will not hide from you when you combine two big beverages in their own right.

For the 2016 Brewstillery Festival expect the following pairings.

Here are links to view the complete listing of 2016 Brewstillery Festival pairings with descriptions: Page 1 and Page 2

And here is the link to the Official Brewstillery Festival Program.

Advance tickets are currently on sale by clicking here. General Admission is $25 and includes festival beer tasting glass and 10 tickets. These advance tickets are on sale online until 9:00pm on Friday, February 26. At the door General Admission tickets will increase to $30. VIP is $50 and includes festival Glencairn whiskey glass, festival beer tasting glass, 20 tickets, and access to VIP area at Noon during the first hour of the festival to get first crack at select pairings. A portion of event’s proceeds will go to StormBreaker’s neighbor, The Rebuilding Center.