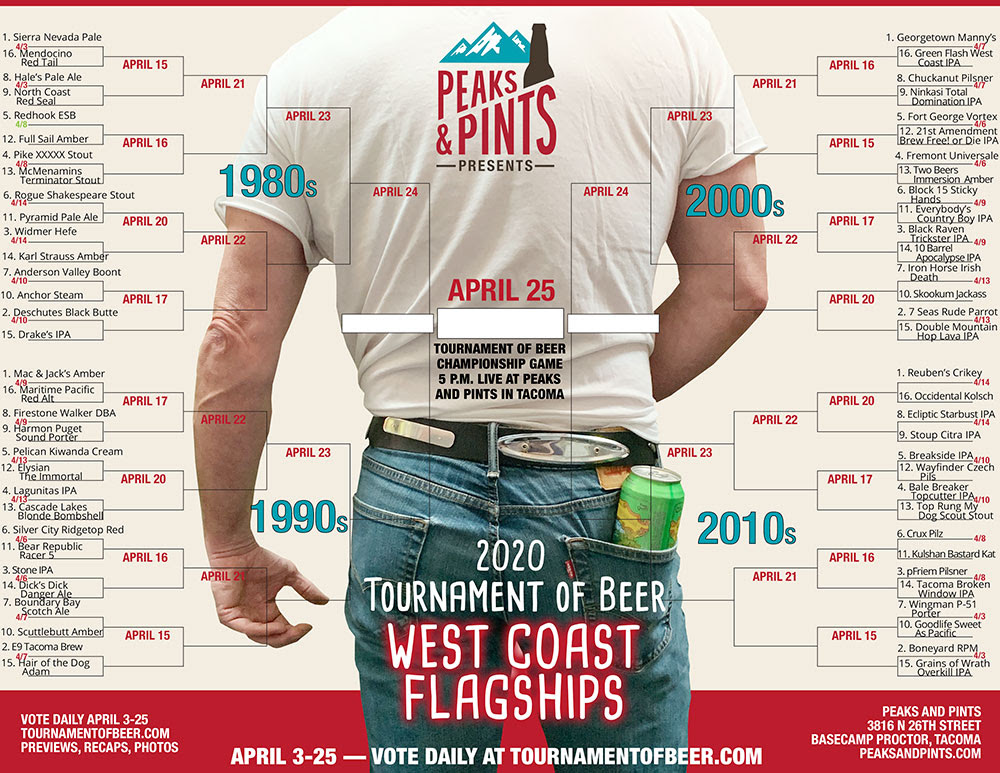 Normally we’d be in the midst of the NCAA Basketball Tournament but with the world’s Coronavirus/COVID-19 pandemic, this year’s tournament has been put on hold and was cancelled. But this international emergency will not prevent Tacoma’s Peaks and Pints from hosting its 4th Annual Tournament of Beer throughout the month of April.

This annual bracketed 64-beer competition pits West Coast flagship beers against one another in fun, competitive head-to-head match-ups voted on by craft beer enthusiasts such as yourself. Though the tournament ultimately crowns a champion a la NCAA March Madness style, the real purpose is to champion the beers that put West Coast breweries on the map, which might have become forgotten in a sea of hazy milkshake IPAs and pastry stouts.

Taking place from April 3 – 25, 2020, Peaks and Pints has unveiled the official bracket for its Tournament of Beer: West Coast Flagships, a voter-based public tournament seeking to crown the best West Coast flagship beer from the last four decades. Similar to the NCAA Division I Men’s Basketball Tournament, the Tournament of Beer features 64 flagships from Washington, Oregon and California, all seeded by public vote, and separated into four decade regions: 1980s, 1990s, 200s and 2010s with one flagship beer per brewery.

These top 64 vote getters — the cream of the dream — will compete Monday through Friday at tournamentofbeer.com, April 3-25. Through online voting, West Coast flagship beer drinkers will pick daily winners until the best flagship is crowned. It’s just like March Madness, only with delicious, craft beer.

The Tournament of Beer: West Coast flagships grand champion will be announced at the Tournament of Beer Party, April 25, at Peaks and Pints in Tacoma, quarantine permitting. The final two flagships will battle live pouring from the bottle shop, taproom and restaurant’s Western red cedar tap log with the champion brewery receiving a permanent handle through the spring and summer 2020.

Peaks and Pints is located atop of Procter Peak in Tacoma, WA. Its normal operating hours are 11:00am – 11:00pm Sunday – Thursday and 11:00am – Midnight on Friday and Saturday.