PDX Beer Week
Thursday June 7- Sunday June 17
So many events. So many beers. So much info. And it’s all available here
Remember that Loyal Legion — 710 SE Sixth Ave. — is the physical homebase for PDX Beer Week this year.

Seinfeld Trivia
7-9 pm Thursday June 7, Chill N Fill, 5215 N Lombard St.;
Billed as the Quiz About Nothing, Seinfeld Trivia is a special edition of Free Team Trivia and will be hosted by Rain Brain Trivia. Form a team of 1-6 with the winning team receiving a little Seinfeld Swag.

Silver Moon F* Cancer IPA Release
5-8 pm Friday June 8, Belmont Station, 4500 SE Stark St.;
A fundraiser for the American Cancer Society — the Station crew will be pouring Silver Moon’s new F*ck Cancer IPA on tap and there’ll be lots of the bottles for sale in the bottle shop to take home. Proceeds from each case and keg go to the American Cancer Society to help find a cure.

BeerWeek dinner with Firestone Walker’s Matt Brynildson
6:30 – 10 pm Monday June 11, Hair of the Dog Brewery & Tasting Room, 61 SE Yamhill St.; $85 inclusive, tickets at the brewery
Come meet Brewmaster Matthew Brynildson and celebrate BeerWeek with the Alan Sprints and the Hair of the Dog crew. The dinner will feature seven courses paired with ten beers including special beers from Firestone Walker and Hair of the Dog, one of which will be a soba (buckwheat) version of HOTD’s PDX BeerWeek Strong Steam beer, which is brewed with pilsner yeast and fermented at ale temperatures. After attending a soba noodle festival in Japan a couple of years ago, Sprints was determined to make a soba beer and this version uses soba that was cooked before being added to the kettle… 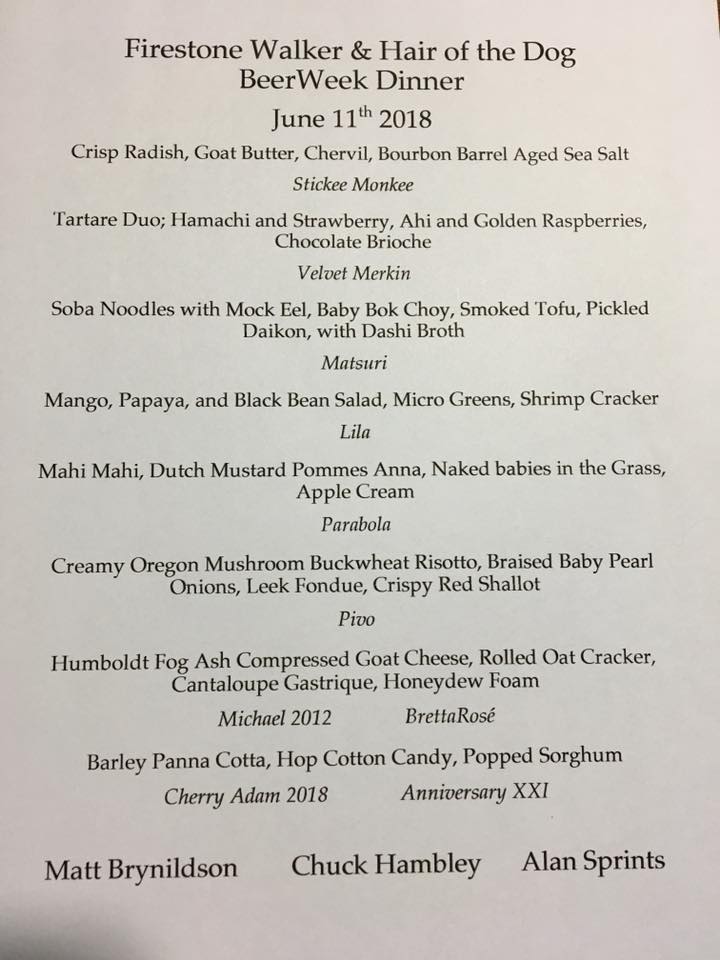