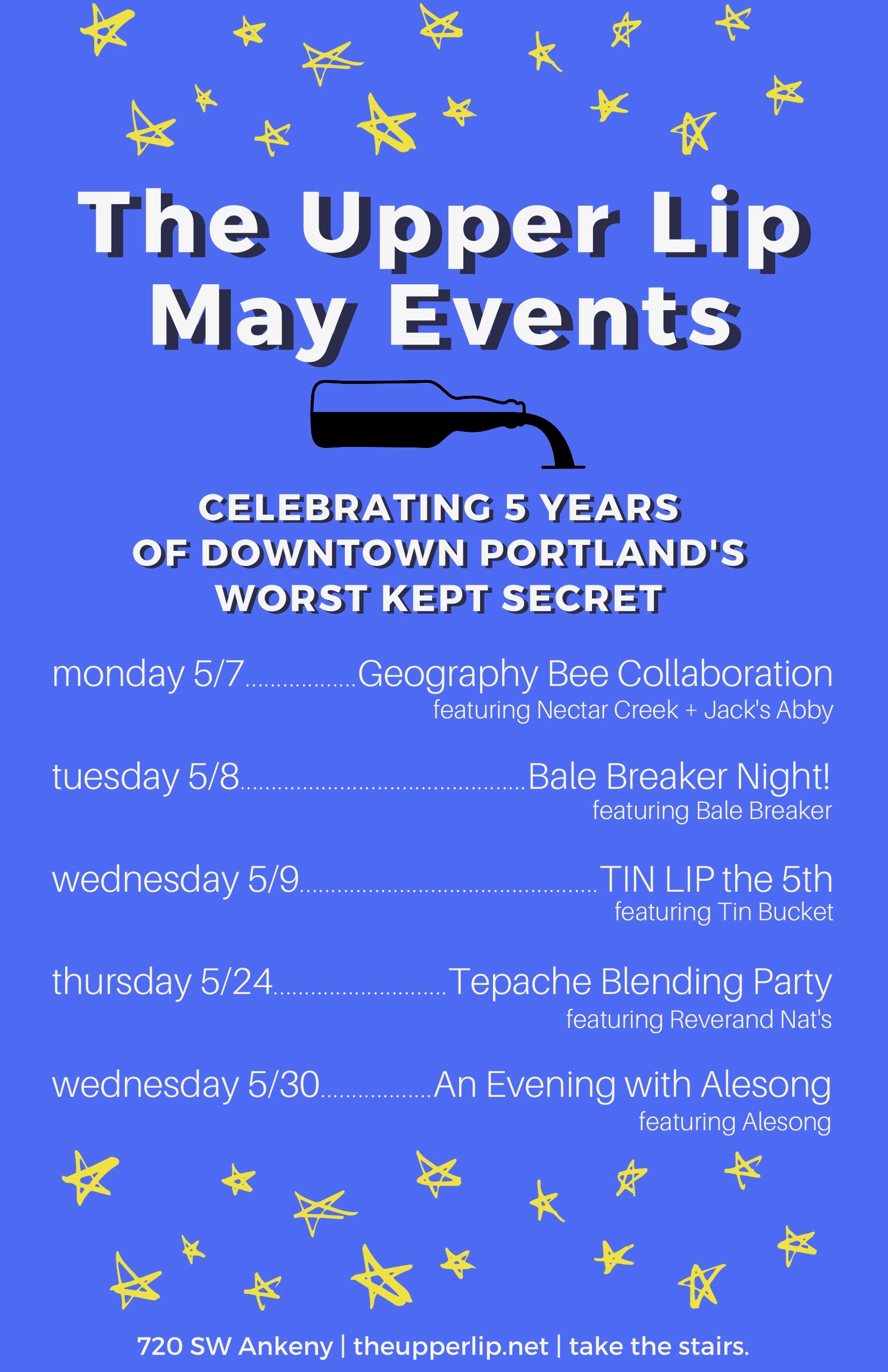 What was once know for being the home of the 24 Hours Church of Elvis, the second floor above Bailey’s Taproom has made a name for itself as a true beer destination. The Upper Lip celebrates five years throughout the month of May with five fun events. These events include Geography Bee Collaboration Party, Bale Breaker Night, TINLIP, Reverend Nat’s Tepache Blending Party, and An Evening with Alesong.

Prior to this month’s celebration The Upper Lip has gone through a slight, yet minor remodel. Most notably it has expanded its tap selection from six to ten rotating offerings, expanded its bar seating and launched a new seminar series this past March with The Upper Lip Beer Symposium.

Here are more details from The Upper Lip’s press release…

The Bar With No Name.
Well, that’s how it was supposed to go down. Five years ago, Bailey’s Taproom owner, Geoff Phillips, acquired the space above his downtown taproom. Serving first as a sort of employee rec room, it wasn’t long before the space morphed into a beer lounge.

Albeit only operating occasionally for special events and takeovers, the idea was to never give the “upstairs bar” regular hours. Opting instead for a bat signal style “open sign” on the main bar’s then-new Digital Pour dashboard, a picture of a bottle pouring into the iconic Bailey’s Taproom snifter logo meant the secret upstairs bar was open.

With a tight focus on vintage, on-premise-only bottles,  international brands, & “whales”, the space started to build a cult following of long-time regulars and beer nerds looking for a quiet place to talk shop about craft beer.

As time went on, the bar opened more frequently and a name, which started as an inside joke between staff members, jokingly stuck. “The Upper Lip” was our attempt at folding in some of the space’s history into a name. Once upon a time, this second-story room was home to the legendary Old-Portland staple, The 24 Hour Church of Elvis. The King’s signature, curled upper lip sneer combined with the fact the bar was literally up a flight of stairs seemed sufficient enough criteria to codename the space “The Upper Lip”. But, it didn’t matter what we called it because the intention was to never have a sign or advertise its existence.

That is until someone let the cat out of the bag. A couple positive reviews in the local alt-weeklies and the bar (and it’s silly name) caught on pretty quickly. We’ve been making minor tweaks to the space ever since and finally feel like it’s time to celebrate the bar as it’s become an entity entirely of its own. It’s joked that there are now patrons of The Upper Lip that ask bartenders if they’ve ever heard of “some beer bar downstairs”.

May Events at The Upper Lip

Monday 5/7 – Geography Bee Collaboration Party
Nectar Creek + Jack’s Abby Springdale project collaborated on a honey Saison trio. One will feature honey from Oregon, another will feature honey from Massachusetts, and the third is a Cuvee blend of them both. We’ll round out the draft list with some extra goodies from each Nectar Creek’s Mead and Jack’s Abby/Springdale creations!
https://www.facebook.com/events/166640430664264/

Wednesday 5/9 – TIN LIP 5
The return of the wildly popular collaboration party. This year, The Upper Lip joins the anniversary party, also celebrating its 5th year. Always a killer list, never a bad time! From Tin Bucket: “Its been 5 years (!) and we will be starting off our anniversary week the only way we know how, partying with our friends over at The Upper Lip! Everyone is invited and who knows what we will get into this year?! Tin Bucket will be closed this day.”
https://www.facebook.com/events/2277595625800679/

Thursday 5/24 – Tepache Blending Party with Reverend Nat’s
A draft list designed to blend with Reverend Nat’s Tepache Pineapple Cider. We’ll have bottles of Tepache and sample trays available for patrons to whip up their wackiest creations!

Wednesday 5/30 – An Evening with Alesong
The crew at Alesong thought it’d be nice to save their Portland club members a drive and have a local spot in the city to pick up their bounty. And since they’ll be in town with bar full of obvious Alesong fans, we thought it’d be cool to invite the rest of you to try some of their new releases, too! Expect limited food pairings and a chance to chat with the Brewing & Blending team.
https://www.facebook.com/events/139430640244376/