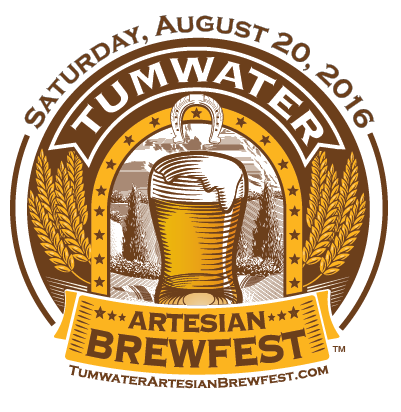 The brewing heritage in Tumwater, Washington dates back over 100 years. Olympia Brewing, originally known as The Capital Brewing began its operations in 1896 and later took on the name Olympia Brewing. Now the brewery has sat vacant for many years while the craft beer scene has taken off in and around the Olympia area.

On Saturday, August 20, the Tumwater Artesian Brewfest will take place from 1:00pm to 8:00pm for those 21 years of age or older at the Tumwater Valley Driving Range. Only a short distance from the Olympia Brewing facility, the festival will feature over 45 craft breweries along with a few wines, ciders and one distillery spread across the 10 acres of the festival grounds. Throughout the festival, brewers will compete for the Best Artesian Beer Trophy that is voted on by the 3,000+ attendees.

Tumwater Artesian Brewfest is more than just beer as there are plenty of food trucks and fun games to be played. A few of these games include Life Size Beer Pong, Cornhole, Giant Jenga, Life-size Foosball and our favorite, the Beer Stein Holding competition. During last year’s fest this was a crowd favorite and proved to be a challenge for many of the contestants.

Tickets are now on-sale at $20.00 each that includes event admission, tasting glass, and five tasting tokens. Advance tickets can be purchased by clicking here and will be sold until 11:00pm on Friday, August 19, 2016. After that time tickets will only be available at the entrance gates at $25.00. Designated driver tickets are $10.00 in advance or $15.00 at the gate and include event admission and unlimited soda and water.

Parking at the event will cost $5.00 per car and its cash only. Travel north on Capitol Blvd, then take a right on E Street go straight thru yellow gate and cross over the Deschutes River bridge which takes you down into the old brewery truck lot. The Parking is open from 12:30pm until 9:00pm. You will have a short 5-minute stroll from the parking lot to the event. Shuttles available for those who require assistance.

And if you want to learn more about Tumwater’s brewing history, South Puget Sound Community College is offering a Historic Brewery Tour of the original Olympia brewery. This history tour will take place on Saturday, August 20 at 330 Schmidt Pl SW in Olympia from 8:30am until 11:30am. Paul Knight, who began his lenghty brewing career at Olympia in 1961, will lead the tour. He even helped train a craft brewing legend, Larry Sidor, founder of Crux Fermentation Project and formerly the brewmaster of Deschutes Brewery, when he spent a good portion of his early brewing career at Olympia.

On a walking tour of the building and surrounding landscape, you’ll hear about the story of the Schmidt family, where they came from and why they settled in Tumwater, and learn about the City of Tumwater’s efforts to partner with entities to spur the redevelopment and growth of the area and the Craft Brewing and Distilling Center concept. More details on the Historic Brewery Tour can be found here, including purchasing tickets that cost $25.00 each. If you cannot make this Saturday’s tour there will be one on Saturday, September 24, 2016.

(Last August we attended the Tumwater Artesian Brewfest and attended the Historic Brewery Tour and enjoyed a complimentary stay in downtown Olympia, Washington at the Double Tree Hotel. The nights stay and days festivities was provided by the Visit Olympia Tourism Council.)