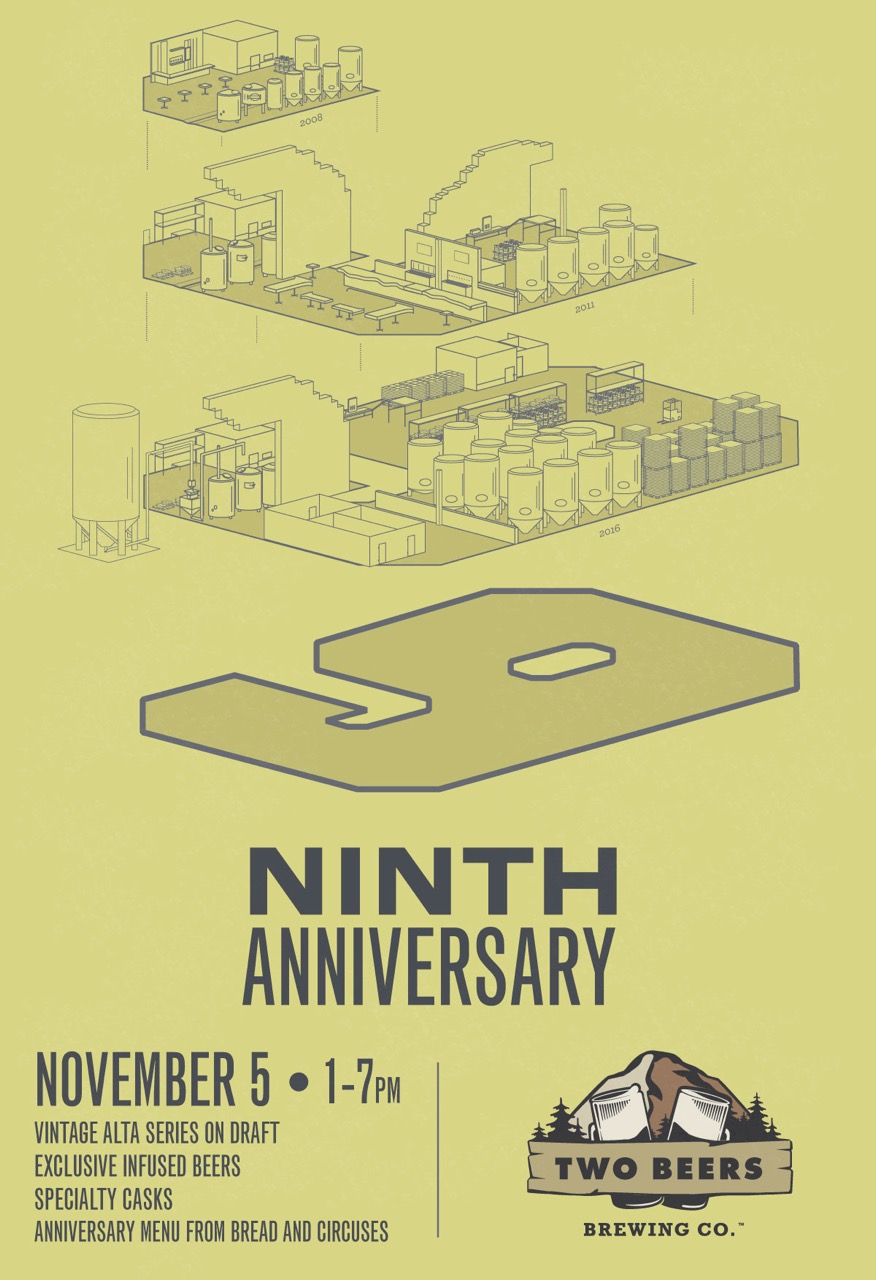 SEATTLE (October 27, 2016) – On Saturday, November 5, Two Beers Brewing invites craft beer lovers to join them as they raise a glass to nine exciting years of brewing! Celebrating their anniversary from 1-7pm at their SoDo tasting room – known as The Woods – the team at Two Beers Brewing has dug into the cellar and opened the barrels for a tap lineup you won’t want to miss. In addition, Two Beers Brewing’s winter seasonals – Jive Espresso Stout and the new Tipsy Toboggan Winter Ale – will make their debut on tap and on the shelves.

“I’m proud and amazed by how far our brewery has come in nine years,” said Joel VandenBrink, founder of Two Beers Brewing Co. “To look back at the 170 square feet we started in and how much we’ve grown as a team is inspiring. We’ll continue to push the boundaries as we enter into our tenth year and I can’t wait to see what the future holds.”

With 18 taps and two casks, Two Beers Brewing’s ninth anniversary tap list has something for everyone. Offering everything from tried and true year round brews to verticals of the brewery’s popular Alta Series – including retired beers pulled from the cellar such as Ascension 2013, High Divide 2013 and more – the growing brewery is pulling out all the stops. Special anniversary-only taps include:

Select ciders from Seattle Cider Company will also be on tap, with a special anniversary menu available for purchase from Bread and Circuses. For more information about the upcoming anniversary party, be sure to follow Two Beers Brewing on Facebook, Twitter and Instagram (@twobeersbrewing), or visit www.twobeersbrewery.com.

About Two Beers Brewing Co. ®Two Beers Brewing Co. began operations in a small Seattle basement in 2007 and today, produces more than 14 unique beers including year rounds, seasonal and a host of intricate infusions in its SoDo-based brewery. Two Beers Brewing can be found in Seattle-area bars and restaurants, with tastings kegs and growler fill-ups available at their tasting room located at 4660 Ohio Ave. S. in SoDo, open weekly Tuesday – Thursday from 3-9 pm, Friday from 1-10pm, Saturdays from 1-10pm & Sundays from 1-6pm. Select brews can also be found in 12-ounce cans and 22-ounce bottles through the tasting room, as well as local retailers in Washington, Oregon, Alaska and Idaho. For more information, visit www.twobeersbrewery.com.